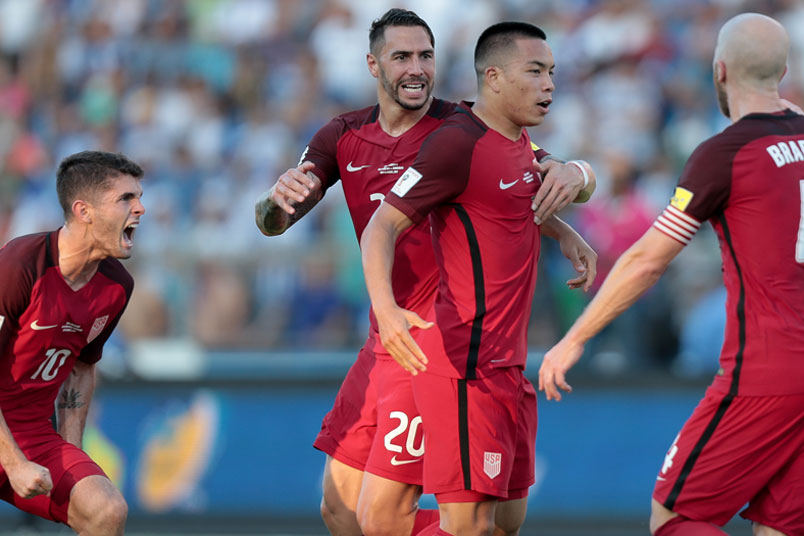 By Jason Davis – WASHINGTON DC (Sep 6, 2017) US Soccer Players – In the 85th minute of an ugly CONCACAF World Cup qualifier in San Pedro Sula, Honduras, substitute forward Bobby Wood flicked the ball past Honduras goalkeeper Luis Lopez from a goalmouth scramble. The goal brought the score line level at 1-1. That was enough for a point towards qualification for next summer’s World Cup

The goal doesn’t make everything rosy. It doesn’t clear up the concerns about the state of the team moving into the last two matches of the Hexagonal round of World Cup qualifying. The 84 minutes of play that came before Wood’s tally were dreary, depressing, and ineffectual. There are real questions about the depth of the squad in numerous positions, illuminated as they were by Arena’s decision to rotate heavily in the second game of this set.

Arena himself isn’t interested in impressing anyone or proving to the fan base that he can get the team playing fun, free-flowing soccer. At least not yet. Arena’s task, as he has stated many times since taking over for the ousted Jurgen Klinsmann late in 2016, is to get the United States qualified for Russia. With that lone task in mind, the USMNT achieved the minimum in Honduras and is now a little bit closer to locking up their place in the 32-team field.

Tuesday’s performance might not have been the subject of so much angst if it hadn’t been for the loss to Costa Rica on Friday night in New Jersey. The irony is that the Americans played much better against the Ticos but failed to get a positive result.

A pair of mistakes and an inability to beat Keylor Navas put the pressure on the game in Honduras on Tuesday. That was bad news for Arena and the team from a perception standpoint. The disappointment of the Costa Rica loss was certain to influence the Honduras game. The conditions in San Pedro Sula almost guaranteed the match would be ugly.

Whether in response or according to plan, Arena turned his team over. He switched out seven players who had started against Costa Rica, only one forced with Jozy Altidore lost to yellow card accumulation. Arena leaned heavily on MLS players against Honduras because of concerns about the fitness levels of those players just getting into the European season.

The natural question around all of those changes and the shift in formation required to accommodate them is whether they ruined any chance the USMNT had at carrying some continuity of play into the game. Long grass or not, the US passed poorly and failed to maintain a grip on possession for any significant length of time. That meant chances to create in front of the Honduras goal were few and far between. Even after going down a goal, the Americans never put together the type of sequences necessary to create real belief they could find a goal and get a point.

Honduras did what national teams have been doing since time immemorial. They took advantage of local weather and manipulated stadium and field conditions to make it very difficult for their opponents. The Honduran federation choose to kick the match off at 3:30pm local time. The better to ensure it would be hot and humid. They kept the grass extremely long at the Estadio Olimpico Metropolitano. The government of Honduras declared a national holiday to give fans freedom to attend the game.

It’s tempting to toss out the quality of the performance and focus only on the point. Take nothing for granted when it comes to CONCACAF qualifying. The history of CONCACAF qualifying has plenty of examples of “better” teams going to places like San Pedro Sula and coming away with less than they hoped. Even wins earned in those places can be turgid, painful affairs that appear to suck the talent out of players.

At some point, the United States needs to graduate from just getting by in places like San Pedro Sula to something more obviously dominate. There are always excuses. They become cheaper with every cycle. The change in coaches and Arena’s task of pulling the Americans back into the qualification places doesn’t forgive everything.

Honduras is, after all, the same nation that the US beat 6-0 in San Jose just a few months ago. It strains credulity to think the Catrachos got that much better or that the Americans became that much worse. Does an elevated air temperature and a slow surface grant a pass for scratching out a 1-1 result?

Wood’s goal and the point it brought means the US heads into the final two qualifiers next month favored to lock up an automatic spot for the World Cup. Even Panama jumping over the Americans after the September games doesn’t change that. Panama will visit the US next month, giving the USMNT control of their own destiny on the road to Russia.