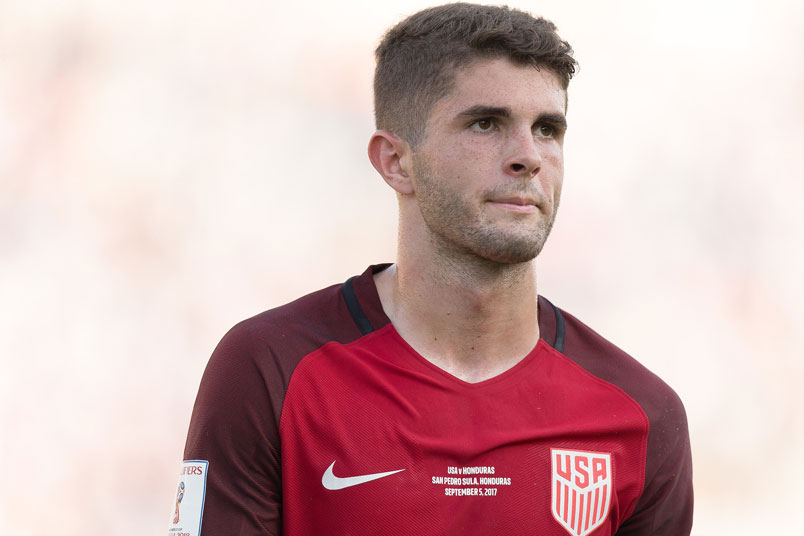 By Charles Boehm – WASHINGTON DC (Sep 14, 2017) US Soccer Players – It’s been a week since the USMNT wrapped up September’s World Cup qualifiers. The noise from media and fans has scarcely dropped a decibel. There’s justification for some of the criticism. Some of it not so much. A few of the less articulate outbursts barely even deserve the term.

One topic of discussion does merit a longer look. The analysis of Christian Pulisic’s role and positioning.

The USMNT’s wunderkind has completed the step up from fresh-faced prospect #10 wearing linchpin in record time, arguably even faster than Landon Donovan did at the turn of the century. He’s already scored seven goals in 18 career USMNT appearances, with four goals and three assists in 2017. Many see him as both the youngest player on the team and its most important.

Importance is a deeply subjective term, but not a wrongheaded one given his stellar abilities. Borussia Dortmund’s prized young playmaker brings elite vision, energy, and skill on the ball to the Yanks’ attack. Over the past year or two he’s faced and come to grips with nearly every new challenge put in front of him for both club and country, and done so with style. Inevitably, all that progress meets with increased hype, scrutiny, and expectation. This week encapsulates that.

Referring to his performances in the wake of “this month’s brutal international break,” ESPNFC’s Chris Jones put Pulisic under the microscope for Dortmund’s UEFA Champions League loss to Spurs in London on Wednesday.

“He was roughed up in a humiliating home loss for the Americans against Costa Rica, and he didn’t fare much better in the semi-disaster away to Honduras,” wrote Jones. “His return to Germany saw one of his least consequential club performances – perhaps coincidentally, perhaps not. Dortmund dropped crucial points in a 0-0 draw to mediocre, 10-man Freiburg, failing to win against them for the first time in 13 matches. Pulisic was asked after whether the weight is beginning to tell. ‘This is how professional soccer is now,’ he said. ‘Of course, it’s a lot. … I’m just trying to find the balance.’”

The kid from Hershey, Pennsylvania did not turn in his best US performances against Costa Rica or Honduras. Some of this is due to an inevitable regression to the mean after so many glittering displays in previous games. In other words, the kid was due for an off night or two.. Give some credit to the opponents as well.

A savvy Costa Rican side applied heavy amounts of marking and physical play to prevent him from beating them. Their 2-0 road victory says the tactics worked. Honduras took a similar tack, aided by their carefully-crafted home-field advantage of heat, hostility, and playing surface. The USMNT was glad to escape with a 1-1 draw.

It’s tempting to claim that Pulisic struggling is the reason the team as a whole did, too. Of course, it’s easy to reverse that. No one individual, save perhaps the Messis and Ronaldos, can carry an entire national team in the modern era. Yet his quality is such that teammates and spectators alike are naturally eager to make full use of his abilities and watch him express himself. It’s no stretch to reckon that a more impactful Pulisic will very rapidly raise his team’s overall output.

Journalists Taylor Twellman, Kyle Martino, Leander Schaerlaeckens, Simon Evans, and others engaged in an interesting Twitter conversation on Thursday about Pulisic’s best deployment. Is Bruce Arena failing to maximize his young star’s gifts? Does Dortmund’s setup hold any lessons for the USMNT? Or are too many variables just too different in the comparison?

Arena has made clear that Pulisic has license with the US to roam the field in whatever way makes him most dangerous to the opposition. The teenager has a strikingly sharp and mature head on his shoulders in both soccer and life terms. Is it possible that his country could get more out of him by asking less, at least in terms of the depth and complexity of his tactical tasking?

To my eyes, Pulisic’s most unique and prized moments – the plays that get you out of your seat – have come from exploiting pockets of space and forcing defenders, particularly fullbacks, to make difficult decisions at high speed. He can go around the corner or he can slash inside, the latter done best with quick combinations and overloads in tandom with like-minded teammates. Though he’s shown comfort on both the left and the right flanks, Paul Carr’s heat maps above hint that perhaps what works for Dortmund may be worth a try for the USMNT.

It’s no great shock to see a team like Costa Rica address Pulisic’s threat with clustered ranks of defenders and some rugged tackles. The referees have a prominent role to play in the latter. His teammates should help with the former. Lately the USMNT has struggled to change the point of attack at speed, the simplest way to punish teams that pay excessive attention to him. A collapsing web of helpful defense should expose inviting gaps elsewhere.

It’s also worth asking whether the more-or-less traditional 4-4-2 formation used more often than not fosters that gambit. That seems to be Arena’s favored default. A 4-2-3-1 or in situations that needs it a 4-3-3 could unleash Pulisic and bring the balance that will help him do so.

It’s not too soon to tone down his defensive responsibilities, either, to allow him to direct more energy to creation. A second defensive midfielder alongside Michael Bradley would be a step in that direction, without sacrificing too many of the advanced attackers needed to provide passing options. How about giving Pulisic a wide attacking role in a 4-2-3-1, with the clear directive to beat his fullback and unbalance the enemy’s back line?

Pulisic’s most electric weapon is that rare marriage of quick feet and quick decision-making against even a slightly hesitant defense. Modern soccer has turned the concept of the “free role” into a kind of talisman, a great compliment to those special players. It’s hardly a simple role. The kid from Hershey might appreciate some simplicity when October’s must-win qualifiers arrive.