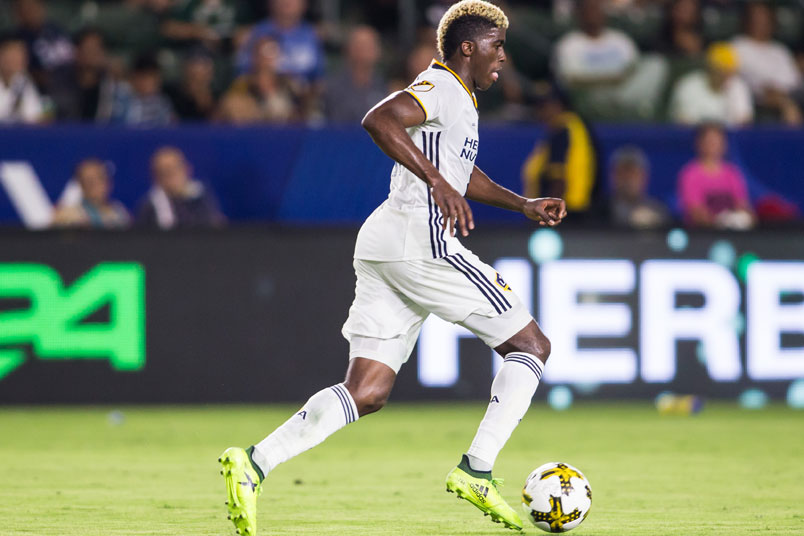 By Luis Bueno – RIVERSIDE, CA (Sep 14, 2017) US Soccer Players – In their last two games, the LA Galaxy has compiled four points on the strength of a home win and road draw. While that is not exactly a torrid pace, it does account for the longest unbeaten run the Galaxy has had since mid-June.

Part of the Galaxy’s success has been Gyasi Zardes. The beleaguered striker has scored a goal in each of those two matches. For a team that has been as goal-starved as the Galaxy has been in 2017, two goals from Zardes is a bona fide boon.

Perhaps no other player has typified the Galaxy’s miserable season than Zardes. Pegged as a key player entering the season, Zardes has instead suffered through a trying summer. The pair of goals he scored against Colorado and Seattle have been his only goals this year.

The hope within the club is that Zardes will continue to fill the nets over the remainder of the 2017 season. If Zardes is able to get back on track, that may bode well for the future. Still, counting on him to be the scoring lynchpin the team sorely lacks would be unrealistic.

As the Galaxy begin to look ahead to 2018, atop the club’s wish list should be a striker. While a porous defense and shaky goalkeeping have helped lead the Galaxy down a hole into what has been a miserable 2017, the club’s attack has only complicated matters. The club’s tailspin towards the bottom of the table mirrors their attacking numbers which are worse than ever. This is certainly not typical of LA Galaxy clubs from the recent past.

Zardes has been unable to meet the expectations placed on him after a standout 2014 season. While he is a fine talent, the Galaxy needs a true forward who can come in and be a difference-maker.

Since 2005 the Galaxy has finished outside of the top three in the Western Conference in goals scored just twice, in 2009 when the Galaxy reached MLS Cup and in 2006. Under former coach Bruce Arena, the Galaxy scored fewer than 50 goals three times, 36 in 2009, 44 in 2010, and 48 in 2011. The Galaxy reached MLS Cup, the Western Conference final, and won MLS Cup in those years, though. Back then, the club had a standout defense to fall back on. This year’s team needs to score 14 goals in the club’s seven remaining games to avoid finishing fewer than 50 goals for the first time since 2011.

Goals are not always a precursor for success, though. The Galaxy led the league in goals in 2008, a tumultuous season that, like this year, saw a coaching change midway through the campaign.

Still, goals had not been hard to come by, at least not in this decade. Part of that has been the club’s spoils of having had Landon Donovan and Robbie Keane around, as well as players like David Beckham helping fuel the attack. Also, with a strong defense the Galaxy and been able to suffocate teams and beat teams either with possessing the ball and creating chance after chance, hitting teams on the counterattack, or both.

The lack of goals in 2017 does not fall squarely at Zardes’s feet, but his lack of production is troubling. Zardes scored 16 goals in 2014, his second season with the club, and the Homegrown Player seemed destined to take off. Instead, his production waned. He had just six goals the year after and another six in 2016. Since the end of 2014, Zardes has scored 14 goals in 67 matches.

Injuries have played a part in that as Zardes missed the last few months of 2016 and the beginning of 2017 with various injuries.

Former coach Curt Onalfo had problems finding a spot for Zardes before his firing. Was he a winger? A striker? A wide forward? The players around him caused a bit of confusion in trying to fit him in. Giovani Dos Santos has not clicked with Zardes the way Keane did.

Perhaps that is the key for 2018. Zardes can be productive if he has a strong forward playing at his side. To get the best out of Zardes, the Galaxy needs players like the ones the club was chasing over the summer. Zlatan Ibrahimovic was a Galaxy target before a knee injury ruled him out for the rest of 2017. Others like Boca Juniors’ Dario Benedetto and Andre-Pierre Gignac from Tigres UANL didn’t pan out. Each player would have been instantly given the team a boost on the attack. Instead, the Galaxy instead opted for midfielder Jonathan Dos Santos, a fine talent but not the front-line attacker the club lacks.

Zardes is a strong talent and can be a productive scorer. Like the Galaxy overall, he needs a reliable forward playing alongside him. If the rest of the season is an audition for Zardes and this version of the Galaxy, then the team should quickly see that Zardes is in need of another Keane to feed off of and find space among the backline as defenders key on that other striker.

Overall, goals will be an area where the Galaxy will need to get better. Defenders, a number one goalkeeper, and depth across all positions are also important. A forward the likes of Benedetto or Gignac would instantly make Zardes and the Galaxy overall a force in the Western Conference once more.