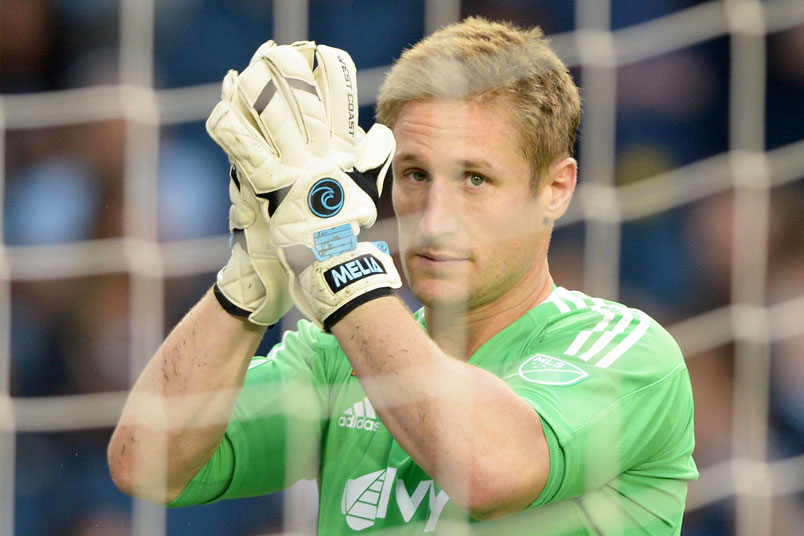 By Clemente Lisi – NEW YORK, NY (Sep 18, 2017) US Soccer Players – Sporting Kansas City’s Tim Melia is having the best season of his career. He’s in the conversation for the league’s Goalkeeper of the Year award.

Melia ranks among the league’s best in a series of major categories, including goals-against-average, shutouts, penalty saves, and overall save percentage. He’s one of the reasons why Sporting KC remains in the playoff hunt and could very well make a run at the MLS Cup title.

After paying his dues as a backup, the 31-year-old Melia has shined since becoming a starter with Sporting KC in 2015. Since then, Melia has dazzled fans with jaw-dropping saves and the incredible ability to cover his goal. He’s already part of a KAnsas City goalkeeping tradition with names like Tony Meola and Jimmy Nielsen. Melia has an impressive 0.77 GAA, 10 shutouts, three penalty saves, and a 79.6 save percentage.

What Meola and Nielsen have that Melia wants, however, is an MLS Cup. Before the team can focus on that, they have a shot at another trophy. On Wednesday, Sporting Kansas City hosts the US Open Cup against the New York Red Bulls at Children’s Mercy Park (ESPN2 – 9pm ET). While the Red Bulls have a strong attack, Sporting KC features Melia in top form. In 28 MLS games played, he has given up just 22 goals. Melia’s 84 saves are a personal best for him since entering the league in 2010 with Real Salt Lake, where he was an apprentice to Nick Rimando.

Prior to that, Melia finished his NCAA career in 2006 as one of the top goalkeepers to ever attend Lynn University in Florida. He also played for the Rochester Rhinos in the USL First Division with loan spells at the Charleston Battery and the now-defunct FC New York before signing an MLS contract. He also played for Chivas USA for three seasons starting in 2012, serving as backup to Dan Kennedy.

We caught up with Melia to talk about the upcoming US Open Cup final, the final stretch of the MLS regular season, and how this country’s lower leagues helped him prepare for Major League Soccer.

The US Open Cup final will feature your Sporting Kansas City against the New York Red Bulls. Did you want to play the Red Bulls or would you have preferred facing a surprise side like FC Cincinnati?

I don’t think the opponent is as important as having the game at home. Having our fans and the environment behind us is most important for us in a final.

How important is it to win the US Open Cup?

It’s everything to us. It’s another feather in the cap and having a trophy in your backpack in the middle of the season. It’s something that at this club we take very serious. It’s extra confidence. Any time you have the chance to win a trophy, with a chance to get into a CONCACAF Champions Cup bid the following year, it’s just another huge tournament we can play in.

This is a key time for Sporting Kansas City as it gears up for the playoffs. Has playing in the US Open Cup been a positive or only served as a distraction?

I think it’s a positive. It showed us in Open Cup games that we are a team that can grind out results, whether we are down a man or down a goal. It gives us the energy to get results and momentum going forward. I think we can be a very tough team to play against later in the season.

The Western Conference, for the first time in years, appears weaker than the Eastern Conference. Have you noticed a difference and how will that play out this fall?

I don’t think it’s weaker. I think some of the teams weren’t as strong as years past and have had some major adjustments. I think there’s a bit more parity on the West coast and knowing how important those results are. Eastern coast opponents are games we can really go after and go for.

You played both college soccer and in the USL. How important was it to play at those levels to prepare for MLS?

Everything. As a goalkeeper, it’s really hard to get rhythm and games. There is only one goalie and that goalie is there for a good amount of years. Getting those games in college, one of the most important parts when you make that collegiate selection, it’s important even if it’s a lower division or lower pedigree of school. Also, in the USL, as a goalkeeper, you can get the chance to start instead of riding the bench or not dressing in MLS.