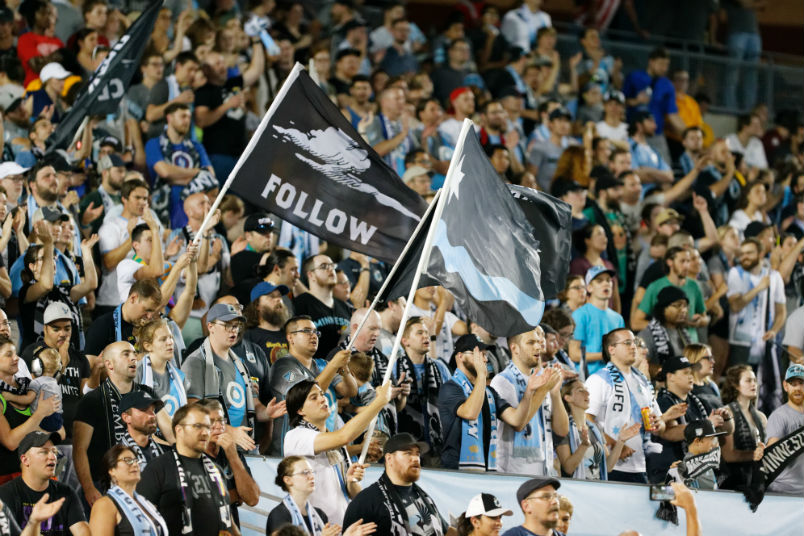 Week 29 of the 2017 Major League Soccer season saw MLS making a big national television play. Their broadcast partner Fox put two games on their national over-air schedule, though that didn't mean national coverage. Due to NFL commitments, the MLS games were market-dependent with plenty of parts of the country opting to show the late game between Atlanta United and Montreal.

Atlanta took all three points at home with a 2-0 shutout of the Impact. Hector Villalba scored in the 28th minute with Jeff Larentowicz adding a goal in the 73rd. Brad Guzan made two saves to keep the clean sheet.

"That’s what I’m saying let’s talk about the defense right!," Guzan said. "We have got some exciting attacking players. We have got guys that can go and score goals out of nothing. We have guys that can combine and get some unbelievable goals. At the same time, you look at the guys in the back line that provide width,that provide the base for allowing those guys to go do their thing on the attacking side of it."

Week 29 started with NYCFC and Houston drawing 1-1. Due to Major League Baseball commitments at Yankee Stadium, NYCFC had to relocate this game to East Hartford, Connecticut. Maxi Moralez put NYCFC up in the 6th minute with Houston's Mauro Manotas equalizing in the 16th.

"I wasn’t displeased at all," Toronto coach Greg Vanney said. "I thought the guys gave a great effort. I thought a lot of guys stepped into sort of new roles. I thought we moved the ball. I thought we did what we would do. Do our best to keep possession of the ball, make it difficult for them so that we could minimize the amount of crosses and service and things like they could get to their big forwards. I thought we did a pretty good job of that."

DC United shutout San Jose 4-0 at RFK Stadium. Patrick Mullins scored all four goals. Paul Arriola assisted on Mullins's goals in the 57th and 60th minutes with Mullins scoring unassisted in the 68th and 88th. Steve Clark made one save to keep the clean sheet.

"I knew where they sit in the East," San Jose coach Chris Leitch said. "But I also know what they've done throughout the year, with the guys they've brought in and how they've been playing, especially as of late. They've beat some really good teams this year and they've just played overall a lot better. It's a tough team to break down defensively to put a lot of numbers behind the ball and then offensively they've gotten to the point now in this part of the season where I think they have a pretty good understanding of kind of how they move the ball. For me, it wasn't a trap game."

Philadelphia beat Chicago 3-1 at home. Chris Pontius scored for the Union in the 10th minute, doubling the lead in the 55th. CJ Sapong made it 3-0 Philadelphia in the 64th. Luis Solignac pulled a goal back for Chicago in the 67th.

"Congratulations to Philadelphia on three points," Chicago coach Veljko Paunovic said. "I don't think it's a moment now to go back and analyze too much, go too deep, we have to move forward. Obviously we're not happy with the performance nor the result, but credit to our guys for pushing hard until the end. I think this team never gave up and tried, after we scored the first one, we tried to push and score the second which would have helped us obviously in order to get the point at least but it didn't happen."

Columbus beat the Red Bulls 3-2 at home. Jonathan Mensah put the Crew up in the 6th minute with Bradley Wright-Phillips equalizing in the 14th. Justin Meram returned the Crew lead in the 54th with Josh Williams making it 3-1 in the 66th. Federico Higuain assisted on both goals. Gonzalo Veron converted a 72nd minute penalty to pull New York within a goal.

Minnesota came from behind to beat Dallas 4-1 at home. Tesho Akindele put Dallas up in the 14th minute. Christian Ramirez equalized in the 24th and assisted on Miguel Ibarra's goal in the 35th and Ethan Finlay's in the 71st. Abu Danladi scored United's fourth goal in the 88th minute. Dallas played a man down from the 81st with a red card to Akindele for a serious foul.

"We started the game with a lot of intensity and created a lot of options to score," Dallas coach Oscar Pareja said. "And then suddenly the game just changed. It started a roller coaster for us. In the second half, we were very disorganized defensively. I have to take full responsibility not just for that, but for the way we managed the game."

Real Salt Lake shutout Seattle 2-0 at Rio Tinto Stadium. Jefferson Savarino put RSL up in the 52nd with Luke Mulholland doubling the lead in the 66th.

“We talk a lot about we are at home, we're at home, and we're a very dangerous team at home," RSL coach Mike Petke said. "Altitude plays a part for every team, so we don't want teams to come in and take it to us in the first 20 minutes because they know they are going to tire out. We want to take it at them and I thought yes we did at times but I think I said I thought it wasn't our best 45 minutes."

Vancouver beat Colorado 2-1 at BC Place. Fredy Montero scored for the Whitecaps in the 4th minute with Dominique Badji equalizing in the 45th. Montero assisted on Yordy Reyna's goal in the 54th minute.

Sporting KC beat the Galaxy 2-1 at home. Daniel Salloi put Sporting up in the 18th with Diego Rubio assisting. Rubio doubled the lead in the 35th. Romain Alessandrini scored for the Galaxy in the 58th minute.

"Being a hot day, if you try to force things it can make you tired and those opportunities start failing to present themselves," Sporting KC defender Graham Zusi said. "I thought we were smart with it, kept the ball when we needed to and after 15, 20 passes, having them chase the ball for that amount of time, eventually something opened up that we can get a really good opportunity."

Week 29 concluded in Portland with the Timbers playing a man up for most of the second-half in a 3-0 shutout of Orlando City. Diego Valeri had Portland up in the 15th from the penalty spot. Darren Mattocks doubled the lead in the 29th. Orlando's Jonathan Spector saw a second yellow in the 47th for unsporting behavior. Valeri scored again in the 59th. Portland's Jeff Attinella kept the clean sheet.