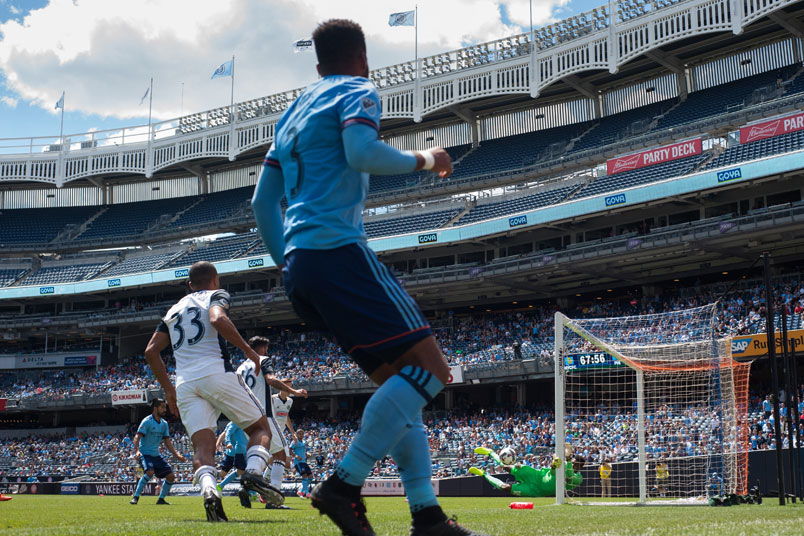 Either way, the key to the gambit was tying the new franchise to the city. The Red Bulls are fine for New Jersey. It’s not a problem that they call themselves “New York”. It’s that so many of the soccer fans east of the Hudson didn’t care after two decades. Missing out on all of those potential fans almost forced the league’s hand. With a new national TV deal and pressure to deliver the biggest market in the country, MLS handed a team to City Football Group. That happened despite an unfinished search for a site to build a stadium somewhere in the five boroughs.

The club’s marketing during the buildup to their launch pushed the idea that NYCFC was a team for the city. An agreement to play in Yankee Stadium ensured that they would, at least for their first few years, represent New York while playing in New York. A few seasons in the Bronx would presumably give CFG a chance to line up a place to build a proper soccer venue within the city limits, maintaining the club’s carefully crafted image.

The search is now the story even as NYCFC closes in on the playoffs in their third season. The pressure is on because even identifying a site now likely means months and months of red tape before a laborious building process can begin. It’s New York, after all, one of the most complicated real estate markets in the world.

There’s little doubt that CFG and MLS are working toward finding a spot somewhere in New York City to build a soccer stadium. With so many roadblocks, including a recalcitrant mayor’s office, the search is a difficult one. This has pushed the team to consider options that are, for lack of a better description, less-than-ideal.

Options like a redevelopment of Belmont Park on Long Island, a site the state of New York has opened up for bidding by interested parties. If the location sounds familiar, it should. Not only is Belmont Park home to the Belmont Stakes Triple Crown horse race, it’s the same site that the New York Cosmos once eyed for their own soccer-specific stadium. The Cosmos plan called for a 30,000-seat venue with sweeping lines and a host of mixed-use elements to fill out a complete complex.

The Cosmos even went so far as to produce renderings of what their proposed Belmont Park venue would look like. Like so many stadium renderings that made their way around American soccer in recent years, it stirred up imaginations about what the Cosmos might achieve with such a home. What would have been a triumph for the Cosmos, a team for whom any purpose-built venue would have been a game-changer, would be a disaster NYCFC. Belmont Park isn’t in New York City. Long Island isn’t one of the five boroughs. The team dropped into the city that never sleeps isn’t supposed to find itself trying to entice New Yorkers out to the edges of what constitutes “real” New York.

This all comes up because reports have NYCFC “reluctantly” bidding on the Belmont Park site. The thinking goes that the club simply can’t pass up the chance at a plot of land ready for a stadium. Any possibilities within the city limits subject the club to a more difficult process. Stories from Newsday and others suggest that NYCFC doesn’t really want to bid for Belmont, but almost feels like it has to.

Belmont Park is near the Nassau County/New York City border. It’s still in Nassau County. In this case, close doesn’t cut it. Close is failure. It’s a potentially serious problem for a club with so many fans north of the city and/or dependent on public transportation to attend games.

When forced to move out of the city for one game last weekend, NYCFC drew a painfully sparse crowd to Pratt & Whitney Stadium in Connecticut.

The half-hearted interest in Belmont Park only crystallizes the series of questionable decisions that led to the club’s birth and awkward placement in a baseball venue. In a desperate bid to fill the New York City void and find a second team to enter the league with Orlando City, MLS rushed into the expansion in New York.

They can’t correct that now. There’s no reasonable argument for doing anything but moving forward with NYCFC. The questions now are not all that different from questions that faced clubs like FC Dallas, the Colorado Rapids, and the Chicago Fire a decade ago. When given the chance to built stadium outside of the immediate hubs of the cities they represent, those teams took leapt at the opportunity. Whatever attendance struggles or lack of civic relevancy they gained is justifiable. No American soccer club should look a gift stadium in the proverbial mouth.

Should NYCFC continue to wait? Should their uncomfortable squatting at a baseball stadium last the near-decade it might take to build something local? Or is Belmont Park and the shorter timeline it represents worth the move outside of the city limits? Will it open New York City’s team up to the same criticism that kept the Red Bulls from capturing New York hearts for so many years?

It gets dark for NYCFC very quickly imagining the likely scenarios should they choose either path. Yankee Stadium won’t work forever. Belmont Park represents a failure to meet their promise.

NYCFC president Joe Patricof has heralded the clubs ability to one day become “one of the biggest clubs in the world.” Before they can do that, NYCFC will have to sort out the small problem of where to put a large stadium in one of the most congested cities on the planet.