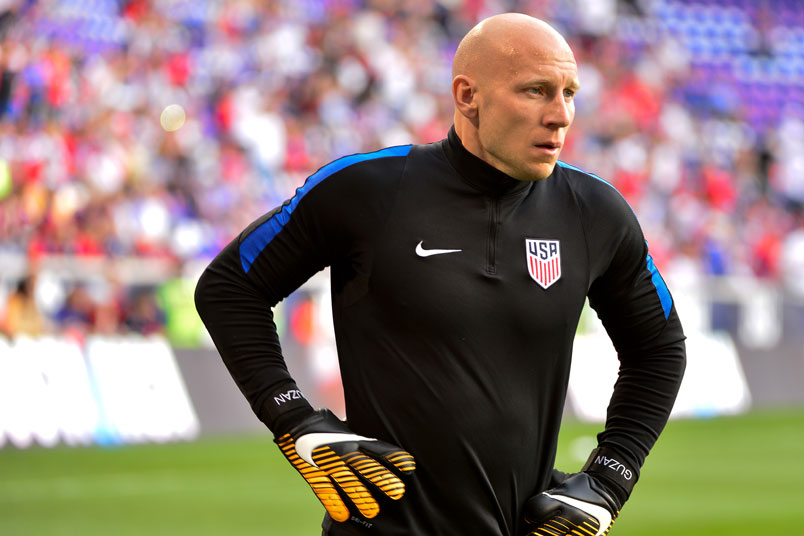 By Charles Boehm – WASHINGTON DC (Sep 29, 2017) US Soccer Players – After their club matches this weekend, the USMNT will gather again, this time in Orlando, Florida, for one more pair of CONCACAF World Cup qualifiers. The 2018 Hexagonal concludes with games against Panama and Trinidad & Tobago. These are the final two opportunities for the US to overcome the many missteps and wobbles of this World Cup cycle and book their place in Russia.

Four points from these two games might just be enough to regain the third and final qualification spot. Six may be necessary, though, if Honduras manage to pull off wins over Costa Rica and Mexico. A US victory at home over Panama in Orlando is effectively mandatory to avoid 4th-place and the intercontinental playoff against Syria or Australia.

The program has endured stumbles on this road before, to say nothing of the four decades of failure to qualify for the world’s biggest tournament from 1950 to 1990. Yet with the USMNT presently looking up at three teams above them in the standings, it’s hard to think of a more nervy occasion in the modern era, especially this late in the game.

Whether Bruce Arena and his men hold their nerve and get the job done or not, there will be sober reflection on how things got to this point.

Of course it’s easy, and increasingly common, to blame the players, and the talent pool.

Most of the team would probably readily admit that they underachieved in key moments. Starting off on the wrong foot with painful losses to Mexico and Costa Rica last November put the team in an early hole. Perhaps negative mental and psychological consequences cascaded downward from there.

The bolder option is to eviscerate the entire country’s sprawling player development landscape as incurably corroded and dysfunctional. “We’re just not good enough”, goes this line of thought, to manage the qualification process as smoothly as before.

I’ll save a fuller examination of that concept for another day. For now, let’s say that it doesn’t quite jibe with substantial evidence of growth and advancement, even if one grants that major inefficiencies remain. Christian Pulisic, Fabian Johnson, John Brooks, Bobby Wood, Geoff Cameron, Darlington Nagbe. These are just a few examples of high-level talents who bring rare qualities to the USMNT, and that’s before listing the veteran core of Altidore, Bradley, Dempsey, Howard, and others that’s achieved plenty in the past.

Considering what past USMNTs did with less talent than this, it just doesn’t add up. That’s the mystery, and it’s a costly one.

You’ve heard the qualifying formula a thousand times: Win at home, draw on the road. What that mantra leaves unsaid is that dropping points on friendly turf is the easiest way to find yourself watching the World Cup from home.

The USMNT’s home losses to Mexico and Costa Rica constitute six dropped points. That’s a huge debt to recover from. It’s no coincidence that those two teams are cruising to the top two spots in the Hex with undefeated home records.

Just turning those home losses into draws changes the table. A point from each of those encounters in Columbus, Ohio and Harrison, New Jersey would have the US on 11 points at present. That would put them in 3rd-place in the Hex, one point ahead of Panama and on much more solid ground heading into these final two games.

Home dominance is the foundation upon which the USMNT have built their quarter-century-long streak of World Cup participation. Before this cycle, you have to go all the way back to 2001 to find the last time the Yanks dropped three points in a Hex game on US soil. That infamous 3-2 loss to Honduras at RFK Stadium that September.

Awash in a rising CONCACAF tide

It’s said that a rising tide lifts all boats. In the bigger picture, the growth of quality and competitiveness across the region is a good thing for the USMNT. It provides them with more worthy tests before moving on to face the world’s best.

It’s only in specific cases of directly endangered self-interest, like the present, that it stings. What really annoys some in the US is that this country’s own domestic league is a significant factor in this wider trend.

MLS has made itself an attractive home for top Hondurans, Costa Ricans, and any number of other CONCACAF talents. At moments like this, it’s tempting to point a finger of blame for that. Especially when it was a San Jose Earthquake (Marco Ureña) who scored the goals that beat the US at Red Bull Arena last month. A Houston Dynamo star (Romell Quioto) who drew first blood in the 1-1 draw with Honduras a few days later. A former Philadelphia Union player (Gabriel Gomez) scored for Panama in the 1-1 draw in Panama City in March. MLS players were all over the score sheet in November’s 4-0 loss in Costa Rica.

Again, any Yanks with any semblance of wider ambition should welcome this. US soccer decided long ago that simply reaching the World Cup and being also-rans every four years was not the summit of our desires. If MLS is helping CONCACAF improve, and vice versa, then both are also helping the many USMNTers in MLS improve as well.

Of the many “what ifs” of this qualifying road, this one might be the biggest. Brooks, Cameron, Howard, Wood, and several other key contributors have missed significant time this cycle. Lineup turnover has been high even by the usual standards. The circumstances broke up preferred partnerships and important rhythms.

Injuries are an inevitable part of the process for every team. That said, there’s little sense in denying that the timing and nature of the most impactful ones have been influential these past two years.

This item follows naturally from the previous ones. The USMNT conceded just eight goals in 10 total Hex matches in the previous cycle. They gave up 13 in the 2010 Hex though their goal differential was still healthy, as they netted a whopping 19. They were even stingier in the 2006 process, allowing six goals in that Hex.

With two games to go in this one, they’ve already leaked 11. Yes, that 6-0 outburst at home vs Honduras may prove key in terms of goal difference. However, the defensive issues have left the US fighting an uphill battle.

This is a bit more abstract. The Federation’s decision to renew Jurgen Klinsmann’s contract for a second cycle ignored important lessons from the past. Not just this program’s, but from world soccer in general.

The almost inevitable stagnancy of the same regime staying in charge for another round duly set in. The team was always playing catch-up, in multiple contexts, after Klinsmann’s dismissal following the rout in Costa Rica.

The good news is that there’s still time to get the job done. Few would have wanted to leave it this late, but Mexico in 2014 is only the latest of many examples that show a rough qualifying campaign doesn’t have to impact the World Cup.