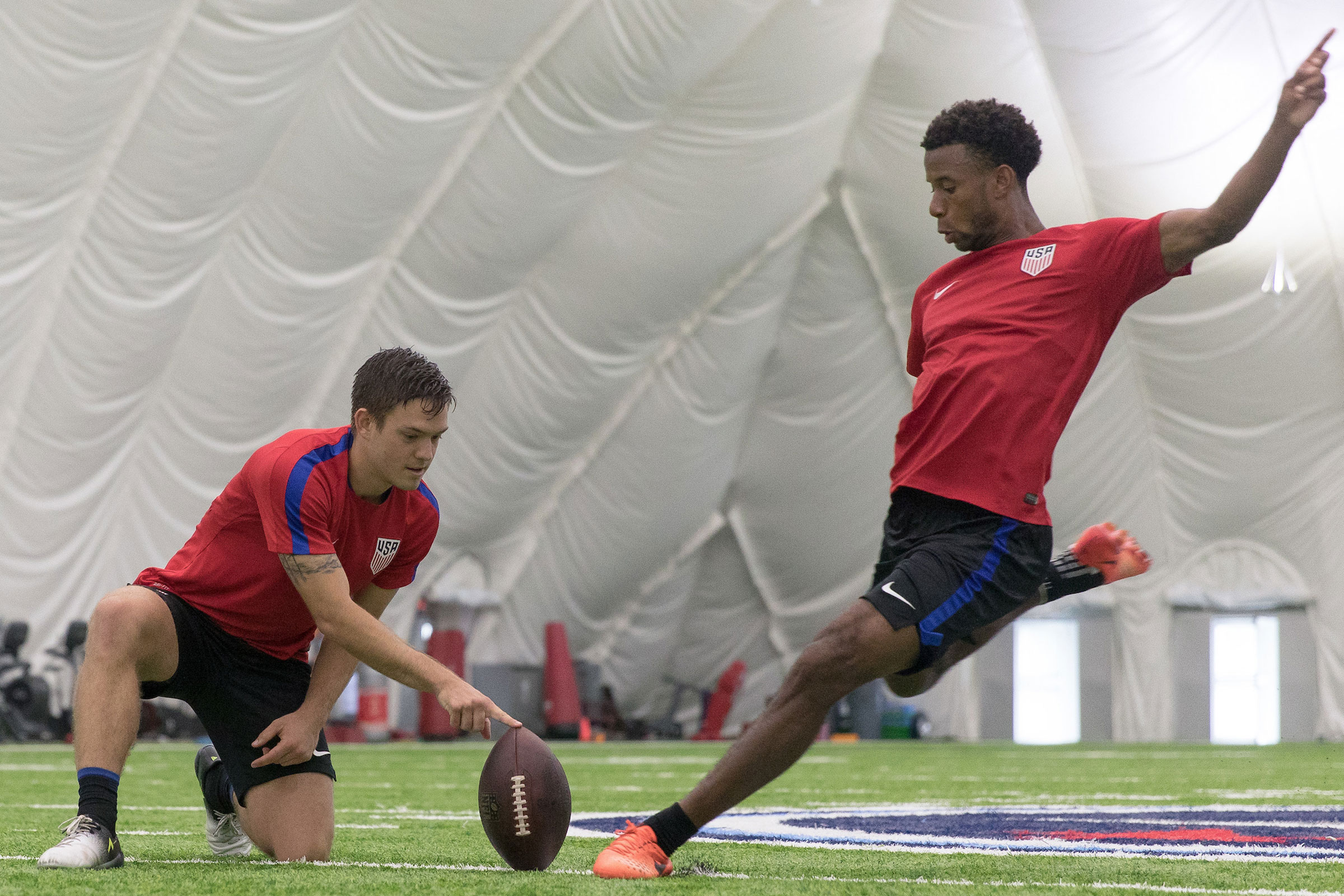 By Clemente Lisi – NEW YORK, NY (Sep 11, 2017) US Soccer Players – Millions of Americans spent this past Sunday watching football. Seven months after the New England Patriots won the Super Bowl in dramatic, come-from-behind style, the NFL returned for a new season. While the games featured lots of passing and running, there was also a fair bit of kicking.

Football is a sport where all the accolades are for quarterbacks like Tom Brady, along with wide receivers and running backs. Rarely is anybody celebrating the kicker. If you’re a soccer fan, it’s the kicking game that might impress. Converting a field goal from 40 yards out to clinch a win with only seconds on the clock is certainly exciting. Missing it has football fan wondering why they bother with kicks and punts at all. The kicker is the easy scapegoat. It may be the reason why only five kickers have ever won election to the Pro Football Hall of Fame.

It should come as no surprise that many kickers who made it in the NFL had backgrounds as soccer players. The skillset is similar. As a result, many high school players feature on both their soccer and football teams. There are several who might have been soccer stars who opted for the chance to split the uprights.

Soccer skills may not be limited to just kickers. Last month, University of Michigan coach Jim Harbaugh told the Wall Street Journal that he encourages all boys who aspire to be college players to have soccer on their resumes as children. His reason? It enhances coordination, conditioning and balance. “I think every American boy should play soccer till the eighth grade, then they should play American football,” he said.

Here are six soccer players with a gridiron connection who achieved varying degrees of success.

The South African-born forward played professionally in England with Chelsea and Millwall in the late 1960s and early ‘70s. He came to the United States to play in the NASL in 1975. Smethurst would become the Tampa Bay Rowdies all-time leading scorer with 57 goals in 65 games. His scoring grabbed the attention of the Tampa Bay Buccaneers. The Bucs signed Smethurst without even a tryout. Smethurst was ultimately cut after preseason, never playing in an NFL game. Smethurst would play for the San Diego Sockers and Seattle Sounders. He retired in 1987 as a member of the Rowdies.

The Austrian-born striker is perhaps the soccer player who had the most successful NFL career of all. A winner of three Austrian league titles with Rapid Vienna during the 1960s, Fritsch even represented his country at senior level, scoring two goals in nine matches for Austria. He had never played football when the Dallas Cowboys scouted him in 1971 and converted him into a placekicker. Although he spoke no English, the Cowboy’s signed Fritsch as an undrafted free agent. He would go on to have a 11-year NFL career and played for the Cowboys, San Diego Chargers, Houston Oilers, and New Orleans Saints. He retired in 1985 as a member of the Houston Gamblers of the United States Football League. He was a member of the Cowboys team that won Super Bowl VI in 1972 against the Miami Dolphins. He died in 2005 of heart failure at age 60.

Angoy was down the Barcelona depth chart for goalkeepers, eventually seeing action in a handful of games in the mid-90s. Johan Cruyff’s son-in-law eventually found a career with NFL Europe’s Barcelona Dragons. Considered the best kicker in NFL Europe history, Angoy had a shot with the NFL. In 1999 he accepted a tryout with the Denver Broncos. According to Angoy, it was his decision to leave the team, unaccustomed to the travel demands in the US. He played in three World Bowls with Barcelona, winning NFL Europe’s championship in 1997. His son, Jesjua Angoy-Cruyff, is a midfielder with Spanish second division club CF Reus Deportiu.

Fresh off the 1994 World Cup, USMNT goalkeeper Tony Meola decided to play for the New York Jets. The team signed Meola to a preseason contract with the hope of having him start during the regular season after the NFL moved kickoffs from the 35-yard line to the 30. The rule change put a greater emphasis on leg strength for kickoffs. Meola seemed a perfect fit. The experiment didn’t pan out. Meola was cut after the team’s third preseason game, but football’s loss was soccer’s gain. He went on to play in MLS becoming the standard for goalkeepers in American soccer’s new first division.

A goalkeeper with FC Dallas from 2008 to 2011, Lambo never played an MLS game. Disappointed with the direction of his career following a trial at DC United and Sheffield Wednesday in England that resulted in no contracts, Lambo retired from soccer at age 21. That’s when he went to college, becoming a placekicker at Texas A&M. He ended up singing with the San Diego Chargers in 2015 as an undrafted free agent. After two seasons, Lambo was released by the Chargers earlier this month after losing the starting job. He is currently a free agent.

Nicknamed “Big Toe Joe,” Julius played both soccer and football in high school. A former Philadelphia Union prospect who had represented the club at the 2012 Generation Adidas Cup, Julius declined the many offers he had to play college soccer for a shot at being a placekicker at Penn State in 2013. In addition to his powerful feet, Julius was not afraid to get physical and his powerful hits against opposing players on kickoff returns became YouTube sensations. Julius revealed last year that he had been struggling with an eating disorder and depression. As a result, he opted to sit out the current NCAA season.