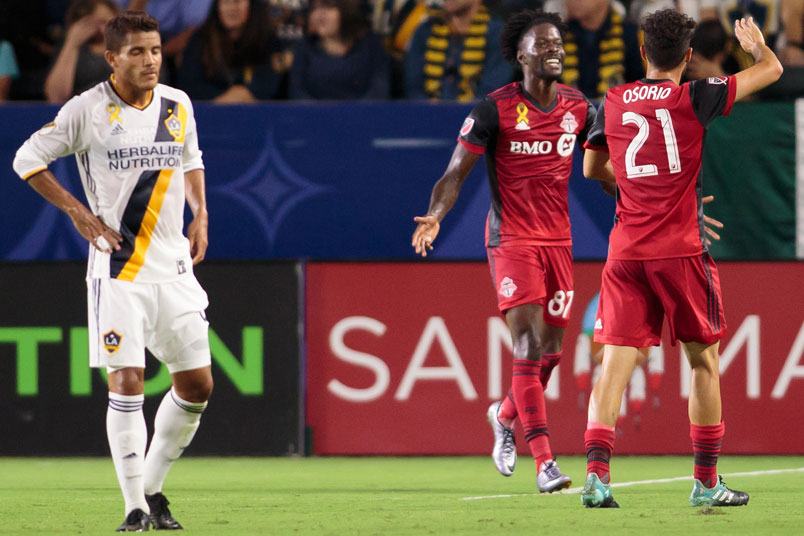 By Luis Bueno – RIVERSIDE, CA (Sep 20, 2017) US Soccer Players – The LA Galaxy has had unparalleled success in MLS, but with that success there has also been heartbreak. The Galaxy’s loss in MLS Cup 96 was a gut punch. The loss in the 99 final deflating. The MLS Cup 2001 loss stung.

The club’s 4-0 defeat to Toronto FC on the weekend may have been the worst loss in club history. Not only did the life get beaten out of the Galaxy but so too did the future.

The Galaxy is quickly becoming irrelevant and is in danger of becoming a discarded relic, a link to the league’s early days that has only history and past successes to offer. This season, the club has been nothing but a floor mat, a place for opponents to wipe their feet on as they move on to bigger and better challenges.

Whatever intimidation or intangible advantages StubHub Center provided the Galaxy in the past have vanished. The fans are unhappy and showing their displeasure by not showing up to games. This season will surely go down as the club’s worst campaign ever, both statistically and realistically.

While this might look like rock bottom, it can get worse. The club’s remaining schedule features nightmarish opponents who will certainly take no mercy upon a team that long terrorized the league.

No matter how bad it gets, though, the loss to Toronto FC was the lowlight of the season. Not only was it another reminder of how bad the team can be, it showed what the future may look like if something drastic does not happen.

There was no fight among the Galaxy players. No energy. No passion. Zero sense of urgency. The players curled up and died on the field, and that was also reflected in the stands. The announced attendance was 19,650, but if there were more than 15,000 people there for the game, that would have been surprising.

The Galaxy has always had a strong fan base but that support is eroding. Fans can only take so much negativity, especially LA fans who find it difficult to support a loser. The same reasons why the fan base grew into one of the strongest in the league are what is causing fans to do a U-turn before they get to Avalon Boulevard. Talent, winning, uniqueness.

The Galaxy has talented players, sure, but the league’s biggest stars are elsewhere. Orlando City’s Kaka, Chicago’s Bastian Schweinsteiger, and NYCFC’s David Villa have each won a World Cup and have long carried fame and stardom with them. Sebastian Giovinco’s star blazed with his own success while USMNT stalwarts Clint Dempsey (Seattle), Michael Bradley and Jozy Altidore (Toronto FC), and Tim Howard (Colorado) play nowhere near Southern California.

Perhaps counting on Landon Donovan and David Beckham for so long spoiled the Galaxy. Like its on-field success, the Galaxy set a high bar for itself with the players it brought in over the years. The club’s current roster features some strong players but nobody in the class of Donovan, Beckham, Robbie Keane, Steven Gerrard, or Cobi Jones.

Giovani Dos Santos is not in the same class as those players. Sure, he’s talented and a well-known name on both sides of the border but even within the Mexican national team fan base there are Dos Santos naysayers. Romain Alessandrini is a fan favorite now but was an unknown to more than 90 percent of that same fan base in January. Jonathan Dos Santos is a fine midfielder but he is not star caliber.

The Galaxy has had little reason to celebrate in 2017. The wins have been hard to come by. This team will finish the season with the worst points-per-game in club history. Through 27 games, the Galaxy had just 0.96 points per game. A year ago the club averaged 1.53 points per game.

In the last decade, only two teams have surpassed the 1.95 mark – the Galaxy’s 2010 and 2011 teams. Even in 2008 the Galaxy averaged 1.1 points per game. The Galaxy finish out September with games at Atlanta, at Sporting KC, at Houston, and home to Real Salt Lake. One point seems like it would be an accomplishment.

The Galaxy’s uniqueness around the league is also vanishing. Atlanta has become a bit of a model for other franchises to shoot for. The club’s roster has talented players, both international and domestic, and the team is contending for a playoff spot right away. The club is also grabbing attention for setting the league’s single-game attendance record by drawing 70,425 fans to the brand-new Mercedes-Benz Stadium on Saturday in a 3-3 draw against Orlando City. Atlanta took that title away from the Galaxy, who had held that mark since April 13, 1996 when 69,255 turned out at the Rose Bowl to watch the club’s first-ever game.

It’s not just Atlanta that is overtaking the Galaxy and dimming the club’s accomplishments. Toronto FC is a powerhouse club and looks like a sure-fire MLS Cup finalist. Seattle continues to elevate its level of success amidst a passionate fan base. If the Sounders repeat, it will be the first time since the Galaxy’s 2011 and 2012 championship clubs to accomplish the feat.

Los Angeles FC is also looming large. Already bursting with star power both in its front office with co-owners including Will Ferrell, Magic Johnson and Mia Hamm, in the coaching staff with Bob Bradley, and on its current three-man roster after signing Carlos Vela. In addition, the club’s Banc of California Stadium promises to be a sterling jewel of a facility.

LAFC will compete immediately. Perhaps nothing would be more embarrassing if LAFC reaches the postseason in 2018 while the Galaxy miss out again. That very well could happen.

This season cannot end soon enough for the Galaxy. The losses will only continue to pile up. The deeper the team sinks into the cavern it has created for itself, the tougher it will be to climb out of it.