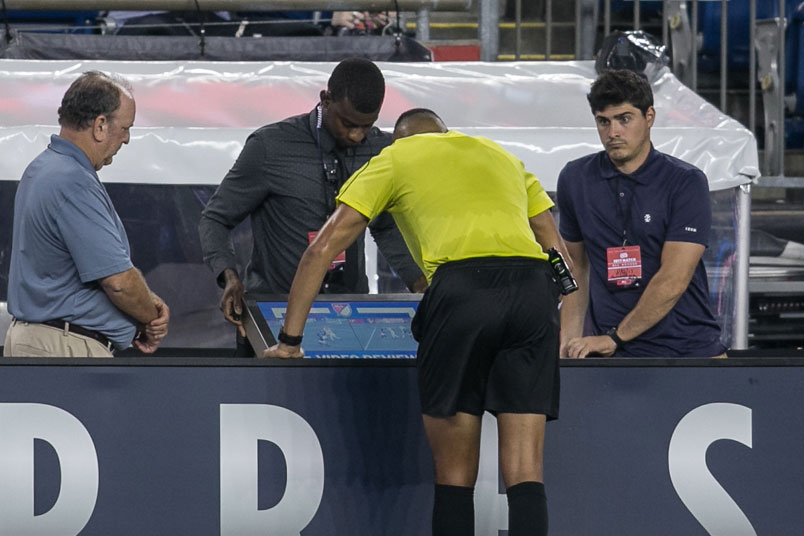 By Clemente Lisi – WASHINGTON DC (Oct 23, 2017) US Soccer Players – From DC United’s last game at RFK stadium to NYCFC playing another home game away from home, MLS’s Decision Day had its moments. The end of the regular season also means that the postseason is upon us and the games will become even more meaningful in the coming weeks. That’s where VAR comes in.

The point of using instant replay is to limit bad calls. It was even supposed to make referees better. While it has gone a long way in shedding light on dubious calls, it is far from perfect. Ask anyone who watches MLS, or the Bundesliga and Serie A this season, and you will hear a resounding moan of disapproval. Even optimists have given it mixed reviews.

How could a system meant to bring perfection to the game be so flawed? Better still, why is it already so universally disliked? Soccer is a complicated game. Unlike the NFL or other traditional American sports with a long history of technology, soccer is relatively low tech when it comes to officiating. Linesmen were an addition to the game.

The use of VAR – Video Assistant Referee – was first introduced by the league in August midway through the season. The German and Italian leagues followed suit this past summer. The outcome? Controversy. It was the very thing that FIFA, league officials and referees around the globe were looking to avoid.

The grumblings began during this past summer’s Confederations Cup. The series of blunders made it clear that VAR was no panacea. After all, officials man the monitores watching the replays of missed calls and then determining what course of action to take on the field. A person is still making the call. Sometimes whether a player intentionally tripped another in the penalty box or whether they were playing the ball is subject to interpretation. Unlike goal line technology, where a computer alerts the referee whether the ball crossed the line for a score, VAR involves humans. Anything involving humans is automatically prone to error.

Before the semifinals of the Confederations Cup, the tournament’s group stage saw VAR used five times (all on goal situations), something that prompted FIFA President Gianni Infantino to issue a statement of support.

“I am extremely happy with VAR so far. We have seen how video assistance has helped referees to make the correct decision,” he said at the time. “This is what VAR is all about … What fans have been waiting for over so many years is finally happening. This is a milestone tournament.”

Despite that support from the top, there were glaring errors at that tournament. In the Confederations Cup final, for example, Serbian referee Milorad Mazic made a bad call. ESPN writer Mark Ogden described it this way: “With one simple decision, Mazic inflicted huge damage to the credibility of FIFA’s video assistant referee system and left those watching in a state of bewilderment after he chose not to dismiss Chile’s Gonzalo Jara for an elbow to Germany forward Timo Werner…. And in that moment, he ensured that every use of VAR from this point on risks being compromised, because everyone will remember the night when a referee allowed a player to stay on the pitch after it was evident that he elbowed an opponent.”

This incident is exactly what FIFA wants to avoid. Love it or hate it, VAR has impacted the game. Matches no longer fit nicely into their two-hour TV timeslots and goal celebrations wait as referees consult the monitor. In Italy, for example, VAR has dominated the talk thus far this season in Serie A. Coaches rail against it at post-game news conferences and Sunday evening talk shows spent large chunks of time debating it. It hasnt received a warm reception.

How will this impact MLS? With the playoffs come more high-stakes contests. A controversial decision via VAR could very well determine which team advances and which one goes home early. Like pre-VAR days, a bad call will hurt someone. On Sunday, video review helped the referee red-card Clint Dempsey, a decision that will impact the playoffs. Dempsey will miss at least one game because of his flying elbow against the Colorado Rapids.

VAR seems to be most missed when there are games that don’t use it. Panama’s phantom goal versus Costa Rica that helped get it into the World Cup is a recent example. The biggest critic on VAR in MLS has been Atlanta United FC coach Gerardo “Tata” Martino. Twice this month Martino complained about the referees. The most-recent complaint came after his side lose 3-2 to Minnesota United, a match highlighted by a series of controversial decisions. Martino told reporters he wants the league to abolish VAR because he said the match officials are avoiding making calls as a result.

“I would like to see them take the initiative and make the decision on the field,” he told the Atlanta Journal-Constitution.

What coaches, players, and fans want is a system that is minimally intrusive and helps reduce human error. What VAR has given us are longer games and, in some cases, bigger mistakes. There needs to be a happy medium. In many cases, VAR has worked. Goals are rightly called back.

We need to keep in mind is that this is still a new system. There will be growing pains. The people using VAR are just that people. They are prone to error just like the referees on the field. Sometimes even replays don’t help. Other times it’s the missed call not using VAR that has left teams and fans confused. Indeed, as the stakes get higher – say in an MLS Cup Final or even a World Cup – then FIFA and national associations around the world need to decide whether this really is the best system.