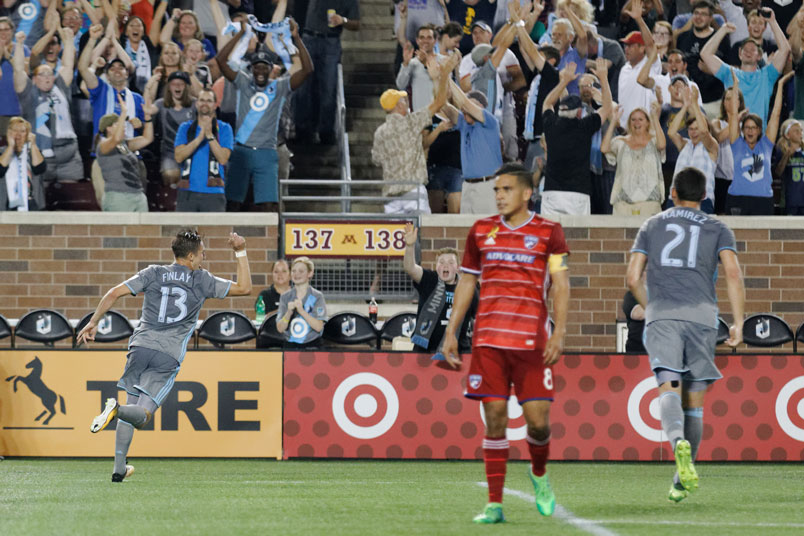 By Clemente Lisi – DALLAS TX (Oct 30, 2017) US Soccer Players – MLS teams are currently playing for a championship. Will Toronto FC replicate the success it achieved during the regular season? Can the Seattle Sounders repeat as champions? Will a surprise team, like the New York Red Bulls or Columbus Crew, emerge from the brackets? While the debate rages over which team can go all the way, another question in search of an answer is what led to the recent collapse of FC Dallas? What does it mean for the club’s future? In the bigger picture, what does it mean for the player developmental model?

One of the most-successful clubs in terms of victories over the last few years, FC Dallas leads MLS when it comes to developing players. It’s an effort supported by ownership and spearheaded by former USMNT player Fernando Clavijo. It’s contribution to this country’s youth system has been extraordinary. Midfielder Kellyn Acosta is the latest example of a player previously unknown to most who has become an integral part of the USMNT. It is a model for American soccer to follow. Having said that, how does this team pick up the pieces and be competitive in time for next year?

“Not qualifying for the World Cup is definitely a big low. For the club, not reaching the playoffs is another low,” Acosta said. “Sometimes you have to go through experiences like this to grow. For me to bounce back and forth with the club and to get that international taste has been beneficial for me.”

What Dallas endured in the second part of the season is the biggest meltdown by any team in MLS history. Winners of the Supporters’ Shield and US Cup double last year and second overall after the regular season in 2015, the team went from first place in the Western Conference at the end of July to below the red line. In a regular season where almost every team seems to make the postseason, FC Dallas missed out on the MLS Cup Playoffs. The team compiled a dismal 2-6-7 after the All-Star break with a mix of poor defending and lethargic attacking. It all led to Decision Day heartbreak when a late San Jose Earthquakes goal in its 3-2 win versus Minnesota United doomed Dallas despite its 5-1 pounding of Los Angeles Galaxy. Sound familiar?

“It’s been tough. It’s been a long season full of travel, lots of games. More games than I am used to, it’s just imperative for me to recover well,” said Acosta. “I mean, just all the little details come into play from eating well to sleeping well. Doing the necessary recovery needs, the ice baths, the massages… All of that comes into play. It’s been a long year for me especially, like I said going back and forth, to National Team to the All-Star Game to playing here (in Dallas) this season.”

FC Dallas’ collapse comes at an especially tough time for the American game after the US’s failure to reach the 2018 World Cup. At a time when finger-pointing has reached an all-time high and the search for culprits continues, it’s important for FC Dallas to continue working to develop talent while aiming to win a title. Without a competitive team, all of FC Dallas’ efforts will appear futile. American soccer’s hopes rest on a franchise like FC Dallas succeeding in the years to come.

That’s a lot of pressure to put on one franchise. It is the role of all MLS teams to develop talent and make American soccer better. No matter who wins MLS Cup this year, one would be able to point to a group of American players who helped make that happen. That’s how important MLS has become to the development of American players.

After all, Dallas is a key hub for American soccer. It is the future home of the National Soccer Hall of Fame at Toyota Stadium in Frisco, where FC Dallas’ soccer-specific stadium attracted an average crowd of 16,000 this past season. Dallas is also a founding MLS member that has seen its fan base steadily grow over the past two decades. The Cotton Bowl hosted games during the 1994 World Cup and the city was once home to the NASL’s Dallas Tornado, a team owned and bankrolled by Lamar Hunt. The city is also close enough to Mexico that it draws scouts from there looking to asses Mexican-American talent and sign players to its domestic clubs. Even the annual Dallas Cup has evolved into a tournament featuring the best youth teams from around the world. FC Dallas’ U-18 team won it this past year. For all these reasons, Dallas is an important stop on the growth of US soccer.

While the postmortem on FC Dallas continues, the question remains: How do you fix this team? It depends on who you ask. The biggest takeaway remains youth. The team’s focus on it has led to great success. This season, however, the team lost its way. Head coach Oscar Pareja abandoned that philosophy and brought in some veterans – primarily to help deal with a congested schedule that included the CONCACAF Champions League – who failed to live up to expectations. Injuries and international call ups for the Gold Cup and World Cup Qualifying didn’t help Pareja’s team as the season progressed.

“We have to sit down and evaluate. It’s a cycle that needs to be reviewed,” Pareja told reporters after the last game of the season. “There are things that need to change. The project is going to move forward. This year has been difficult. We’ll keep training. It’s early. They’re a group of professionals that need to get ready for what is coming. They’re a young group. Some of them will be getting called to their National Teams so we’ll put that together. To be honest, I didn’t plan on this.”

That last statement may be the truest of them all. No team plans on going down in the manner with which Dallas did. The key now is for this team to regroup and try to succeed in 2018. A new cycle needs to start. Not only are the fans in Dallas depending on it, but American soccer overall needs it to happen if it wants to achieve future success on the international level.