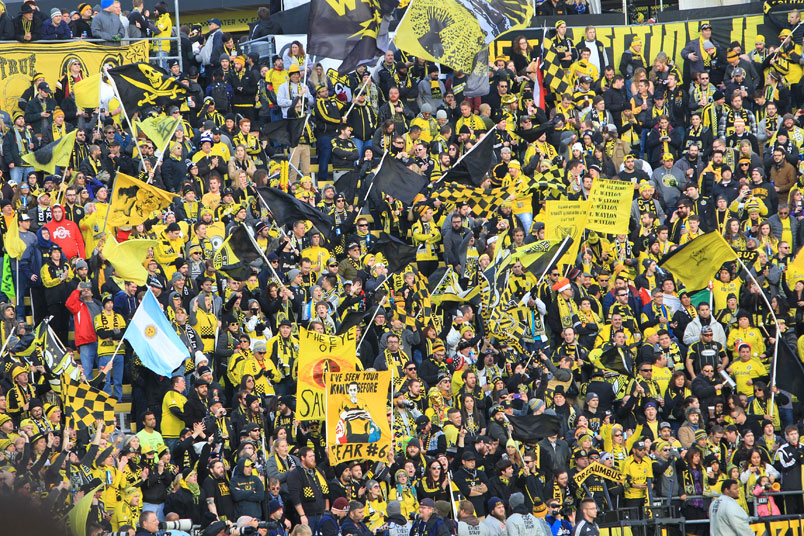 By J Hutcherson (Oct 17, 2017) US Soccer Players – MLS has spent a lot of time over its existence blurring the line between clubs and franchises. It’s an important distinction for soccer operation with international ambition, showing that a group of teams founded and allocated by a league and later added to through expansion is the same as a league of clubs. Further pushing that point were the MLS teams using “FC” in their names.

It doesn’t take much to figure out that MLS isn’t a league of clubs. They’re a top down single-entity assigning operating rights to investor/operators in member cities. The league owns 51% of every team.

That’s far from the romantic ideal of a soccer club. Even the expansion teams that existed prior to their MLS membership aren’t telling that idealized story. Those Pacific Northwest teams with NASL names are echoes of the originals that went out of business a long time ago. Orlando City was originally an Austin expansion team in the USL. That’s how it works in North American soccer.

What makes the Columbus Crew’s potential relocation to Austin such a big deal for MLS is that it scrapes away the veneer. It reminds fan across the league that MLS might let teams call themselves football or soccer clubs, but that means something different here. It means that teams can move.

Throughout the expansion era, existing teams moving hasn’t been an issue for MLS. It’s happened all of once. San Jose became the Houston Dynamo in 2006 and won back-to-back MLS Cups. Winning those championships helped MLS push the narrative away from other teams potentially moving. That’s in part because they’d already played through that scenario.

Around this time in 2001, there were strong rumors that the league was going to contract some teams. Contraction in pro sports was a thing back then, with Major League Baseball openly discussing cutting two teams. MLS was the only league that actually went ahead and did it.

Prior to announcing the end of the Florida teams, there were lots of rumors linking lots of MLS teams with a hasty demise. MLS didn’t do a great job deflecting those rumors, leading to the assumption that they were keeping options open. At the time, it was somewhat of a surprise that the Florida teams beat long-time trouble spots… well, you could’ve listed a few clubs.

MLS took a lesson from that when it came to relocation, closing off any discussion that other teams might be reconsidering their situation. It appears to be different now, even in the era of expansion.

“As attendance league-wide continues to grow on a record-setting pace, and markets across the country seek to join MLS, Columbus’ situation is particularly concerning,”” MLS commissioner Don Garber said as part of the Crew’s announcement of a potential move. “Despite PSV’s significant investments and improvements on and off the field, Columbus Crew SC is near the bottom of the League in all business metrics and the Club’s stadium is no longer competitive with other venues across MLS. The league is very reluctant to allow teams to relocate, but based on these factors, we support PSV’s efforts to explore options outside of Columbus, including Austin, provided they find a suitable stadium location.”

Consider this part of a commissioner’s job. Playing one city against another for a stadium is nothing new, even in MLS. DC United’s investor/operators flirted with Baltimore when that city was briefly enthusiastic about pro soccer. Stadiums open with a countdown clock on when it will no longer satisfy an owner or a league no matter how grandiose or forward thinking. It’s part of the game, with cities normally paying some or all of the cost at building something new.

Garber’s use of the phrase “very reluctant” also shouldn’t surprise. In an era of escalating expansion fees and new markets willing to pay them, the league doesn’t need to be competing against its existing teams. That’s the next big question. If an MLS team moves, what’s the relocation fee? How does the league allow that while not overly impacting its expansion business?

Again, what we’re seeing underlined here is North American pro soccer as a business and on those specific MLS terms. Single-entity still exists. The league is still in control of the ownership of every single club. There are no exceptions or special cases. Columbus may throw a spotlight on something the league has played down and at least in public eroded over multiple rounds of expansion. Whether that’s good, bad, or just different for MLS fans is the big picture question.