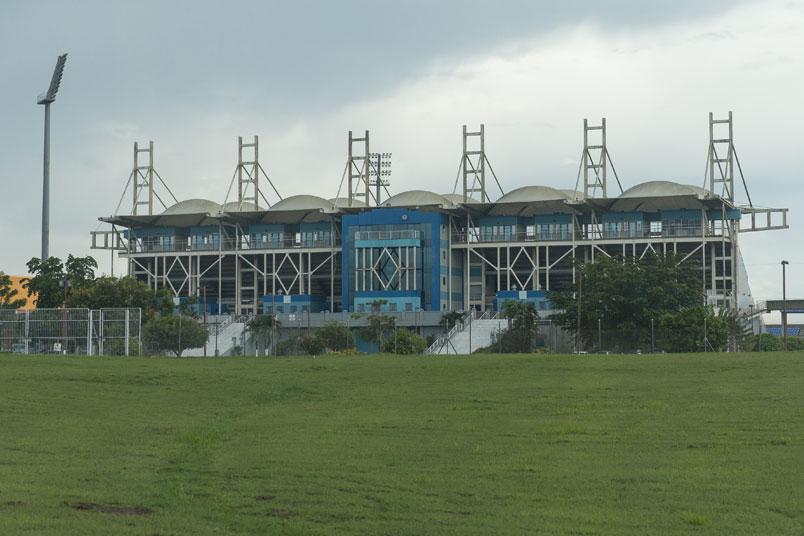 The USMNT plays Trinidad & Tobago at Ato Boldon Stadium (8pm ET – beIN Sport) in the final game of the Hexagonal round of CONCACAF World Cup qualifying. For the USMNT, the stakes are clear. 3rd-place and avoiding an intercontinental playoff against Australia.

We learned earlier on Tuesday that it will be Australia waiting on the CONCACAF 4th-place finisher. They knocked out Syria 2-1 on the night and 3-2 on aggregate in their series to represent AFC in the intercontinental playoff.

For the USMNT to avoid filling the CONCACAF side of that bracket, they need a point on the road. Get that point, and their sizeable goal difference should see them through to the World Cup. Get all three, and they advance without the need of a tiebreaker.

The flooded track at Ato Boldon Stadium took over the narrative on Monday, with the USMNT not getting a full field practice. What that means for Tuesday night is likely a wet field. The weather reports call for 80 degrees and a chance of rain at kickoff in Couva. That’s better than initially expected, but it still puts USMNT coach Bruce Arena in a position where he has no choice but to consider the playing surface. That might alter his roster late in the process.

For Trinidad & Tobago, their reason for playing this game in Couva at a track stadium with a listed capacity of 10k is because their qualifying campaign had already stalled. If they weren’t playing for a World Cup spot, the smaller venue meant less expense. Both sides have to deal with the playing surface, and that doesn’t necessarily help the home side. Holding a lead in Mexico on Friday, T&T unraveled under pressure.

The weight of the Panama game

Plenty of pundits pointed out that the USMNT vs Panama game wasn’t the best example of coherent soccer on either side of the ball. Panama’s plans disintegrated quickly and the USMNT could press a free flowing counterattack through the center of the field. That’s never a given at this level, with other teams capable of rebuilding their defense in real time. Panama is one of them, watching their quality defensive play over the course of the Hexagonal fall apart in Orlando.

For the USMNT, that win in Orlando showed an attacking edge that now turns into an expectation. It’s the old point about quality of play now underlined multiple times. The points matter most, but it’s unavoidable that how the USMNT gets them is a big part of the ongoing discussion.

Even that isn’t a given. CONCACAF’s push for four World Cup qualifying spots carried with it a desire to do away with the Hex. That seems a little off considering the high profile games the Hexagonal round produces. Still, CONCACAF was pushing for a split final round of qualifying that would’ve likely kept Mexico and the USMNT separated.

What qualifying will look like for 2022 isn’t a given. It’s a winter World Cup after all, with the Confederations Cup in question due to scheduling. CONCACAF will still have 3.5 slots, but how they distribute them doesn’t necessarily require the Hexagonal round. They could use their split final round format and play the 2nd-place finishers off against each other. The winner takes the automatic spot and the loser goes to the playoff. That scenario was on the table at one point. Will we get a final Hexagonal is a real question.