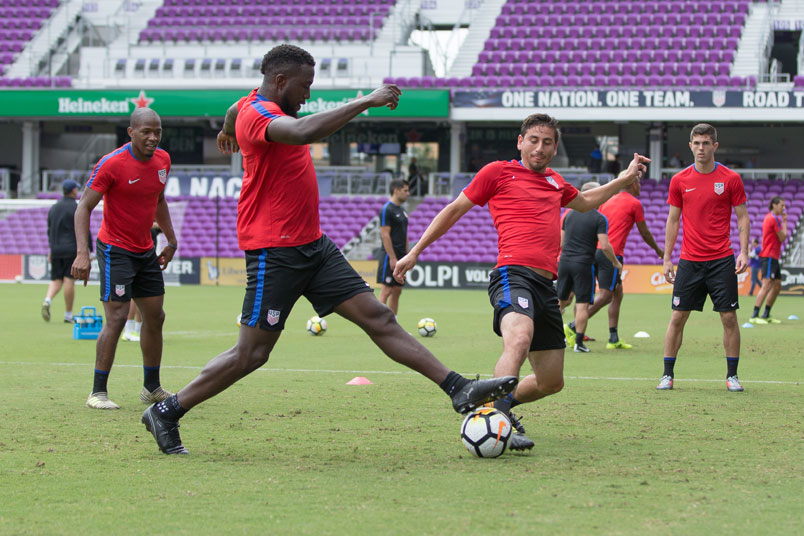 By Jason Davis – WASHINGTON DC (Oct 6, 2017) US Soccer Players – A day ahead of a World Cup qualifier against Panama (7pm ET – ESPN2) that could make or break his team’s chances of making next year’s tournament in Russia, USMNT coach Bruce Arena exuded the kind of casual confidence that has come to define his coaching style in a long and successful career.

Arena’s sarcastic wit can’t obscure the danger present for the team itself and the wider USMNT program. The USMNT hasn’t missed a World Cup since 1986, back in days when putting together a roster mostly meant picking the best college players on offer.

Facing Arena are several selection questions and a mandate to put his best players in a position to succeed against a Panama team with their own designs on qualifying for a World Cup.

Christian Pulisic’s significant talent is again a talking point. Despite his youth, the Pennsylvania native must be at the center of any game plan. There’s pressure to maximize his influence on the attacking end of this field, where his skillset is unique among the American side.

Arena spoke Thursday about his approach to the “problem” of Pulisic. Specifically, the USMNT boss rejected the idea that his lineup and tactical choices would center around the teenager. What that means for where Pulisic plays against Panama isn’t clear, but he’s a certainty to start.

Once on the field, the Americans will need to do more to protect the prodigy. Throughout the CONCACAF Hex qualifying round, teams have targeted Pulisic and attempted to throw him off of his game with a calculated program of physical play. Pulisic himself must learn to deal with the harassment, but it is also incumbent on his teammates to dish out their own brand of aggression.

Arena has a job here as well. Regularly mentioning the treatment of Pulisic sends a public message to CONCACAF and the match officials.

Arena may have designs on taking the game to Panama from kickoff, pressing an advantage in talent and location. The quicker the Americans can establish a lead, the sooner they can force Panama into playing a game they’re not fully comfortable with.

Panama’s approach will certainly be the same as the one Costa Rica used in their a 2-0 win in New Jersey last month. Possession won’t be much of a concern. The visitors will sit deep and invite pressure, defending with numbers to stymie whatever attacking moves the US can put together. From there, it’s a matter of springing an attack against a stretched side that has shown a propensity to leave gaps in the midfield.

All of this leads into questions over Arena’s approach in the center of the field. With captain Michael Bradley a guaranteed starter, will Arena provide him a partner equipped to help plug those gaps and keep Panama off the board?

Both the plan for Pulisic, and the counter to Panama’s approach turns on the formation Arena chooses. Bradley is unlikely to have a dedicated support player with him in the midfield if the decision is to line Pulisic up as a #10 ahead of Bradley, unless Arena opts to play a lone striker at the top of the formation.

There’s the possibility of Arena deploying a three-man back line. Despite the absence of John Brooks, Arena has options at center back and could go with a trio of Geoff Cameron, Omar Gonzalez, and Matt Besler. There are different ways to play with that formation. Defensively, intending to slow things down through the midfield. Or ultra-attacking, with the wingbacks and central midfielders pushed high up the field in support of an attacking group.

A better bet is something involving a traditional four-man back line. The fullbacks may run the flanks, but choosing a pair of center backs will set Bradley up as a shield, dropping deep to support them when needed.

The game figures to be physical and cagey. That doesn’t set up for a free-flowing US attack, no matter how much possession the Americans manage. The biggest danger on the defensive end lies in the counter. That’s something that’s already bit the USMNT more than once in this Hex.

Jozy Altidore was suspended against Honduras in the USMNT’s 1-1 draw in San Pedro Sula, forcing Arena to adapt. Jordan Morris started up top as a lone striker in a difficult game in a hostile environment. The Americans squeezed out a point when substitute forward Bobby Wood scored off a set piece rebound.

With Altidore back, Arena again has options at forward. Wood is healthy and available. Clint Dempsey remains one of the most skilled American attackers. Some combination of the three is certain to start, but it’s hard to know which player the US boss will lean on to lead the line.

Wood’s speed and energy won’t be as effective against a team sitting in. Altidore and Dempsey are more adept at the combination play it usually takes to beat a bunkering defense. It’s possible Arena could convince himself that Wood will trouble Panama’s defenders enough to soften them up for the likes of Altidore and Pulisic.