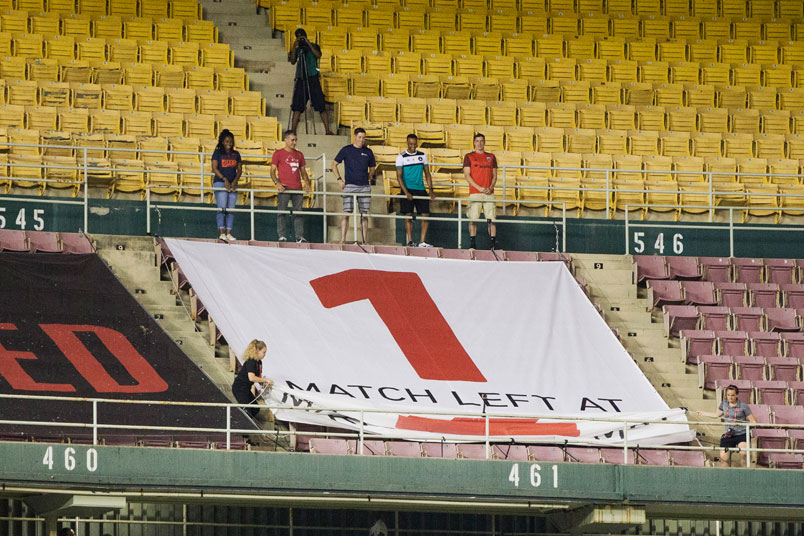 By Jason Davis – WASHINGTON DC (Oct 18, 2017) US Soccer Players – Robert F Kennedy Memorial Stadium opened on October 5, 1961 when it hosted a National Football League game between Washington and the New York Giants. Originally called “DC Stadium”, the city renamend it for Kennedy in 1968, a year after his death. In fact, the President of the United States, Robert’s brother John, was in attendance to see the hometown gridiron team fall to their rivals 24-21.

Designed as a dual-purpose venue, it would serve as home to both the NFL and the National League’s Washington Senators. The Senators played their first game there in the spring of 1962. The multi-purpose concept meant neither sport was a perfect fit in a venue with a decidedly cookie-cutter aesthetic.

Soccer didn’t arrive until later in the decade. The Washington Whips of the United Soccer Association launched in 1967, made up of the squad of Aberdeen FC of Scotland. The Whips joined the NASL when that league merged with the USA in 1968… then quickly folded. The Washington Darts moved into the NASL. Despite playing most of their games at Catholic University, they occasionally brought soccer back to RFK Stadium.

This being the wild and wooly world of pro soccer in America, the Darts left after the 1971 season for Miami. The Washington Diplomats followed, starting play in 1974 and lasting until 1980. A sort of “zombie” Dips, a relocated Detroit Express, played one more season in 1981 before folding. The Dips are most famous for being the one-time club of Johan Cruyff, a player who managed to capture the imagination of many young Washington area soccer players, despite the eventual collapse of the club and the league.

There was ill-fated Team America experiment in 1983. There was no regularly scheduled soccer at RFK Stadium until 13 years later when DC United launched as part of the newly created Major League Soccer. The MLS side shared the building with the Redskins for that single year of 1996, then for three years with the Washington Nationals when the baseball arrived in town in 2005. Two versions of the Washington Freedom women’s team played in the building.

Over the years a number of international games have taken place there, with the USMNT using RFK Stadium for seven World Cup qualifiers.

All of those teams, and it’s only United, here in 2017, that remains. RFK Stadium was never supposed to be a long term home for the club, especially not after the second decade of MLS dawned and soccer-specific venues began to pop up all over the country. United’s early success as the league’s dominant team should have carried them forward as a flagship for MLS and a standard bearer for American soccer. Instead, the downward pull of RFK Stadium and its financial weight doomed the club to mediocrity for most of the last ten years. All while the league’s collective star has risen to remarkable heights.

United will vacate RFK Stadium following the final game of the 2017 regular season on Sunday. Planned festivities include a game featuring some of the latter day soccer legends who grace the RFK Stadium field and a postgame ceremony with members of the Kennedy family. With no playoff soccer forthcoming in the nation’s capital, that should be the end for the game at RFK. The building’s owner, Events DC, will eventually demolish it ahead of plans for redevelopment of the site.

It admittedly takes a romantic view to see RFK Stadium as much more than a crumbling albatross around the neck of DC United. With only a cash-strapped soccer club as a tenant, upkeep of the building has been nonexistent in recent years. The concrete bowels of the stadium look like they’ve been used for target practice by the National Guard from the armory next door. Exposed wires and leaking pipes can make parts of the press box feel like a death trap. The austere setting, particularly when much of the building’s 50,000 seats are empty, saps the energy out of games.

United’s fans did a remarkable job keeping RFK Stadium vibrant despite those handicaps. Attendance has lagged because the team has been poor. However, a core group of faithful never stopped doing what they could to maximize RFK Stadium’s home field advantage.

The stadium’s legacy goes well beyond DC United or even soccer. Still, it will be soccer that first comes to mind for a whole generation who know the building as United’s home. The culture of the team built because of, but also in spite of, the stadium will undoubtedly change at Audi Field.

Progress marches on, unstoppable in its appetite. Progress will swallow RFK Stadium because United can’t survive in it and because no one else would willingly choose to take up residence there. That doesn’t mean that progress should prevent us from recognizing the good that came from RFK Stadium, or the unique place it has within in American soccer history.

It’s not just DC United soccer on the field at RFK Stadium that ends come Sunday. The carnival atmosphere of Lot 8, with it’s street meat, cheap beer, parking lot pickup games, and easy camaraderie comes to an end as well. It’s the legacy of the individuals who showed up from day one at RFK Stadium, way back in 1996, intent on transplanting the passion they knew from their South American roots to a new American team. Will there be a ceremony to honor them and their contributions?

DC United will be “better off” at Audi Field, as least as it applies to their business. As for everyone else? That’s a bit more complicated. It’s the same for those feelings about terrible, decrepit, ill-suited, unattractive, maybe a little dangerous, but all together wonderful RFK Stadium.