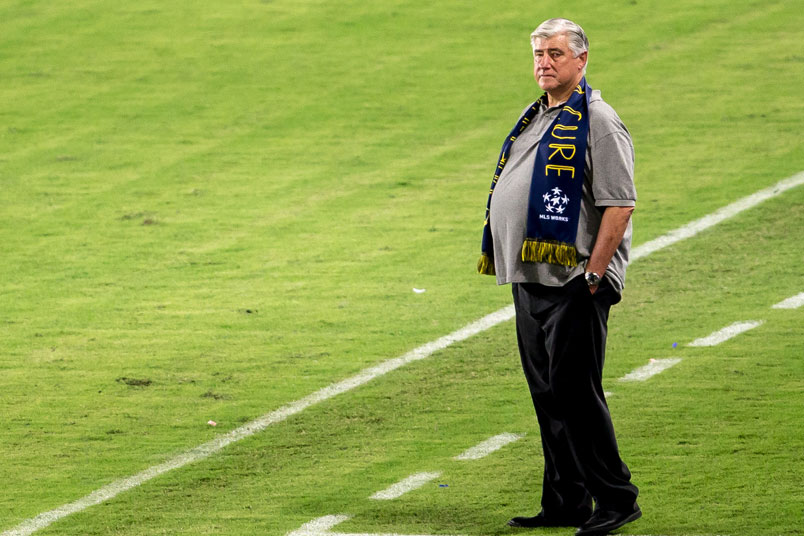 By Luis Bueno – RIVERSIDE, CA (Oct 25, 2017) US Soccer Players – If you were to take a wrecking ball and repeatedly slam it into the LA Galaxy’s facilities at StubHub Center, the destruction and forced rebuild would be a massive undertaking. Somehow, it would not be near the level of the rebuilding process which the club is now firmly in the midst of.

Failure to qualify for the postseason. Three home wins. Most goals allowed and fewest points accumulated in MLS. The 2017 lows were historic for the club.

The only way to go may be up but that all depends on the job the man tasked with the rebuilding project does. Galaxy coach Sigi Schmid took the General Manager title following the end to the 2017 season and now controls player personnel decisions.

Difficult enough on its own, several factors unique to LA complicate this rebuilding process. If Schmid can overcome those factors, then the Galaxy will be competitive from the start. Otherwise, 2018 may be a dismal repeat of the failures from this year.

Los Angeles is a city that begs for champions. The only way to stand out is to be competitive. Simply showing up and having a go is not enough. The NFL is learning that the hard way.

The LA Chargers failed to sell out their home opener at StubHub Center this season. They’re resorting to Chivas USA’s old techniques of covering unsold seats with tarps to make the empty seats less glaring. Up the 110 Freeway, the LA Rams are in the midst of seeing their attendance drop to fewer than 60,000 a game, a poor mark for an NFL franchise. The Rams are starting to win, though, and it will be interesting to see how their winning ways will affect attendance.

The Dodgers are in the hunt for their first World Series title since the 1980s and the city is responding. Since their meteoric rise this season, the Dodgers can do no wrong in this city, even when losing 11 consecutive games toward the end of the season.

The once-mighty Lakers have fallen into the abyss of the NBA. While the Lakers are still beloved in Los Angeles, the demand for a return to glory is there, particularly with the Clippers the more successful of the two franchises in recent years.

The Galaxy need to win to try and stay relevant and keep its attendance figures from dipping to Chivas USA levels, a slide which has already started. In three of its last five home games, the Galaxy drew less than 20,000 fans.

Galaxy fans were not fooled this season. The bottom fell out along with any hope and the fans responded by staying away. The Galaxy must rebuild the roster and come and win some games early in 2018 in order to regain the fans’ trust.

Galaxy supporters have not experienced these kinds of lows. A year ago, the team had an off year. At the time, the club did not seem very dangerous or much like a contender, at least not the way the team was for most of the decade prior. The Galaxy whimpered out of the postseason with a penalty-kick shootout loss to Colorado in the Western Conference semifinals after a 1-1 aggregate series tie.

Yet, last season was remarkable compared to this year. The Galaxy went from a 12-6-16 record to 8-18-8 and had nearly matched its entire loss totals just seven games into the season.

The Galaxy did suffer through a terrible spell once before, failing to reach the playoffs from 2006 through 2008. Like Schmid did this season, Arena took over toward the end of the 2008 season and finished up that year before taking his own wrecking ball to the club and starting from scratch in 2009.

Perhaps that alone should give the Galaxy faithful hope. Arena led the Galaxy to MLS Cup 2009 and catapulted the club into its most successful era, winning three MLS Cups from 2010-2014. So successful was Arena’s spell that a six-loss season was a setback.

This year’s dry spell though is perhaps more pronounced than it was a decade ago. The Galaxy had David Beckham and Landon Donovan in the middle of the previous decade and thus had hope that the team could build something around that dynamic duo. This year’s team features three designated players – brothers Giovani and Jonathan Dos Santos and Romain Alessandrini – but the trio is not at the same level as the previous two building blocks were.

But the biggest reason Schmid must rebuild quickly is the impending arrival of LAFC. The league’s newest expansion side has done everything right thus far. Now with the regular season over the club is closer to filling its roster and starting to look ahead to its inaugural season in earnest.

If the Galaxy starts off with five losses in its first seven games the way it did this season and LAFC is even slightly better, neutral LA fans will shift their attention toward the Banc of California and away from StubHub Center.

There could be nothing worse for the Galaxy to lose soccer-specific ground in Los Angeles. The bizarre world that became the Galaxy’s existence in 2017 would only continue to spiral out of control if that were to happen.

Schmid has had success in LA before as he led the Galaxy to their first-ever MLS Cup title win in 2002. Whether or not he can recapture previous glories in what is a much-different league than it was back then remains the question.

His task then is the same as his task now – build a team that will compete from the start. There is no other option. Failure could see the Galaxy dwindle in relevance both in MLS as well as in the growing sports market that is Los Angeles.