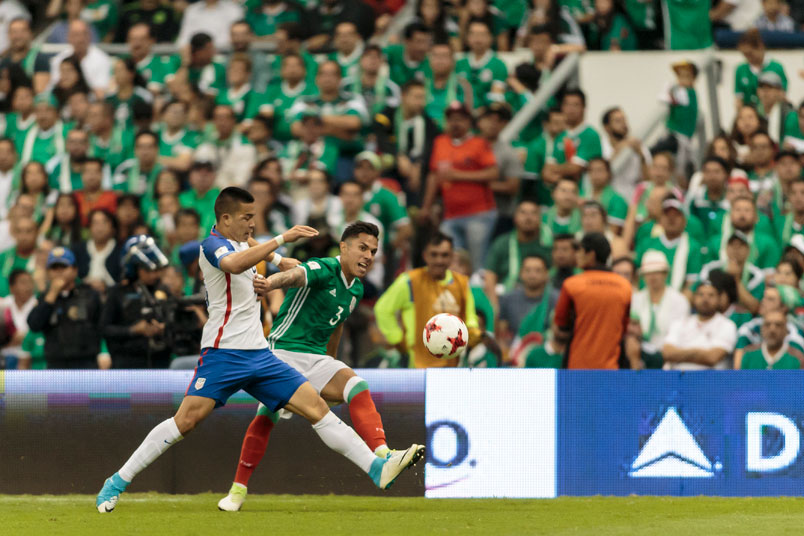 By Luis Bueno – RIVERSIDE, CA (Oct 4, 2017) US Soccer Players – The CONCACAF Hexagonal will culminate over the next week. Come Tuesday evening, three national teams will be making plans for Russian accommodations. Another team will eye Asia for their own passage. Two will be left wondering what could have been.

Intensity and passion will take over the region over that span. Anticipation and nervousness too, Hope for some, despair for others.

It is odd that Mexico will have almost none of those emotions. For a change, El Tri is atop the Hexagonal table, sitting comfortably on 18 points and trying to simply fine-tune a side that has been nearly spotless in CONCACAF. The path has not been perfect, but it is one that any of the five other teams would take over their own campaigns in an instant.

Still, there is one small task to that Mexico must take care of. El Tri must see the job through. Mexico is obligated to itself and to CONCACAF to field a lineup that will compete and fight for all six points at stake regardless of how it will or will not help the team quality to the World Cup.

Mexico can make CONCACAF history by winning both of their games. Their finale against Honduras can have a direct effect on who makes it to Russia, who goes through to the playoff, and who will have nothing to do next summer.

Mexico itself has benefited from other teams finishing the job in previous editions. Had it not been for a late goal by the USMNT’s Graham Zusi in the United States match at Panama, Mexico would have been eliminated from World Cup contention in the Hexagonal. Instead, Zusi tied the match and Aron Johannsson won it for the already-qualified Americans as the two stoppage-time goals gave the USMNT a 3-2 win. Panama finished with eight points while Mexico had 11 after falling disgracefully by 2-1 in Costa Rica. In the 90th minute, though, Panama held onto 11 points, enough for 4th-place and a playoff against New Zealand.

Similarly, Mexico can hold such power on Tuesday in San Pedro Sula. Through eight matches, Mexico is the only team qualified while Costa Rica has clinched at least a playoff berth. Panama sits in third with 10 points while the USMNT and Honduras are even at nine. It is possible that Mexico will be in position to help the U.S. out. Should the US not beat Panama, the Americans may need a result down in Trinidad and a Honduras draw or loss to get through to at least the inter-confederation playoff.

Mexican players may have been grateful to have received help from Zusi and the Americans last time around but have no sense of obligation for repayment of that favor.

“In the end, Mexico will look to gain points and finish in first place, not so much to return the favor to someone but rather to leave the name of our country on top,” Mexico defender Oswaldo Alanis said in a press conference this week.

Mexico’s history has shown that the team does indeed pay attention to other results on the rare instances they’ve been safely through to the World Cup heading into the final games. In 2005, Guatemala needed a Mexico win in the 10th game to reach a playoff and take a massive step toward reaching their first-ever World Cup. Mexico had qualified in game number eight, played in September 2005. Guatemala beat up on Costa Rica to reach 11 points but Mexico rolled over and fell in Trinidad, losing 2-1 to the Soca Warriors. That result which ousted Guatemala and helped Trinidad reach their first-ever World Cup.

Guatemala and Mexico have traded such jabs at each other over the last few decades. Consider it fallout from Mexico’s overage player scandal that cost El Tri the chance to play in the 1990 World Cup, a scandal that Guatemala played a role in unmasking.

While it is easier to roll over against a rival than it is to guarantee a win, Mexico still has the obligation to gun for the latter. Two wins would help out both the USMNT and Panama immensely, provided those nations take care of their own business elsewhere. It would also make Mexico’s qualifying campaign the most successful in the confederation’s history. Costa Rica’s 23 points in the 2001 Hexagonal are the most compiled by any team. Mexico and the USMNT are close behind with 22 points from the 2005 campaigns.

Finishing with a great number of points is not necessarily meaningful beyond the qualifying stage, nor is it a good omen. Of those top-three finishes, only Mexico went on to advance to the Round of 16 but fell to Argentina by 2-1.

Still, it would say something about Mexico. With 24 points, Mexico could say, not just with conviction but with facts supporting it, that it has the best national team in CONCACAF. That brings confidence and could give Mexico an edge heading into 2018. Any little beneficial scrap will help next summer, be it a player on fine form, a favorable matchup against an opponent or a jolt of confidence from recent results.

These will be the last official matches Mexico will play until kicking things off next summer, so these games will provide more than just an exercise. Perhaps coach Juan Carlos Osorio will see something he likes or finds surprising that will stay on his mind when making World Cup decisions.

Finishing strong and playing to win is still an important obligation for Mexico. Whether the results benefit other nations, El Tri, or nobody at all, playing to win is always the objective and should remain that way in CONCACAF.