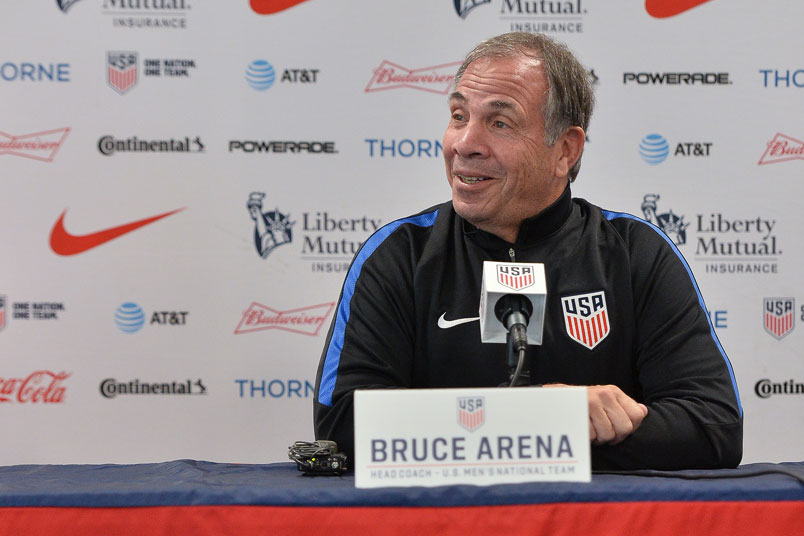 By Charles Boehm – ORLANDO, FL (Oct 5, 2017) US Soccer Players – Even in a palpable stressful situation, with the World Cup dreams of millions riding on his team’s next 90 minutes of play, Bruce Arena found a way to summon his trademark droll sarcasm.

“Good morning everyone,” he said to a jam-packed press conference room at Orlando City Stadium on Thursday, on the eve of the USMNT’s massive World Cup qualifier vs. Panama. “I guess I can sense from the gathering here, there might be some significance to this game tomorrow. So it’s good to have you here.”

If you were to use US qualifying cycles of the recent past as a guide, you might expect this game to be a celebration. By this stage the USMNT have generally clinched their World Cup spot, or reached the doorstep of doing so. Not so this time.

Thanks to several previous stumbles, Friday is effectively a “must-win” occasion. Especially if they wish to avoid the unwanted drama of 4th-place in the CONCACAF Hexagonal and an intercontinental playoff with Syria or Australia.

“Until your place is secured, there’s always pressure, right?” said Jozy Altidore on Thursday as the USMNT trained for the final time before the match. “There’s pressure for them, pressure for everybody. But it’s also part of being a pro, so it’s nothing new.”

The USMNT must walk a perilously fine line under the cloudy, tumultuous skies of Florida’s hurricane season. Urgency and aggression are crucial vs Panama, but so is balance, composure, and cohesion. Any lingering room for mistakes is long gone. What hangs in the balance is not just the legacy of this team and everyone on board, but the program’s long-term health.

“Games don’t get much bigger,” said captain Michael Bradley on Wednesday. “From the get-go in this Hex, we’ve been in a situation where our back has been up against the wall, and we’ve played in games where we need to win, we need points and there’s been a real sense of urgency. Obviously, you get to the end, and our margin for error is virtually gone. We understand what’s at stake. We’re excited by the opportunity to have it all on the line. As athletes, as competitors, the chance to represent your country, to play in the biggest games – there’s nothing better.”

It’s in moments like these that elite athletes show what makes them different from run-of-the-mill citizens. Much of the USMNT fan base revert to stress and doubt. They’ve had months to contemplate the disastrous consequences of another setback. For Arena and his squad, however, the fear intertwines with the thrill of competition and consequence – dreams come to life, in a literal sense.

“There’s always going to be pressure, because you always want to win and there’s going to be an expectation to win,” said DeAndre Yedlin, who says he’s fully match-fit and raring to go after missing the last batch of qualifiers with a hamstring injury. “But we need to go into the game not feeling too under pressure – we need to be relaxed and play our game and just do what we need to do and get three points.”

It’s a similar mood in Panama’s camp. Los Canaleros have the chance to take revenge on the nation that crushed their hopes of a first-ever World Cup with Graham Zusi’s dramatic display four years ago in Panama City. More significantly, this time they find themselves just as close to that elusive, historic breakthrough.

“Right now we feel good, knowing a tough challenge on Friday is just another step to get to the World Cup,” said Panama striker Abdiel Arroyo on Wednesday. “For a footballer, this is a dream to qualify to the World Cup for the first time. Hopefully Friday we walk away with everything. We know four years ago, we suffered that loss, but we want to make our nation proud, so our families and friends can know we gave everything for this moment to secure a spot in the World Cup.”

The USMNT could conceivably reach their goal with a draw on Friday and a win at Trinidad & Tobago on Tuesday, their final Hex match. No one is allowing for any possibility short of victory on home turf, though. It’s show time, and everyone wants to be on the right side of history.

“We understand what’s at stake,” said Christian Pulisic. “But we’ve been in similar positions before and we’re going to give it everything we’ve got.”

Added Arena: “This is why we play and coach in these type of games. This is what high-level athletes and coaches are supposed to be about. There’s going to be big moments and we need to have big performances, and I believe we’re prepared to do that.”