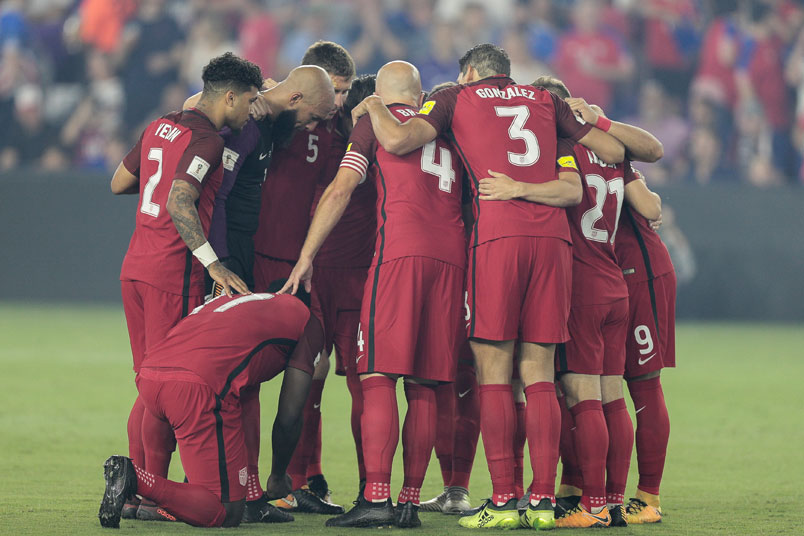 By Clemente Lisi – WASHINGTON, DC (Oct 9, 2017) US Soccer Players – Halloween may be just a few weeks away, but signs of the holiday are all around us. Pumpkins and skeletons adorn the outside of homes and stores have stocked the shelves with candy and costumes. Given this bewitching time of year, it seems fitting then that the USMNT has given a fright to everyone from soccer officials right on down to the fans. Whether the USMNT qualifies for Russia 2018 remains in the balance.

The United States, after a much-needed three points Friday in the form of a 4-0 rout of Panama, will need at least a draw against Trinidad & Tobago. The various scenarios favor the USMNT. A win or a draw are doable outcomes for a team attempting to complete the biggest turnaround since Linda Blair’s head in The Exorcist. The USMNT has struggled throughout World Cup qualifying. An 0-2 start, a change in coaches and losses at home to Mexico and Costa Rica were all factors. Like when the Americans reached the 1990 World Cup on the final day of qualifying, so too it will come down to the final 90 minutes. Then, like now, it means playing on the road at Trinidad & Tobago. It’s a treacherous place to play.

Monday morning didn’t ease any of those feelings. The USMNT discovered a flooded Ato Boldon Stadium and resorted to holding their practice session behind one of the goals. Whether or no the game goes ahead as scheduled is now a real concern.

The United States will look for history to repeat itself. That now-famous Paul Caligiuri goal and 1-0 victory remains cloaked in mystique. Rightly so, since that victory allowed the US to qualify for its first World Cup since 1950. That ended a drought that had plunged the national team into obscurity in this country. Hosting the tournament in 1994 and qualifying for every World Cup since has helped grow the game immensely, boosting popularity, participation, and player development.

“We changed the game forever in the United States,” Caligiuri told the Los Angeles Times in a recent interview. “In a positive way. We built this game.”

Failing to punch a ticket to Russia ‘18 could have catastrophic consequences for the National Team and the game in this country. Traditional soccer powers have failed to qualify for the World Cup in the past. It seems to be a trend in this current cycle, with Argentina and the Netherlands likely to miss out on this summer’s party. For the United States, history can be a good thing to channel when times get tough. Here are three lessons Christian Pulisic and his teammates can take from that magical 1989 squad.

Tune out the home crowd

Easier said than done, but something the Americans will need to do. Home-field advantage and other psychological factors are all key during the Hexagonal as teams try to secure points at home. Road games are always tough during qualifying. That’s something the Americans need to overcome. Unlike the current team, in 1989, T&T also had a shot at qualifying and the country’s 1.2 million residents at the time rallied around the team. That enthusiasm will be lacking on Tuesday night. Trinidad & Tobago has suffered from poor form as of late and will finish last in the Hex. They will be playing for pride.

A word on that stadium that has now become the focus. T&T’s Football Association decided over the summer the match will take place at the smaller Ato Boldon Stadium in Couva, instead of the familiar confines of Hasely Crawford Stadium in the capital Port of Spain. Built for the FIFA U-17 World Cup in 2001 and named after the world champion sprinter, the facility has a capacity of 10,000. That’s smaller than Hasely Crawford, which can seat 23,000. It also guarantees a sellout. Expect it to be loud. Back in ’89, the team looked past the crowd and remained focused. The same will need to happen again.

In 1989, John Harkes and Tab Ramos kept the midfield running. Both possessed great bursts of speed and the space they created allowed the US to generate offense. Ramos typically liked to hang back; Harkes was always willing to move forward and aid the attack. That combination of pressing up and helping the defense were one of the keys against T&T. Paul Caligiuri, the hero of that game, played as a holding midfielder. Nonetheless, his long-range effort led to the winning goal.

Bruce Arena’s midfield combination will be key. It will both reinforce the defense as well as aid the attack. It’s a safe bet that captain Michael Bradley will start as defensive midfielder. His experience at that position makes that a sure thing. His ball distribution and ability to read the game will be key. The midfielder Arena will tap to play with an eye towards supporting the front line is Darlington Nagbe. With Bradley shouldering a large chunk of the defensive duties versus Panama, Nagbe is free to help create chances. On the bench will be Benny Feilhaber, Kellyn Acosta, Dax McCarty, and Alejandro Bedoya. It’s a deep pool for Arena, but choosing the correct combination will have an enormous impact on how unstoppable Pulisic is and the outcome of the match.

The USMNT had not reached a World Cup finals in 40 years back in 1989. Since then, the USMNT is there every four years. That, coupled with the creation of MLS, has led to the game’s unprecedented growth in this country. Nonetheless, this team needs to keep in mind that missing out on next summer’s World Cup could set the game’s popularity back years.

That’s a heavy burden for any team to carry, but one the players must keep in mind. Soccer has made enormous strides in this country. Missing out on Russia ‘18 would go beyond what takes place on the field. Fans will be looking for treats. It would be a sweet ending to what has been a very difficult road.