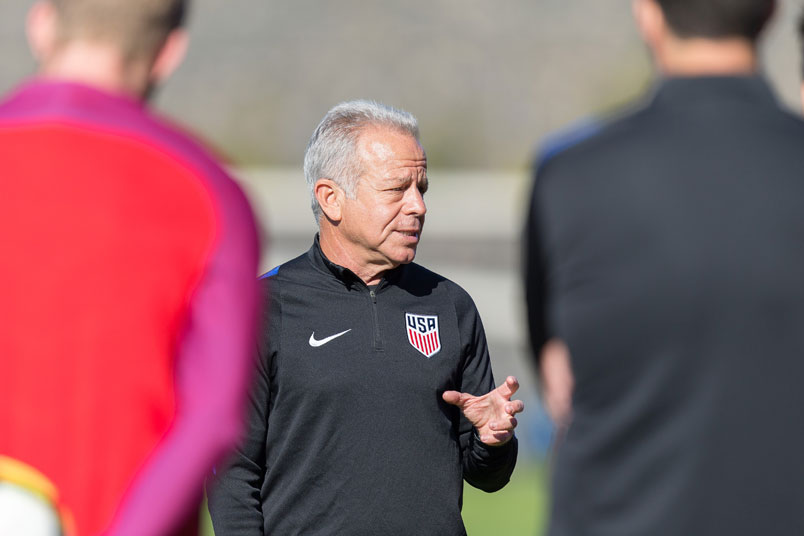 By Clemente Lisi – NEW YORK, NY (Nov 13, 2017) US Soccer Players – “Interim” is a tag no coach likes to have. It means the job is temporary. There is nothing about it that says you will get the job. That’s not a lot of motivation when trying to guide a team. That goes for either club or country.

That’s the situation for Dave Sarachan, tasked with guiding the USMNT for the remainder of the year. What that means is he’ll take charge for the last game in 2017, Tuesday’s friendly against Portugal. The consequences of failing to reach Russia 2018 continue to play itself out at all levels, and one of the biggest is the timeline for finding a new coach.

All this puts Sarachan in a familiar position over the program’s history. Interim coaches are nothing new for the USMNT. After Bob Gansler resigned in 1991 and before the Federation hired Bora Milutinovic, John Kowalski had the interim job. He coached the team for just three games, compiling a 2-0-1 record that included a 2-0 victory against Canada. Kowalski, a native of Poland who had coached primarily at the indoor level, helped rejuvenate a team that had grown lethargic offensively. There was talk at the time of removing the interim tag and sticking with Kowalksi, but US Soccer went with Milutinovic in the end.

Steve Sampson, an assistant under Milutinovic, eventually got the position full-time in 1995 after serving as the interim coach.

“People have said we picked Steve because of the results of U.S. Cup ’95 and the Copa America. Obviously, we were impressed with the results, but we were much more impressed by the way the results were obtained,” then-US Soccer President Alan Rothenberg told reporters in August 1995. “Steve really did epitomize the American style. He had an opportunity, he went for it and his players responded. Even in the games that we lost, we played a style that made me proud to watch and be a part of. The way he did it was probably more impressive than the results themselves.”

Then there was Bob Bradley, initially replacing Bruce Arena following the 2006 World Cup as the interim coach. US Soccer removed the interim label that December.

Sarachan has nearly 40 years of experience in coaching after playing in the NASL and MISL throughout the late 1970s and early ‘80s. While he was the head coach of the Chicago Fire from 2002 to 2007, Sarachan has primarily worked as an assistant. He spent most of his career working alongside Bruce Arena, both at DC United and the Los Angeles Galaxy. He was also Arena’s assistant at the 2002 World Cup with the US and during his most-recent stint as National Team coach.

“I would also tell you that there’s certain cycles that every national program goes through, good and bad,” Sarachan recently told reporters in Lisbon. “I think we hit a little bit of a bump, no question, but we still think the foundation of our pool of players is strong, and we will be better for this in big picture. In the short term it’s very difficult, but in the big picture I don’t think it’s a drastic or dire situation.”

In addition, Sarachan may also be the man in charge during the USMNT’s annual January camp. The US Soccer Federation presidential elections aren’t until February and coaching contracts normally come to an end following the World Cup. The expectation is that US Soccer will wait. Should US Soccer takes its time finding a new coach, Sarachan would be the person who will lay some of the groundwork regarding its future. After all, there are few American coaches who know the US player pool so well. Sarachan’s experience in both MLS and international level is invaluable. His ability to put that recent loss against Trinidad & Tobago behind him is all part of the rebuilding process.

“Being here, being in charge, is always a privilege. I’ve embraced it,” Sarachan said. “We’re professionals, we have a job to do. What makes this week so special for me personally is the fact that we’ve assembled a group of players that have a bright future, players that have shown up with no bitterness in their mouth, no chip on the shoulder.”

How long Sarachan lasts in the role, there is a lot he can contribute over the next few months as US Soccer embarks on a lengthy and thorough search. Tuesday’s friendly in Leiria is an opportunity for the USMNT to begin a new era on a positive note. Sarachan’s callups reflect that and the yearning to start over. Of the 21 players called into camp, five have no caps. They include striker Josh Sargent, midfielders Tyler Adams and Weston McKennie, defender Cameron Carter-Vickers, and goalkeeper Jesse Gonzalez.

The United States will play to win. Portugal, who is World Cup-bound and reigning European champion, will be missing several key players, including Cristiano Ronaldo. Nonetheless, this match will be a test for this young US squad. The player getting the most interest is 17-year-old Sargent, who played at both the Under-17 and Under-20 World Cups. Sargent would not be in this position had the US qualified for this summer’s tournament.

There’s no place to go but up for the USMNT. It’s a blank canvas. There’s no better caretaker than Sarachan. This is a coach US Soccer is lucky to have at the helm, albeit temporarily.