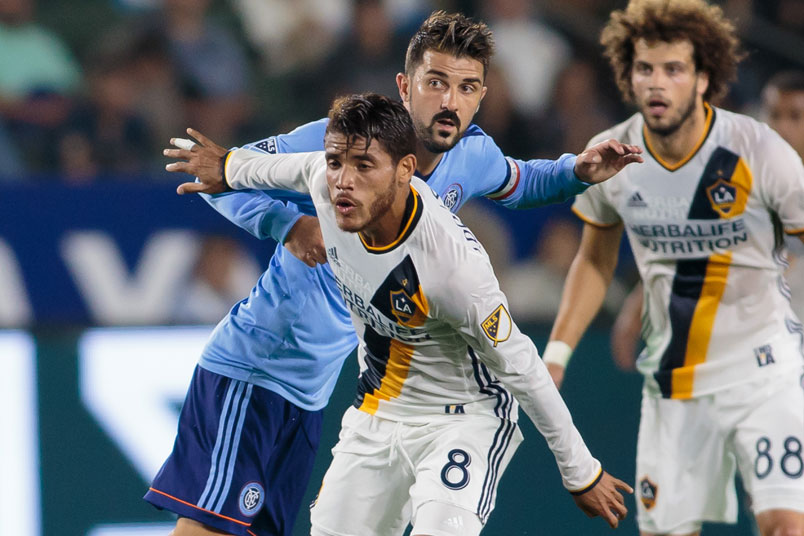 By Luis Bueno – RIVERSIDE, CA (Nov 15, 2017) US Soccer Players – The LA Galaxy’s disastrous 2017 MLS campaign left much destruction in its wake. Coaches and executives lost their jobs or faced demotions. The club showed players the exit. New faces both on and off the field came and will undoubtedly arrive to help right the wrongs in 2018.

One unexpected side effect is catching the attention of observers down south.

The Galaxy’s horrid season has ramifications on the Mexico National Team. World Cup hopefuls Giovani and Jonathan Dos Santos will not play a meaningful match until March, just three months before the start of the World Cup. To counter that inactivity, Mexican outlets have circulated rumors about the Dos Santos brothers reportedly joining a Liga MX side in the offseason to help the pair maintain their fitness at the highest level possible.

Whether the rumor has teeth or not, the Galaxy has a long history with offseason loans, including loans in years leading up to a World Cup. But the Galaxy should take a stand and focus on its own situation, which is to improve. The Galaxy need to turn down whatever loan offers may come for the Dos Santos brothers’ services. No short-term Liga MX deals. No moves to any club outside MLS, whether on loan or permanent.

The Galaxy needs to put the Galaxy first this offseason. The foundation for a rebuilding process is in place. Sigi Schmid took the coaching job in July after Curt Onalfo’s sudden firing. His son Kurt Schmid joined the club from the Seattle Sounders and will serve as the club’s director of player personnel and scouting. Kurt Schmid brings with him an impressive track record. Once the MLS Cup playoffs are complete, the roster will begin to undergo official changes as the roster retool will commence.

The focus next year needs to be on regaining credibility, challenging for a playoff spot, and competing against LAFC. The focus does not need to be on making sure the Dos Santos boys are fresh for the World Cup.

Now, there is a legitimate cause for concern when it comes to the Dos Santos brothers’ predicament. They played their last league match on October 22 in an ugly and befitting-of-2017 5-1 loss at FC Dallas. The next meaningful match the Galaxy will play likely will be in March. The club is certain to play friendlies in February to prepare for the season. Games that matter will not happen likely until March.

That would be more than four months in-between meaningful club games. Mexico played two friendlies after October 22 and is likely to play anywhere from two to four more friendlies before the Galaxy’s season kicks off. Those Mexico friendlies are merely dress rehearsals as well. Had the Galaxy reached the deep stages of the MLS Cup playoffs, perhaps it would not be as big of an issue. MLS Cup will be on December 9, which would have been a much better finish for El Tri’s concerns than late October.

Not only do the players need to be match fit but they need to feel the drive of competition. That comes from battling for points that matter in the table. They will not get that for more than four months. With World Cup-bound teams likely gathering in mid-May, the brothers would get possibly 10 weeks of regular club action to get up to speed before setting off for the World Cup, provided the pair is on the final roster.

All of that said, allowing two of the team’s prized assets to compete elsewhere would open a door that should remain closed. Loan deals between top Galaxy players and foreign clubs is nothing new. Landon Donovan and David Beckham spent several offseasons playing in Europe instead of resting and starting the preseason off with the club. Some of them were successful – Donovan did well in the English Premier League in 2010. Others not so much, as was the case when Beckham tore his tendon while playing with AC Milan that same year.

Even in the league’s early days, the Galaxy was a trendsetter. Carlos Hermosillo and Luis Hernandez shuttled back and forth between the Mexican league and MLS.

Reports link the Dos Santos brothers with a move to Monterrey, the city of their birth, as the two could suit up for either Tigres or Monterrey. A potential deal could be for January and February only, similar to Donovan’s, which would allow for a return to the Galaxy ahead of the MLS season. It is possible that either Liga MX club would push for a season-long loan which would mean a return stateside sometime after the World Cup, in which case a permanent transfer would make more sense.

Regardless of the terms, the Galaxy does not needs two of its top players playing elsewhere in January and February. When training camp opens, Giovani and Jonathan need to be at the forefront to help set the tone for success. When new players step into the locker room for the first time, the team’s leaders need to be present, and that includes the Dos Santos brothers. The Galaxy is compensating the brothers well for such services.

Some previous loans worked only because the Galaxy already had a strong foundation. Donovan had toiled for years trying to help the Galaxy regain its form when he set off on his EPL adventure. The Beckham loans didn’t work because they brought into question his desire to play for the Galaxy. It took several years for Beckham and the Galaxy to find that balance.

LA would benefit from loaning the Dos Santos brothers out, but that would be strictly a financial gain. Finances are important but what is more important is getting back to respectability. That starts with victories. That will only happen consistently in 2018 with a strong preseason.

The Galaxy has many things in its past to be proud of – MLS Cup titles, US Open Cup championships, statistical records – but the legacy of short-term loans is one that should remain buried in the past.