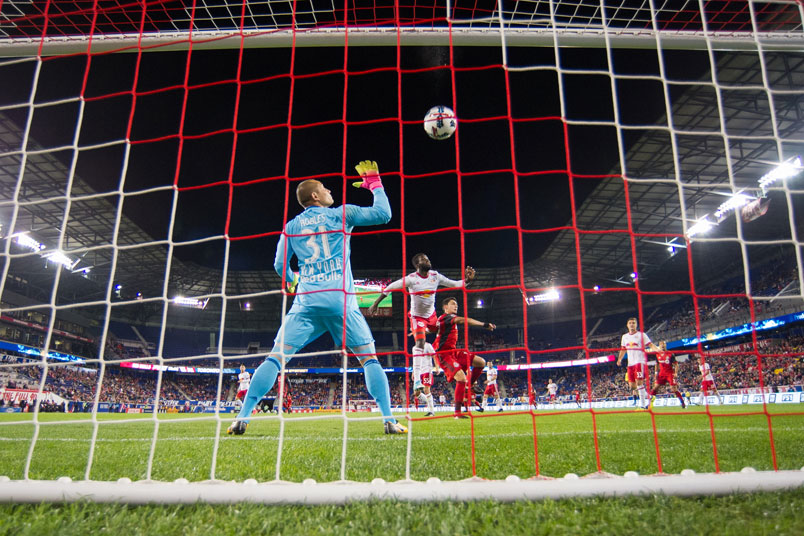 By Jeff Rueter – SAINT PAUL, MN (Nov 2, 2017) US Soccer Players – There are very few things that can both Major League Soccer pundits and fans alike can agree upon. From new signings to the merits of the Supporters Shield to a desire for promotion and relegation, everyone seems to have a stark difference of opinions.

However, the 2017 MLS Cup Playoffs have finally provided all who’ve watched with some common ground. This season, the East is far more entertaining than the West.

Since Columbus lifted the Lamar Hunt Trophy in 2008, only one Eastern side has won MLS Cup. Even that has a caveat. Sporting Kansas City realigned to the West just twelve months later. Between a dynastic Los Angeles Galaxy side, Jason Kreis’ sturdy Real Salt Lake, and the rise of Cascadia, it just seemed that the East couldn’t catch a break.

Through the first eight games of this postseason, the East’s games were good for a dozen goals. Even the 0-0 draw was quality. The West, meanwhile, has sagged to the tune of just 6 goals in four games. Five of those came from Vancouver’s rout of the sixth-seed San Jose Earthquakes.

How did this seismic shift happen so quickly? These four events begin to tell the story.

In 2016, the Galaxy was a penalty kick shootout away from the conference finals, with Tim Howard helping shut the door on Los Angeles’ season. Soon after, Bruce Arena left for the USMNT, and a massive offseason overhaul ensued.

In Arena’s stead came Curt Onalfo, in hopes that the long-time assistant could continue the style of play that had helped LA place third in the conference. Instead, Onalfo was out of the job by July. Captain and vocal leader Jelle van Damme became disgruntled and requested a move midseason.

While coach Sigi Schmid and midfielder Jonathan Dos Santos joined the cause that same month, it was too little, too late. The Galaxy finished with their worst record in club history, missing the postseason for the first time since 2008. This left plenty of points for other teams to pick up, and one of their departures played a key role in another team’s successes.

A tale of two expansions

Overall, it’s a fool’s errand to try and make a hard-and-fast comparison between two expansion sides. Each ownership group chooses how to build, providing their version of how they see success in this league.

This couldn’t be more apparent than the 2017 debuts of Atlanta United and Minnesota United. The Loons modeled themselves after sides like the Portland Timbers and post-rebrand Sporting KC. Grow a fan base and a strong core on the field before spending lavish sums on a marquee player. Meanwhile, Atlanta wanted to finish what NYCFC had tried to accomplish in 2015. Become that rare expansion side to make the postseason in year one.

Minnesota had a successful year by expansion standards, finishing around where NYCFC and Orlando City did in the overall table in their first season. Atlanta coach Gerard “Tata” Martino tried something different entirely, balancing flashy young talent with league veterans like Larentowicz. As a result, the West added a steady competitor, but it was far from the incredible accomplishments of Atlanta.

While the Chicago Fire wasn’t an expansion side, their overhaul was very nearly a case of building from the ground up. Over the 2016 calendar year, they jettisoned many key pieces, including Sean Johnson, Harry Shipp, and Joevin Jones. Early returns weren’t promising, with the Fire finishing last in MLS in 2016.

Two offseason moves signaled that Veljko Paunovic, Nelson Rodriguez, and company were onto something. Chicago’s DP signing of Nemanja Nikolic provided them the goal scoring threat that Kenedy Igboananike and Gilberto never proved to be. That said, getting Dax McCarty from the Red Bulls may have been the acquisition of the window. Suddenly, the Fire had a locker room leader who knew what it took to win big games.

From a macro level, this also kept one of the league’s most fiery competitors in the East. McCarty’s exit signaled an increased role for Tyler Adams, one of the brightest young stars in the league today. The Red Bulls still made the postseason, but this shift bolstered a second side in the conference.

If McCarty’s allocation money-laden trade was a game changer, Dom Dwyer’s move from Sporting KC to Orlando may have reinvented league acquisitions entirely. At the time of the deal, SKC sat in second in the West, with a stout defense largely to thank. Still, their attack had been a week link all season, with Dwyer sitting on just 5 goals.

Trading their best striker seemed questionable at the time. In the end, it may have derailed one of the West’s strongest title contenders. Sporting slumped down the stretch, finishing fifth in the conference before exiting in the first round with a whimper. Despite acquiring $900,000 of allocation money up-front, KC failed to sign a contingency plan for their lost goal scoring threat. Orlando didn’t make the postseason at all, but a move for the future caused SKC to mortgage the present.

There are still nine games left this postseason. While it looks like the winner of a potential Toronto-Columbus series would be the strong favorite to win the title, anything can happen in the playoffs. A single-side expansion will leave the conferences imbalanced again, with LAFC attempting to replicate Atlanta’s success. All told, the past couple weeks have been a wakeup call for most teams out West. The conference’s days of dominance are over.