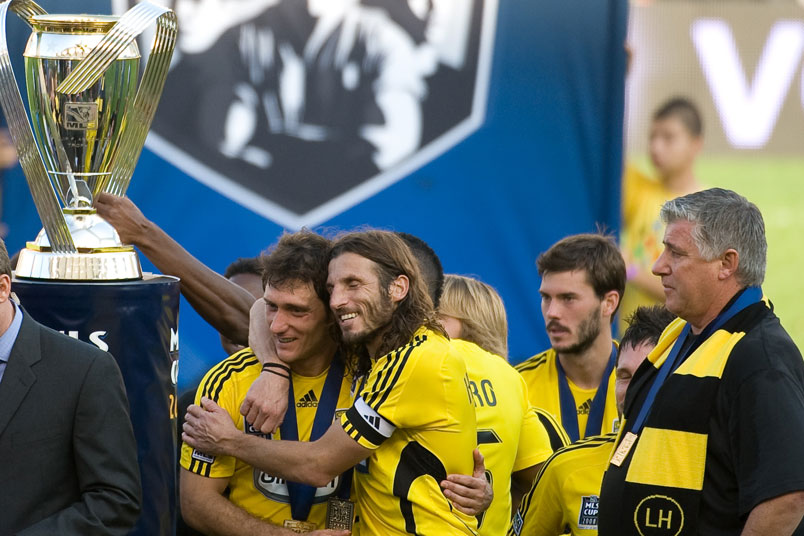 By Luis Bueno – RIVERSIDE, CA (Nov 1, 2017) US Soccer Players – The MLS Cup Playoffs are in full swing this week as each of the conference semifinal series have completed their first legs. The round before produced some dramatic moments while the coming days promise to have some riveting action as teams try and extend or salvage their respective seasons.

The LA Galaxy isn’t involved. Finishing with the worst record in MLS does not earn a team a playoff spot. Yet, it was not that long ago that the Galaxy were not only entrenched in the MLS Cup playoffs but very much dictated its terms.

It will take time and patience to get back to this spot, but the Galaxy has neither. Sigi Schmid, the recently-anointed general manager, has quite a bit of work to do. But as he delves into the inevitable roster turnover, he may come to a dire conclusion.

This Galaxy team is a mess. Only a long-term project will help the Galaxy emerge from these depths.

Like Schmid did in 2017, Bruce Arena came in late in the 2008 season facing a massive rebuilding effort at season’s end.

The statistics and similarities reveal only a portion of why that job is tougher now than it was in 2008. That team had building blocks in Landon Donovan and David Beckham. Not only were they talented, but the duo had the right experience and leadership qualities to help take a team from last place to playoff contender.

The Galaxy have some pieces now. This roster is not entirely devoid of talent. The Dos Santos brothers and Romain Alessandrini would get time anywhere in MLS. Younger players like Daniel Steres, Dave Romney, and Emanuel Boateng also help things while veteran Ashley Cole had a fine season.

The composition of the roster though is all wrong for a quick rebuilding process. The Dos Santos brothers and Alessandrini all take up Designated Player slots, so barring an unforeseen move of one or more of those players from the roster, the Galaxy will not be able to buy a high-priced impact player.

The previous rebuilding process did not culminate in a championship until the Galaxy brought in Robbie Keane in their third DP slot in 2011. That move that helped the Galaxy win three MLS Cups in a four-year span. Also, none of the current DP trio is the kind of leader the Galaxy had with Donovan and Beckham around.

Perhaps the one thing that stood out the most from Arena’s previous project was the significance of leadership and how important of a role that played in getting things right. Arena brought in veteran players like Eddie Lewis (who came in soon after Arena’s arrival in August 2008), Tony Sanneh, Jovan Kirovski, and Gregg Berhalter. All players had played for Arena with the USMNT. All brought experience and leadership to the club.

The Galaxy has a similar player around already in Cole. Jermaine Jones also fits into the veteran role. Whether he has the same leadership abilities as Cole or the previous veterans is an open question. Jones’s salary could rule him out of a return.

Now, Schmid has done well to build rosters. In Columbus, he helped construct a talented roster that won MLS Cup 2008. He helped build up Seattle from scratch a year later and had the team consistently battling for an MLS Cup berth. That came after his firing midway through the 2016 season.

While successor Brian Schmetzer gets much of the credit for guiding the Sounders to MLS Cup, the run would not have been possible without Schmid’s involvement. While he never played for Schmid at Seattle, Nicolas Lodeiro’s acquisition helped put Seattle over the top. Schmid played a key role in bringing Lodeiro to Seattle. Schmid’s previous relationship with Guillermo Barros Schelotto, who played under him at Columbus, was a key factor in helping Lodeiro choose Seattle and MLS as a destination.

Schmid has contacts throughout Latin America which could lead to the unearthing of a hidden gem or two. However, Lodeiro came in as a DP, and the Galaxy cannot bring in a player as a DP under the current setup.

The new GM can’t rely on imports alone. Schmid may want to bring in some of his former players from Seattle to help guide the Galaxy out of the depths of the Western Conference. He took Brad Evans directly with him from Columbus to Seattle and traded for Chad Marshall a few years later. Both were key players in Seattle’s MLS Cup run a year ago.

The Galaxy also possess the second pick in the 2018 MLS SuperDraft. While the draft may not be as significant now as it was a decade ago, the Galaxy did acquire Omar Gonzalez and AJ DeLaGarza via the draft in 2009, key pieces to the Galaxy’s rebuilding puzzle then.

The solid footing that existed in 2009 is not quite the same as it now. If this rebuild project is to yield quick results, Schmid has to hit on nearly all of his acquisitions and miss on few or none. If that doesn’t happen, the Galaxy could be long gone by the time the 2018 MLS Cup playoffs roll around, looking at yet another roster overhaul.