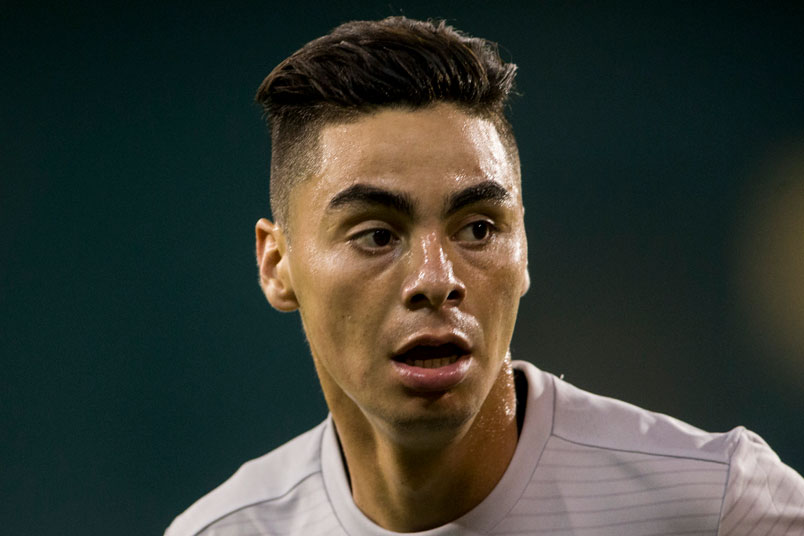 By Jeff Rueter – SAINT PAUL, MN (Nov 30, 2017) US Soccer Players – On Wednesday, MLS commissioner Don Garber spoke as part of the Sports Business Journal’s Dealmakers conference. He covered a wide range of topics. That included confirming a potential, SUM-organized tournament next summer for non-World Cup participants. He also touched briefly on Anthony Precourt’s initiative to move the Columbus Crew to Austin in 2019 along with quashing any hopes for promotion/relegation.

One of Garber’s statements stood out above the rest to me. Per Ian Thomas of Sports Business Journal, Garber said that MLS rejected two recent transfer offers. One around $5m for a New York Red Bulls player. Another bid for $15m for an Atlanta United star.

First, a bit of clarification. Most of us following along on Twitter assumed these deals were for Tyler Adams and Miguel Almiron, respectively. Soon, Jeff Carlisle of ESPN FC confirmed that New York Red Bulls had not received a transfer offer for the young American international. Later, Matt Reed of Pro Soccer Talk reported that an English Championship club had put the bid in for Jamaican left back Kemar Lawrence.

The cases of Lawrence and Almiron are incredibly different. “Taxi” (as he’s known) signed with New York from Harbour View in March, 2015. After impressing that preseason, Lawrence went onto make 23 appearances for the Red Bulls in his first season. The player comes with high praise. Leicester City captain Wes Morgan highlighting his ability to contain Xherdan Shaqiri in an international friendly against Switzerland. He scored the pivotal goal against Mexico to knock El Tri out of the 2017 CONCACAF Gold Cup.

Still, Lawrence has been a steady, not spectacular, cog for the Red Bulls. Left back continues to be the most scarce position across Major League Soccer, which raises Lawrence’s stock within the league. A $5m bid for a player in his prime who seems to have hit his ceiling is a phenomenal bit of business. To wit, Lawrence’s fee would have been the third-highest collected for a player from the league, behind only Jozy Altidore and Matt Miazga. The pair, both Red Bulls at the time, were 18 and 20 when they put pen to paper and moved abroad. At his age, there’s a real chance Lawrence’s value will never be higher.

Lawrence’s alleged $5m transfer fee doesn’t hold a candle to the offer made for Almiron. The Paraguayan international was Atlanta United’s second designated player, choosing the expansion side over a bid from Arsenal in part due to head coach Gerardo Martino. At 23, Almiron was a revelation, combining vision, pace, and ability on the ball to a level rarely seen in the league. He served as the focal point of Atlanta’s attack, helping the first-year team earn the fourth seed in the East.

It’s likely that Arsenal placed the bid for the midfielder, and I wouldn’t expect $15M to be their final offer. Numerous reports coming out of England claim the Gunners will be battling Inter Milan for Almiron this window. It makes sense. At 23, he’s become a key figure both for club and country, is undeniably athletic, and has refined his decision-making.

Almiron is the exact player MLS hopes to acquire as the league looks to close the chapter on its internationally perceived “retirement league” moniker. However, declining these transfers stalls the clock on the league’s most likely next incarnation: a selling league.

At the outset, the notion of a selling league seems to fly in the face of Garber and company’s wishes to become a “league of choice” for players across the world. However, at the very least, being a selling league affirms that young players want to be playing in MLS. It’s a place where young talent can get top-level minutes that would be hard to find in the Big Five leagues of Europe.

In fact, some of the most respected leagues in the world are known more for selling than retaining talent. The Dutch Eredivisie produces talent well beyond Ajax’s vaunted academy. Led by Anderlecht, the Belgian league has seen talented players like Vincent Kompany, and Youri Tielemans move on in high-profile deals. The leagues in Argentina, Brazil, and even Mexico have long been willing to sell top young talent in order to reinvest these funds in the club.

Almiron’s potential snub comes in the wake of an Argentine report that Atlanta has found their next young target: Ezequiel Barco. Turning 19 in March, Barco has established himself as a regular starter for Independiente. According to the report, Atlanta would be willing to more than double their record-setting fee paid for Almiron, sending $14M to the club for Barco’s services.

It’s easy to understand why he commands such a price tag. At such a young age, Barco has drawn international attention as one of the most promising young players in the game. The phrase “the next Messi” has even started to float around the midfielder. While this tends to be a kiss of death for most promising prospects, he’s seemed oblivious to the hoodoo.

It’ll be fascinating to see how Carlos Bocanegra, Martino, and company handled these two transfers. In theory, Atlanta could sell Almiron, buy Barco, make a multi-million dollar profit, and get younger in the process.

However, refusing to sell Almiron (and, indeed, Lawrence) may open a new can of worms. A failure to allow these players to move onto bigger and better leagues would suddenly set a dangerous precedence. Almiron, Hector Villalba, and others have all moved to MLS in hopes to raise their stocks for further success in bigger leagues. The single-entity structure complicates the process of letting these players move on. If young players begin to see the league as a non-seller, it may be fated as a dead end for similar players for quite some time.

The ensuing limbo (no longer a league for aging heroes, not able to be a stepping stone for the next batch of stars) would be a hurdle not easy to overcome. Whether it’s for these two players or others, it’s finally time to embrace selling league status.