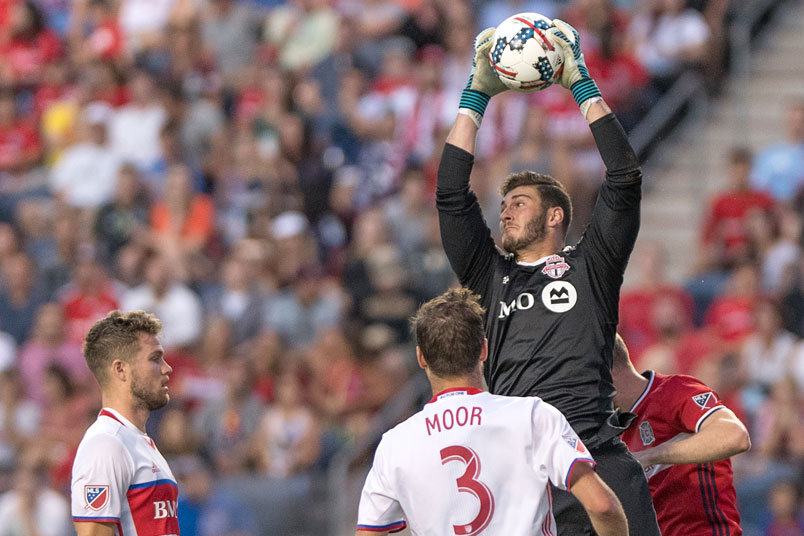 By Jason Davis – WASHINGTON DC (Nov 29, 2017) US Soccer Players – Toronto FC’s 2016 quest for the MLS Cup failed at the last hurdle. The Reds lost to the Seattle Sounders in a penalty shootout in their own stadium. If 2016 had looked like nothing more than a one-off season for the club, a lightning-in-a-bottle campaign of the kind that sometimes happens in MLS, fans in Toronto might have despaired. Instead, they mostly remained resolute, patiently waiting for 2017 and for their team to have another crack at the title.

Only the best teams earn themselves a second chance. Toronto FC has a chance to be the best team in MLS history.

The 90 minutes Toronto faces won’t be simple, even if they remain favorites. The Columbus Crew arrive at BMO Field disappointed with their goalless home leg performance, but capable of springing an upset on the road. In Ohio, the Crew made a push for a goal in the closing minutes. That’s when Toronto’s 23-year old goalkeeper Alex Bono made the difference

“You go for long stretches as a goalkeeper not making the save and not being involved, and then all of a sudden you’re called on to do a job to help your team get a result in a tough environment on the road. For me, it’s just doing my job,” Bono said.

Toronto’s approach to the second-leg will be very different than in the first. While that could mean a dominant showing and a victory, it could also open up space for the Crew to find their way to goal. Bono might not have to wait until the 86th minute to make that difference.

While figures like Michael Bradley, Jozy Altidore, Sebastian Giovinco, and Justin Morrow are aiming at another MLS Cup final appearance and redemption for last year’s loss, Bono is new to the starting lineup. The 23-year old made 15 starts in 2016 but was second choice come playoff time to Clint Irwin. In 2017, Bono ascended to number one, starting 28 games and tying for second in the League in shutouts with 10.

That mantle hasn’t proven too much for Bono to handle. Nor does the pressure that comes with trying to finish off one of the greatest team seasons in MLS history seem to bother him.

“Obviously it makes it a little more tough when that’s kind of the buzz—the buzz is the treble potential,” Bono confessed. “We’ve already taken care of the other two. All we’re focused on right now is this next 90 minutes to give ourselves a chance to play for that third one. The fact of the treble thing—we try to keep that out of sight, out of mind.”

That message of focus comes from the head coach, Greg Vanney. Vanney won MLS Coach of the Year on Monday, recognition for his role in Toronto’s historic season. From his vantage point, Bono believes his coach his is the best tactician in the League

“I’d be willing to bet that he is the best tactical mind in all of MLS. The way that he approaches games and the way he sets up the team… are second to none. I don’t think there’s a coach in MLS with a better soccer mind, who is better with making decisions on the spot, who analyzes a game quite like [Vanney] does.”

Vanney’s job for the second leg against Columbus is to set his team up to score goals while not losing the defensive stability that served them well in the first leg. The give-and-take of the tactics will be made easier by the return of Giovinco and Altidore to the lineup. Both players missed out on proceedings in Ohio due to suspension.

Bono can only watch his teammates in the quest for goals. He nevertheless sounded excited about a more forward approach with an MLS Cup berth on the line.

Should the goals not come, Toronto could find themselves in another do-or-die penalty shootout. Things didn’t go their way against the Sounders in last year’s championship match. If they fail in the test against Columbus, they won’t get their second chance to win the title.

Bono’s approach to the idea of a shootout is to address it when it comes. That may be confidence that his teammates can find the goals they need to win, or just a pragmatic approach to managing big game nerves.

Toronto FC is the favorite, playing at home in front of what will be a sellout crowd of 30,000. They have two of the best strikers in the league back in their lineup. Veteran leader Michael Bradley mans the midfield. The underappreciated passing of Victor Vazquez opens up space. A pair of elite MLS fullbacks in Justin Morrow and Steve Beitashour keep the defense solid. The system installed by Vanney that plays to their strengths.

Even with all of those assets, it could come down to Bono. In his first season as the first-choice goalkeeper for the best regular season team in the history of the league, he’s up to the challenge. If he meets it on Wednesday night at BMO Field, Toronto FC could get their second chance at history.