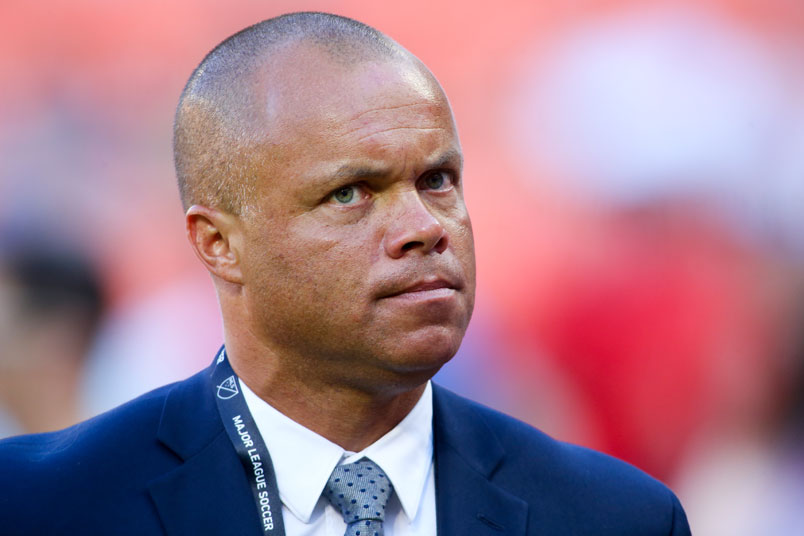 By Jason Davis – WASHINGTON DC (Nov 3, 2017) US Soccer Players – We’re in the midst of the 2017 MLS Cup playoffs. The best teams in the league battle it out for supremacy on fields from Cascadia to New York City. Meanwhile, a quieter, much less fun process is unfolding in all of the cities left out of the postseason party.

In places like Washington DC, Foxborough, and Chester, the painful march of a failed season has brought teams to the point of self-examination. That review means a full review of not just how and why they failed, but what steps they can take to improve their chances in 2018.

Complicating factors exist, to be certain. For the clubs in those three cities specifically, those factors include a difficult 2018 schedule, the search for a new coach, and a reckoning over spending and ambition. DC United, the New England Revolution, and the Philadelphia Union look to be far off the pace in a resurgent Eastern Conference. The job of breaking into the elite group of teams in the East might take more than those clubs have to give. That certainly won’t stop them from trying.

Let’s begin with DC United, a club that has spent the last few years in a holding pattern. The promise of a new stadium has meant operating as a lesser participant in a league rapidly growing in outlay and aspiration. If United is going to catch up to the new standard, they’ll need to invest in their roster on a scale they’ve been avoiding. The story was always that the lease at RFK Stadium was debilitating. A club-controlled stadium would provide the revenue necessary to jump into the MLS 2.0 era.

Will that happen? United’s offseason has only just begun. Still, the impatience for moves or even rumors of moves is already bubbling to the service among fans of the Black & Red. The former greatest franchise in MLS history has a club legend in charge on the sideline. They’ve got a roster dotted with some potential. They’ve also got nothing resembling a coherent long-term plan.

There may be a logical reason for United to put off a roster revolution, one that goes beyond the swirling (and troubling) whispers that the club is up for sale. DC’s schedule for 2018 is a problem. Waiting for the June 30 opening of Audi Field means playing on the road for the better part of four months. While the back-loaded home slate will be nice, it might not make up for the struggles that will come playing away in a league that possesses such a large home-road split.

New England’s offseason, sure to have its only roster churn, be about one thing. The hiring of a new head coach after Jay Heap’s late-season firing. The Revolution made the MLS Cup final in 2014 under Heaps. Since, they’ve slid back into a pack of clubs that appears to be falling further and further behind the likes of Toronto, NYCFC, and Atlanta. The juxtaposition of Atlanta United with New England is a big part of the push for change. That 7-0 trouncing Atlanta gave the Revs on September 13 still looms.

Any changes in New England are coach dependent. Like United, New England has always appeared hesitant to spend money on top level players. Whether they could attract those type of players in the past or not, the pedigree of the next head coach will be the first indication of the club’s intended approach.

So far the names linked to New England have run the gamut. There’s Tom Soehn, the former DC United boss and the man who handled the interim duties to close out the season. Giovanni Savarese, the New York Cosmos head coach who’s overdue for a shot at MLS. Brad Friedel, American goalkeeping legend. Former US U-20 head coach, Pat Noonan, currently on staff with U.S. Soccer, along with a smattering of others.

Let’s turn to events in Chester. The Union are stuck, for lack of a better description. Underfunded when compared to their Eastern Conference rivals, Philadelphia has attempted to close the gap in other ways. The hiring of Earnie Stewart as Sporting Director was a restatement of purpose, but so far things haven’t changed enough. Philadelphia is still a team that might make a playoff run in a given year, but is more often than not going to find themselves on the outside looking in.

Stewart confirmed that head coach Jim Curtin will be back in 2018. He stressed the importance of continuity on the sideline. Meanwhile, the Union also declined options on a host of players, indicated that an overhaul of the personnel is coming. Gone are central figures from last year, like Ilsinho, Fabian Herbers, and Roland Ahlberg. Philadelphia can negotiate new deals with some, but most won’t be back.

Will the Union commit money to their problems? Or is the budget-conscious, bargain bin ethos that has held sway for the entirety of their existence going to hold?