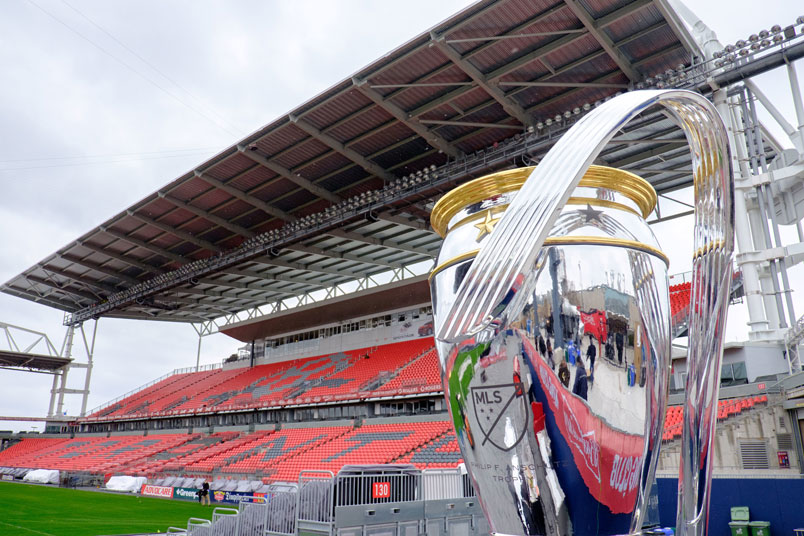 By Jason Davis – WASHINGTON DC (Nov 17, 2017) US Soccer Players – The 2017 MLS playoffs lurch back into action on Tuesday. Columbus hosts Toronto and the Seattle Sounders visit Houston in the first-legs of the two conference finals. It will be 16 days since the last playoff game. That lull robs the postseason of momentum. No team benefits from more than two weeks of preparation. At some point, training becomes stale and the wait for real competition morphs into a complacency.

That danger exists for each of the semifinalists, though every squad has its own unique set of issues. Injuries, suspensions, and field conditions have set the tone for these playoffs. The conference finals will be no different.

Here are the stories of the semifinals for each of the sides left standing. Adversity has a way of appearing at precisely the wrong time.

Toronto FC entered the playoffs as the odds-on favorite. After all, they’re the Supporters’ Shield winners and set a new MLS record for points in the process. Their Eastern Conference semifinal series with the Red Bulls was easy to dismiss as just another step towards a title and an argument for Toronto as the greatest MLS team of all time.

Playing at home, the second-leg against the Red Bulls hardly went as planned. Losing the game wasn’t good, but away goals from the first leg carried them through. It was the physical nature of the game and a few moments of poor judgment that will hurt Toronto into their series with Columbus. Jozy Altidore’s bust-up with Sacha Kljestan resulted in a straight red card upheld by the Disciplinary Committee on Wednesday, meaning he’ll miss the first-leg. A late caution for Sebastian Giovinco will also leave Greg Vanney another star player short.

One of Toronto’s strengths this season is their depth. It seems fitting that the Reds’ chances of reaching a second consecutive MLS Cup will come down to that very thing.

Everybody is talking about the Columbus Crew, and it has very little do with their exploits on the field. They’re playing in their second Eastern Conference final in three years. They even look like a team capable of springing the upset against Toronto. That’s not the story. Instead, it’s the ongoing saga of the club’s potential move to Austin.

The ultimate resolution of that troubling situation won’t come anytime soon. In the meantime, the community in Columbus is rallying around the team as they hit the Eastern Conference finals. All expectations are for a full MAPFRE Stadium on Tuesday. We all know that Columbus can provide the atmosphere. This time, it’s also an opportunity for the fans to express their feelings about the future of the club.

Gregg Berhalter has a good team, good enough to beat Toronto, and good enough to win MLS Cup. Add the drama swirling around them to the mix, and the Crew’s unwritten story is a rich one.

The Houston Dynamo are the outsider in this version of the MLS final four. They weren’t in the playoffs last season like the other three. A new coach, a host of new players, and a new approach following a last-place finish didn’t point to the Western Conference semifinals.

That was before the Dynamo proved almost unbeatable at home. Once in the playoffs, they took out Sporting KC at home and then beat the top seed Portland over two legs. Injuries hampered the Timbers with Houston taking advantage and winning on the road. This turns Houston into the Cinderella story. All they need to do now is knockout the defending champions.

To do it, Brian Schmetzer’s team will have to knockout Houston. For either Western Conference side, the final step is winning the Cup away from home. No matter who comes out of the East, they’ll host the final. Luckily for the Sounders, they have experience going to someone else’s building and finding a way to win a championship game.

Seattle isn’t fully healthy. However, they still have the skill and experience to grind things out in Houston on Tuesday night. Their goal is to make the game that counts the one at CenturyLink Field. There’s even a subplot with star forward Clint Dempsey wanting to be part of an MLS Cup winner rather than on the injured list. For the second season in a row, this could be the Sounders’ story.