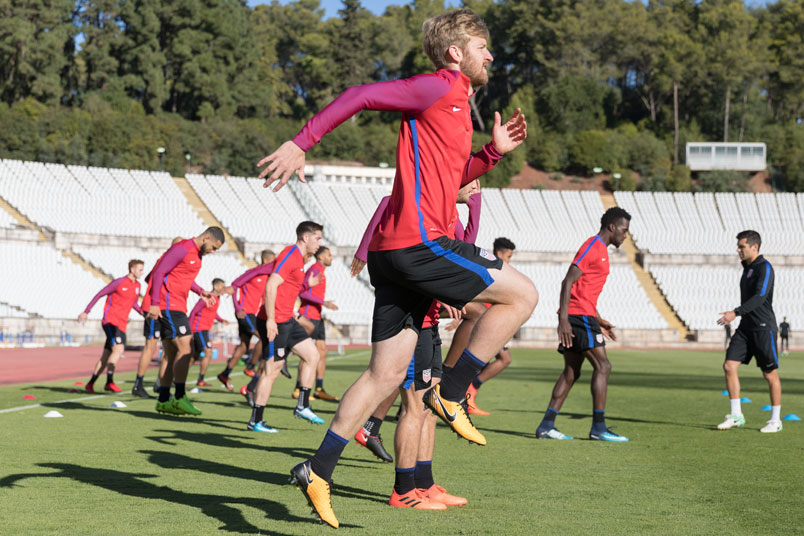 We’re all well aware of the circumstances. Not qualifying for the 2018 World Cup. USMNT coach Bruce Arena resigning. His assistant Dave Sarachan taking over on an interim basis. The US Soccer presidential election cycle delaying a quick decision. Availability of coaching candidates perhaps carrying that into this World Cup summer. The pressure from fans to show that the program can revive itself in time for the next games that count.

So no pressure on the group that spent a week training in Lisbon. This version of the USMNT only has to show potential against one of the best programs in the world. It’s fairer to think of Portugal minus a few of their stars as part of a program that has them the 3rd-place team in the FIFA Ranking. Portugal coach Fernando Santos made it clear when naming his roster that he is scouting for depth for his World Cup squad. That’s the job right now.

With that in mind, this version of the USMNT is facing a motivated opponent with clear goals. Use this opportunity to make it hard for Santos not to pick them.

Clear on the counter

USMNT player Alejandro Bedoya outlined the squad’s counterattacking focus in comments to US Soccer. It’s no surprise that the USMNT is thinking counter here, trying to frustrate the Portuguese attack while taking advantage of space behind the defense. It’s the first part of that the USMNT needs to get right. Making defensive stops is job one, something that might be asking a lot of an unfamiliar group. The US back line is a long-term issue that seems to unravel due to injury and availability each time a solution appears.

Youth in the squad

Interim coach Dave Sarachan leaned on U-17 and U-20 players because they’re the best options to revitalize his lineup. There wasn’t a lot of sense in calling up a squad that was a continuation of what we saw in World Cup qualifying. The MLS playoffs helped with that, taking several regulars out of consideration. So the USMNT has space to experiment, potentially capping players before they’ve made an appearance with a professional club. The USMNT going young now only sends a temporary message. The next stage is whoever gets the USMNT coaching job. That said, for now, it’s a temporary message that’s on point.

Clemente Lisi described the situation for an interim coach with the USMNT, and it’s worth repeating. Dave Sarachan’s job right now is to instill the belief that what happens during his tenure will count. Since he doesn’t know who might become the next USMNT coach, it’s a tough situation. It’s not just about doing the best he can since he won’t be taking the team into a tournament. It’s about setting the right tone so the next stage of development isn’t about starting over. That’s a difficult job, with Sarachan in the situation where trying his best is the only way forward.

Game on the schedule

Whatever US Soccer had planned for November before not qualifying for the World Cup, the safe assumption is that it was two games. Instead, US Soccer scheduled one on the back end of the window with plenty of time to prepare. That’s important with a mixed group to be sure, but it also puts the focus on training and reps in an environment where time is usually a luxury. That needs to show against Portugal, and even small ways count. Right now, player familiarity is a plus and so is comfort with the tactics and set pieces. It’s a forward progress scenario while not discounting why the program is in this situation.

What is a result right now?

Not losing to Portugal in Leiria is the clear answer. This version of Portugal has issues of its own. It isn’t a given that trying to work in new players will benefit Portugal over 90 minutes. There’s a group of experienced players in the USMNT squad to go along with the youth movement. What might end up being key to a chance for USMNT success is Sarachan’s substitution policy. He could end up in the position where he needs to act on the difference between valuable experience for younger players and obvious mismatches. Get that right with six substitutes, and this could become 90 minutes of game management.