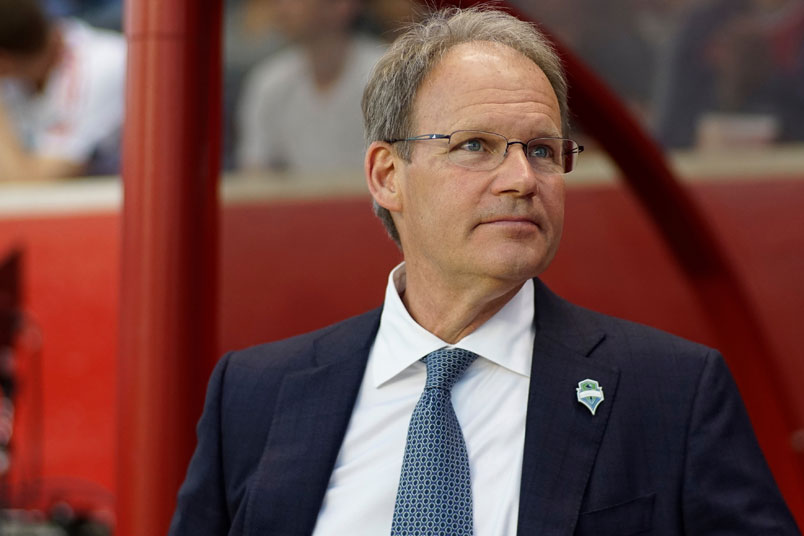 By Jason Davis – WASHINGTON DC (Nov 22, 2017) US Soccer Players – The challenge for the Columbus Crew at home in the first-leg of the Eastern Conference final against top-seeded Toronto FC was obvious. The suspensions of Toronto’s Jozy Altidore (red card) and Seb Giovinco (yellow card accumulation) sent a clear message to Columbus. Take advantage now.

Without Giovinco and Altidore, TFC had all the more reason to manage the game. Their priority was escaping Columbus without giving up a goal. Scoring, it happened, would have to come from a moment of magic, a clinical counter-attack, or a set piece. The numbers the Reds put behind the ball put the pressure on the Crew. Press the action, breakdown the defense, and create an advantage before next week’s second-leg.

Columbus nearly managed it. In a game that was always going to turn on a few crucial moments, the Crew found themselves to be short on luck in two.

Clear-cut penalties are few and far between. Most often, calls on fouls in the box are subjective and maddening. What one observer sees as a foul that demands a spot kick another will see as a dive the requires a caution for the attacking player. Simulation isn’t supposed to cancel out an actual foul, but that sometimes seems to be what stops a referee from blowing his whistle.

Pedro Santos of Columbus knows all about the gray area involving penalty calls. When he touched the ball around Toronto goalkeeper Alex Bono and went down, he expected to see referee Robert Sibiga pointing to the spot. Instead, Sibiga issued a yellow card to the winger for a dive and punctured Crew hopes of a lead in the opening minutes of the second-half.

Toronto was largely untroubled by Columbus. They eased into a comfortable back-foot posture that rarely saw them threatened. Through 80-plus minutes, the Reds were doing what they came to do without their first-choice strikers.

Columbus does have moments to regret beyond the call that didn’t go their way. Late in the game, with a goalless tie drawing to a close, the Crew finally created a clear-cut chance in Toronto’s box. Pushing numbers forward in a bid to find the precious goal, Columbus saw the ball fall to fullback Harrison Afful just yards from the net off a Toronto miscue. Afful hit the shot well but fired it too close to Bono. TFC’s keeper parried it away. Moments later, Justin Meram put a header off the crossbar ruled offsides.

Toronto played the game they wanted. Toronto got a result they’ll find acceptable.

The Western Conference final first-leg delivered something very different. A set piece goal and a red card flipped the game in favor of the visiting Seattle Sounders. Now, the Houston Dynamo face a gargantuan task in the return leg.

The defending champions didn’t look dominant against Vancouver in the conference semifinal round. Still, it’s important to remember that Seattle was dealing with several injuries to key players. A tweaked lineup prevailed over the Whitecaps. That showed that while Toronto gets most of the attention for their remarkable depth, the Sounders are no slouches in that area.

The depth was on display at BBVA Compass Stadium in Houston. Midfielder Gustav Svensson, partnering with Cristian Roldan in the absence of Osvaldo Alonso, connected with a corner kick in the 11th minute to give the Sounders a lead that put them in control of the series. A red card to Jalil Anibaba 17 minutes later put the first nail in the Dynamo coffin. Only a save by Dynamo keeper Joe Willis on Nicolas Lodeiro’s subsequent penalty kick attempt delayed Houston’s effective elimination.

Anibaba’s red card was mildly controversial, if only because the Laws of the Game now dictate that a player does not automatically receive a red card when a penalty is giving for denial of a goal scoring opportunity in the box with the foul resulting in a penalty. Anibaba seems to have transgressed within the narrow exception (grabbing and pulling included) that allowed for a dismissal on top of the penalty.

The Sounders added a second goal and locked down a commanding lead in the seires through Will Bruin just before halftime. Joevin Jones provided the pinpoint cross, a part of an excellent night on the left side of the Sounders formation. Jones wasn’t the exception. Roldan, Svensson, Lodeiro, and Victor Rodriguez playing the second-half were all fantastic.

Seattle head coach Brian Schmetzer will have to feel good about the result. He also got the opportunity to rest Clint Dempsey for the second-half while getting Rodriguez minutes in the process.

The only complication for Seattle is a yellow card accumulation suspension for defender Roman Torres. He picked up a silly caution with the game already decided.

Schmetzer has a comfortable cushion and that depth. The Sounders are big favorites for a good reason. It will take a massive effort from Wilmer Cabrera’s Dynamo to spring the upset next week.