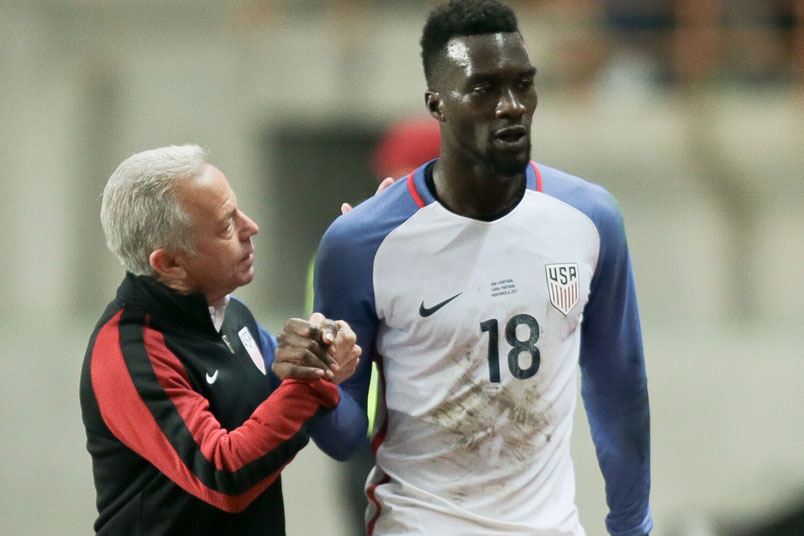 The last time the USMNT played a game like that, the year was 1986 and the opponent was a Mexico 86-bound Canada. The modern era of American wouldn’t kick off for another three years with the Americans’ shock qualification for Italia 90. That was the achievement of a young group of unheralded players who were almost to a man new to the program during that cycle.

In 1986, the United States was fodder for a warm-up friendly as Canada prepared for that summer’s tournament. The Americans had little to play for other than a bit of pride and a still fuzzy dream of getting to Italy. A paltry 5,182 fans showed up at the Orange Bowl in Miami to watch a goalless draw. It was a very different era of American soccer.

In 2017, the United States isn’t supposed to be fodder, for Portugal or anyone else. The humiliation of failing to qualify for a World Cup for the first time since 1986 will dog the program for years to come. It colored the proceedings in Iberia on Tuesday. Dave Sarachan, that former UVA assistant thrust into an interim coaching role after Bruce Arena’s departure, did the only thing he could with the roster. He picked a majority of young and/or untested players as the senior team regroups and looks to 2022.

Meaning becomes tricky here. With US Soccer unlikely to name a permanent head coach until next spring, evaluating the players in the context of the program is difficult. A massive qualifier undercuts every observation.

However, this was still the first step towards rebuilding the side and moving players into the team who could help return the United States to the World Cup. The star of the show was one of those players, 19-year old Weston McKennie. McKennie’s journey from the FC Dallas academy to Schalke of the German Bundesliga is, like the story and rise of Christian Pulisic, an indication all is not a flaming disaster in the American game. McKennie scored the Americans’ only goal of the night on a slick bit of dribbling and a skillful finish. That will only drive up the interest in his progression in Germany. It should keep him in the plans of whoever takes the coaching reigns of the team moving forward.

McKennie wasn’t the only player to acquit himself well in midfield, or even the only who did who came out of an MLS academy. Sarachan’s decision to line up a trio of McKennie, Kellyn Acosta, and Tyler Adams as three-quarters of a midfield put a spotlight on three players who represent modern day efforts to teach and develop young players. Like McKennie, Acosta emerged from FC Dallas’s program. Adams is a product of the New York Red Bulls system.

All three did well with their roles in the 4-1-4-1 system employed by Sarachan. All three played both sides of the ball with enough intelligence and savvy to give the Americans the advantage in the run of play for a healthy portion of the match. Danny Williams, who sat behind them as the lone defensive midfielder, provided enough support to allow for the group to get forward.

Williams was part of a different group on the field in Portugal, the overlooked. The Huddersfield Town midfielder fell out of favor in recent years and didn’t play a role in the final round of the qualification campaign. His return to the team and strong showing adds to the questions over selection in the failed attempt to reach Russia, as does the debut and strong play of forward CJ Sapong. In a player pool short on center forward options, the lack of call-ups for Sapong seemed shortsighted at best. Though he didn’t score against the Portuguese, his holdup play and ability to find space showed the type of ability that might have aided the USMNT in the Hex.

Of course, with the Hex over and the Americans unqualified, Tuesday was less about what might have been than it was about might be. To that end, the youth movement showed in the defensive group as well, with Matt Miazga (22) and Cameron Carter-Vickers (19) both getting time at center back. Twenty-two year old goalkeeper Ethan Horvath started between the sticks, a nod to the need to find a suitable successor to Tim Howard and Brad Guzan. Horvath made a mistake that gifted the Portuguese a goal and prevented a US win, but he seems likely to get more looks with the first team in the future.

The USMNT has no choice but to look forward. That means the next game on the schedule as they push to return to respectability. A 1-1 draw on the back of a reasonably good performance featuring young, new faces serves as a building block. More than even most friendlies the value of the game and the level of competition merits skepticism, but that doesn’t mean that McKennie, Acosta, Adams, and others won’t take something with them from the match.

It’s been more than thirty years since the USMNT played a game like the one they played in Leiria, Portugal on Tuesday. The distinct hope is that they’ll never play one like it again.