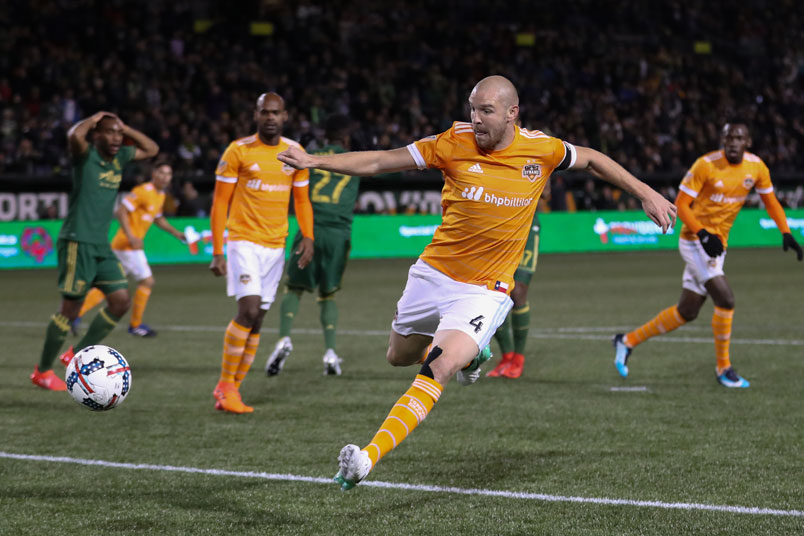 By Clemente Lisi – NEW YORK, NY (Nov 20, 2017) US Soccer Players – The MLS playoffs version of the Final Four finally kicks off Tuesday. We’re used to the upset story in the MLS playoffs, a competition where the tag of “favorite” seldom counts for much. From the Houston Dynamo knocking out the Portland Timbers and the Columbus Crew getting past NYCFC, 2017 is showing once again that anything can happen. MLS calls it parity, but it’s more about being unpredictable.

That’s what lovers of the playoffs cite as the reason why MLS is both so great and unpredictable. It’s a fair criticism that the playoffs turn the regular season into a long seeding tournament. However, the postseason does breathe new life into mid-table teams while keeping the Supporters’ Shield winners on their toes for fear of a potential upset. The Conference Finals have given us the Crew vs Toronto FC in the East and Dynamo vs Seattle Sounders in the West. Both are tasty matchups with the favorites – Toronto and Seattle – by no means locks to reach the final. It is a wide-open semifinal round. Anything can happen. Upsets abound.

The playoff version of the Trillium Cup will be special. Columbus, fighting for both a title and a plan by which the owners want to move the franchise to Austin, have found a renewed fighting spirit over the past few weeks. Toronto, on the other hand, will want to impose its dominance and can easily do it with its stacked roster. Seattle, the defending champions, will need to ward off the Dynamo’s newfound winning attitude. Here are three storylines to watch for:

How will the international break affect teams?

This is a question that always looms over the MLS postseason. The long break often favors the teams that limped to this point and hurts the momentum of those who came flying into this part of the year. In other words, it depends on who you are. For Toronto and Seattle, favorites to reach the final, the break allowed the teams to tend to injuries and regroup after a long season. A rematch of the 2016 MLS Cup Final could very well be in the works.

For Houston and Columbus, on the other hand, the break may not turn out to be such a favorable thing. For Columbus, the defeat to NYCFC in the conference semifinals snapped the team’s 12-game winning streak. Nonetheless, the Crew are a team with momentum. A break longer than a week isn’t good for any team, especially an underdog looking to make a splash. This is a team on an emotional rollercoaster amid the widespread #SaveTheCrew campaign.

The break also hurt the Dynamo. Three players, Honduran internationals Alberth Elis, Romell Quioto and Boniek Garcia, all took part in their national team’s World Cup playoff against Australia. Honduras not only failed to qualify following the two legs, but the players had to travel across the Pacific for one of those matches. That physical and mental fatigue could be a negative versus Seattle.

Can underdogs Houston or Columbus reach the final?

Very few people would have had either the Crew or Dynamo going this deep into the playoffs at the start of the season. Then again, this is MLS. The postseason’s volatility makes it so that sneaking into the playoffs, then going on a run can result in a confetti shower and trophy in December.

While Columbus is currently the hottest team in the league, the Dynamo have also overachieved. Like Columbus, Houston is also thriving on emotion and hard work. Their city endured a hurricane, celebrated a World Series title, and now has a soccer team a home-and-home away from a final. Coach Wilmer Cabrera has injected confidence in a team in much need of it.

As he did throughout the regular season, Cabrera may need to rotate his squad to get his side past Seattle. Asked about the travel his players endured during the World Cup playoffs, Cabrera told reporters, “When you have to travel to the other side of the world and play, with a 15-hour difference, it is tough. No matter what, it is going to take a lot of the players to recover, but we are here with 20 to 24 players. So, we’re fine.”

Seattle remains a well-run team with Dempsey assuming the role as leader. He missed the second-half of last season due to an irregular heartbeat. This fall, Dempsey isn’t only available, he’s looking to help the team repeat.

Recently named MLS Comeback Player of the Year, Dempsey scored 12 goals during the regular season and two more in the playoffs. In a recent interview with the Sounders’ website, Dempsey said: “I am enjoying this year and I am making the most of it. As long as I believe I am making a difference on the field I want to keep going.”