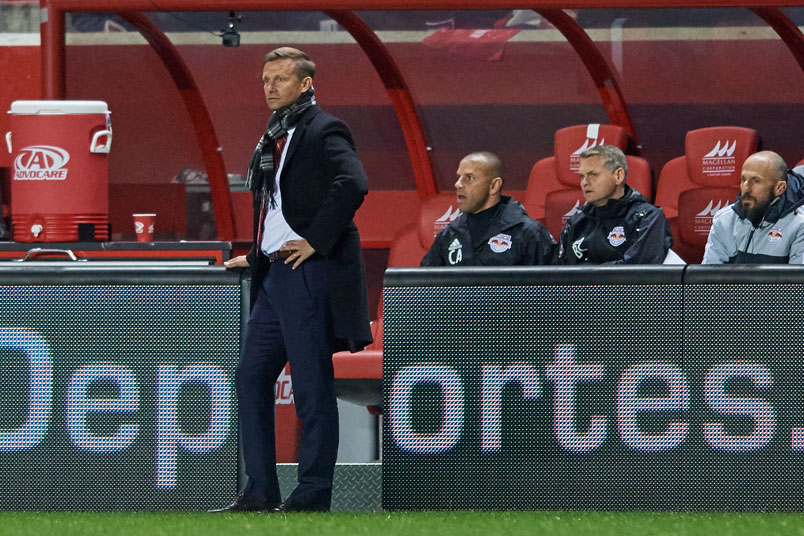 By Jason Davis – WASHINGTON DC (Dec 29, 2017) US Soccer Players – By now, you’ve heard the somewhat surprising news that the New York Red Bulls are actively shopping playmaker Sacha Kljestan. By the time you read this, Kljestan could be a member of LAFC, Minnesota United, Orlando City, or some other MLS team. Even if Kljestan is still technically a Red Bull when the new year rolls around, it seems likely he won’t be lining up for them when the season kicks off in March.

If the Red Bulls swap Kljestan for a pile of allocation money, it will be the second year in a row where they’ve traded away their team captain and major contributor. Last year’s trade of Dax McCarty established what appears to the new modus operandi of New York: Move a top player while their value is still high ahead of a potential dip in production.

Kljestan, 32, might have several more seasons of elite play left. In a different era of MLS, Carlos Valderrama had more assists than Kljestan over three seasons. He’s the only one. In both 2016 and 2017, Kljestan led MLS in WhoScored’s “Key Passes Per Game” category. No one in MLS has been better at making things happen on the attacking end of the field than Kljestan.

So why is he expendable for the Red Bulls? New York is a team that is establishing themselves as willing to push into the future with a confident approach to player acquisition that makes no room for sentimentality. If McCarty’s departure wasn’t enough evidence, the likely trade of Kljestan would confirm what fans of the club have already realized.

At Red Bull Arena, it’s the Jesse Marsch show. Marsch successfully survived a tug-of-war with Ali Curtis last winter, and now seems in firm control of the direction of the club. There’s no reason to believe that the possibility of trading Kljestan isn’t part of Marsch’s plan.

Turnover in the player ranks is part of life for soccer fans around the world. If we’re completely honest with ourselves, we’re only often rooting for a shirt. Identity is paper thin when even a team’s best players can be shipped out and summarily replaced at a moment’s notice, either to cut payroll or to ostensibly improve the team. Modern soccer’s economic model demands that team leadership make brutal decisions over personnel, giving almost no thought to how fans may respond to those decisions.

If you can’t pin an identity on a player group of players, it has to come from somewhere. MLS clubs especially are constantly chasing the notion that some characteristic can embody their approach to the game. Often reductive when we try to express them in words, they nevertheless serve an important role in connecting fans to their teams. In the absence of player consistency, fans need something that goes behind simple concepts like local pride.

History and tradition can serve as a foundation of identity in most parts of the world. That has a much smaller role to play in Major League Soccer. There’s no hard and fast rule as to when enough time has passed to give a clubs a sense of self. Still, more than a few generations have to go by before a team can claim to have a deep, meaningful history that gives color and depth to its current character.

Red Bulls fans want a championship. The top prize has eluded the club for the entirety of its 22-year history. The team is one of three original franchises alongside New England and FC Dallas without an MLS Cup title to its name.

The only real marker of New York identity over the course of that time frame is one of failure. That’s not just measured by a lack of tournament trophies, but by how the club managed to fritter away their best chances at glory.

The winds of change blowing through MLS front offices mean its very unlikely Red Bulls fans will be familiar with whatever player arrives to replace Kljestan. MLS is increasing its reach into player markets it previously avoided, bringing in younger players of high potential but little relative experience. Until very recently, Kjestan’s successor would have likely been an established MLS player or a famous foreign name with a history of stellar play at a big club in Europe. That might not have meant continuing a cohesive identity either, but at least it gave fans an understanding of the risks their club was taking in swapping out an influential contributor for a new signing.

The pressure to not only win games but to do it with entertaining soccer is rising dramatically across MLS. Toronto FC’s championship season pushed the bar higher than ever before for clubs who want to climb into the league’s elite group. The Reds didn’t win by fluke, sliding into the playoffs on the back of a late push and riding a hot hand and good luck to a championship. They won because they were better than everyone else, and they used significant resources to make them so.

New York isn’t the only club feeling the pressure and responding with dramatic choices. The impact of new money and new opportunities is evident from San Jose to New England. Whatever identities MLS clubs have established will be threatened by reality. Holding onto a beloved star for a year or two too long might be the difference between competing for a championship and sinking into the bottom tier of an increasingly stratified MLS.

If fans want to win, they’ll have to accept the new extra-brutal MLS landscape. Well, at least until the brutal decisions prove to be the wrong ones.