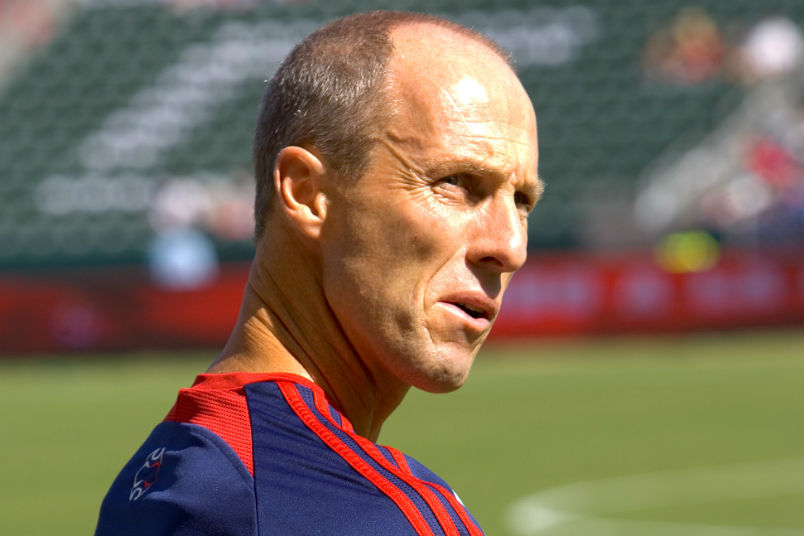 By Luis Bueno – RIVERSIDE, CA (Dec 13, 2017) US Soccer Players – That sound in downtown Los Angeles of hammers and drills, the beep-beep-beep of cement trucks backing up is helping forge two things. LAFC’s Banc of California Stadium offers such an array of noises, promising to leave in its wake a modern stadium that will certainly captivate LA. Those noises though also ring out from the club’s front office as the team is earnestly building its roster. LAFC is starting to take shape with the club acquiring players through the expansion draft as well as through trades within MLS.

Aside from the tangled web of Major League Soccer’s complicated player acquisition rules, however, there is one obstacle that LAFC will have to face that most other MLS teams do not. Sitting in LAFC’s backyard is the league’s most successful club who is also looking to gain top-level talent.

The rivalry between LAFC and the LA Galaxy is in its infancy but is very much in existence. Now, as the clubs are in search of players to build up or rebuild their respective rosters, the rivalry will play out on a greater stage. While it will not be as direct as it will be when the two meet in a game, it is still a competition that will have a winner and loser.

For the Galaxy, that is old hat. For a decade, the Galaxy competed with – and won – the battle for LA-bound players. To think that this rivalry will mirror that one is invalid. Unlike the previous battle, the footing is closer to equal this time around. Some things will be in LAFC’s favor.

Like when selling real estate, location location location matters. Other MLS clubs have stockpiled an impressive array of talent without having palm trees and Hollywood in their backyards. Toronto FC won MLS Cup 2017 with a loaded roster while Atlanta United captivated attention with an impressive collection of players.

There is something about Southern California, though. Former Galaxy star David Beckham chose Los Angeles and still resides there, at least part of the time, five years after he left the Galaxy. Bayern Munich star Robert Lewandowski found himself linked to the Galaxy and LAFC after his wife mentioned moving to Los Angeles at some point in their future.

Unlike the previous LA-based MLS club, though, LAFC has its own location to try and sell above the Galaxy’s and that figures to work in LAFC’s favor. Incoming LAFC players know that this is the beginning of something grand while potential players will see joining the club as an opportunity to get in on the ground floor. The stadium is still in the midst of construction, with stands and facilities taking more and more shape daily.

Not only will the stadium be a strong selling point but the surrounding area offers more than the StubHub Center. Banc of California Stadium sits in Exposition Park, with the Los Angeles Memorial Coliseum next door. Also within walking distance is the California Science Center – home to the Space Shuttle Endeavor – as well as the Natural History Museum. The stadium promises to be an easier destination to reach than StubHub Center.

Now, players can live wherever they want, and many LA Galaxy players over the years have taken up residence in beach-side locales such as Manhattan Beach and Torrance. It is easier to get to Carson from those towns than it is to downtown Los Angeles, but there are plenty of intriguing places to live inland and closer to Banc of California Stadium.

The chance to play in that stadium though could be what puts LAFC over the top. Competing for attention in the Los Angeles market is a difficult thing. The Dodgers were the greatest thing in Southern California for most of 2017. Then it was the musical Hamilton, which opened in August and runs multiple times a week to sold-out audiences. The LA Rams have seen an uptick in attendance, a result of the team’s rise to prominence in the NFL. The Rams had a season-high 73,736 against the Arizona Cardinals on October 22 and an impressive 67,752 for the Philadelphia Eagles on Sunday.

LAFC will be able to sell tickets from the start but how they maintain that is the challenge. Given the club owners’ collective expertise levels, the team will certainly try and captivate the attention not only by winning but by stockpiling talent.

LAFC’s first-ever coach is Bob Bradley, one of the winningest coaches in MLS history and a coach that has been a trailblazer abroad. The club’s first major signing was an impressive one. Carlos Vela will be the team’s centerpiece player when the season kicks off in March. The team has made the most of its limited time in acquiring players from within MLS, landing central defender Walker Zimmerman from FC Dallas and Laurent Ciman from Montreal to anchor the backline. Rumors link former Chivas USA standout Sacha Kljestan with a move that would bring him back to his Orange County roots and reunite him with Bradley.

Playing for LAFC means playing for a team with no history. That part worked against Chivas USA’s favor. Chivas USA itself had no history but it shared a name with a club with a grand one. That shadow cast was too much for the MLS club to overcome. The Galaxy has a great history, perhaps an unrivaled one in this league. The pressure to get the Galaxy out of the cellar and back to competing for MLS Cups is strong in Carson. Players then will have to choose which is better – writing history or living up to it.

However this ongoing drama plays out, Southern California soccer fans will win. Unlike the Galaxy and Chivas USA player battles, this one will force the other team to try and improve on each player the other brings in. If the rivalry is already this intriguing, imagine when they play each other with MLS points on the line.