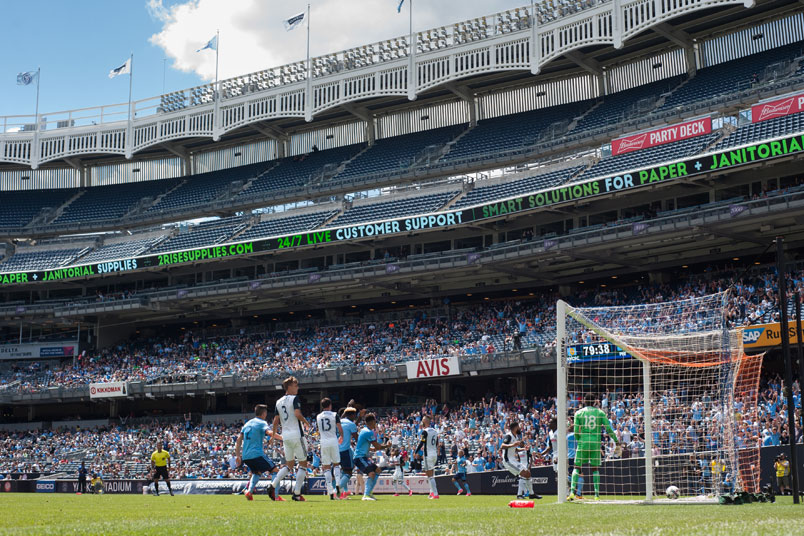 By Jason Davis – WASHINGTON DC (Dec 22, 2017) US Soccer Players – Major League Soccer descended upon Nashville on Wednesday where they announced the 24th franchise. The mayor of Nashville, Megan Barry, the governor of Tennessee, Bill Haslam, and the lead investor in Nashville’s MLS bid, John Ingram, joined MLS commissioner Don Garber in celebrating the news that first division professional soccer is coming to the Music City.

Nashville beat out eleven other cities for the first bid in this round of MLS expansion. That’s thanks in large part to its status as an up-and-coming market and positive demographics. From a group of four finalists that includes Sacramento and Cincinnati, two cities that have a proven recent record of soccer interest, Nashville emerged as the first expansion site selection.

The Ingram family’s financial support was a big boost to the bid, as was the involvement of the Wilf family. The league has made a conscious effort to bring in big money ownership as it looks to improve its financial clout on and off the field.

Nashville’s bid also benefited from a stadium plan for a 27,500-seat venue on a fairgrounds site not far from downtown. The city will kick in a large portion of the hundreds of millions it will take to finish the project.

While Nashville’s soccer fans can look forward to their soccer-specific stadium, it’s not the same story in the biggest market in the country. New York City FC fans are dealing with an apparent setback in their team’s quest to erect a soccer stadium to call their own.

The decision by MLS to expand into New York City proper is not without its merits. The New York Red Bulls, despite leaning on the country’s biggest city for their name, have always struggled to capture the attention of soccer fans across the river from their New Jersey base. A stellar new stadium in Harrison failed to entice denizens of New York City proper to travel over the bridge to see one of MLS’s original franchises. MLS granted a franchise to City Football Group for the 2015 season after years of holding onto the market in theory. The reasoning was always obvious. Having a soccer presence inside the five boroughs would allow the league to reach more of the media and marketing industries directly.

Three years in, it’s probably true the center of the nation’s biggest market is more aware of MLS than ever before. That includes the team playing at an address that everybody in New York City knows. It’s still a baseball stadium with a primary tenant that isn’t New York’s MLS team. NYCFC’s residency at Yankee Stadium in the Bronx isn’t convincing many people about MLS in the city. The longer the club is stuck playing in that awkward setting, the longer it will take for the team and MLS to establish the market. Soccer in a baseball stadium requires effort on the part of all involved, including the fans.

About that latest setback. NYCFC had a bid in to build a soccer stadium at Belmont Park. The racetrack site drew attention from the NHL’s Islanders. They also made a move into the city, leaving Nassau County for Brooklyn. Their stadium is an odd fit for pro hockey, with sections of the stands offering limited views. It’s a basketball arena first, something that has the Islanders looking elsewhere.

On Wednesday, the Empire State State Development Corporation, the body tasked granting rights to sites for economic development in the State of New York, chose the Islanders proposal for Belmont Park. They’re planning to build am 18,000-seat hockey-specific arena. Ostensibly, the decision is a setback for the MLS club.

Talk to fans of the team, however, and it’s likely that the message will be one of relief. While Belmont is just on over the border from Queens in Nassau County, it does not fit into NYCFC’s purpose. This is a team for the five boroughs, not five boroughs adjacent. It’s also quite the trip from Yankee Stadium and a lot of the team’s fan base. While Yankee Stadium is an imperfect place to play soccer matches, it has helped define the source of much of the team’s core support.

It wouldn’t be right to say that NYCFC should be happy to lose out to the Islanders. The Belmont site was a potential solution since the club desperately needs to find a way out of Yankee Stadium. Then again, it wouldn’t be wrong to suggest that NYCFC avoided a potential drag on its long-term success, either.

NYCFC felt compelled to bid on the Belmont site because opportunities to secure land for a stadium in or near New York City are so few and far between. Yet situating themselves in Belmont Park might have limited the club’s ability to appeal to soccer fans inside the official borders of the city it claims to represent.

This isn’t a new scenario for MLS. NYCFC was caught in-between with Belmont in very much the same way that the Colorado Rapids, FC Dallas, and the Chicago Fire were caught in-between with Commerce City, Frisco, and Bridgeview. In each of those three cases, an MLS team jumped at the opportunity to build a soccer-specific venue on the suburban outskirts of their home market. At the time those respective paths were chosen, there was no obvious alternative on the horizon.

All three of those teams have good reasons for reconsidering their choices. There was no perfect solution to the problems they faced at the time, just as there’s no perfect fix for NYCFC’s situation. All involved knew building a stadium in Nw York City was going to be a struggle from the beginning. Even with the heavily financed City Football Group, there isn’t a lot of available space in New York City. This was always going to be a struggle.

Now, the question in light of the Empire State Development Corporation’s decision to give a bid to the Belmont site to the Islanders is whether a chance to build a soccer stadium inside of the five boroughs will ever present itself to NYCFC. New York City’s soccer club lost its bid to build a stadium in Belmont on Wednesday. It might also have won a chance at a better future. The problem for NYCFC and its fans is that there’s no telling if that better future will ever come.