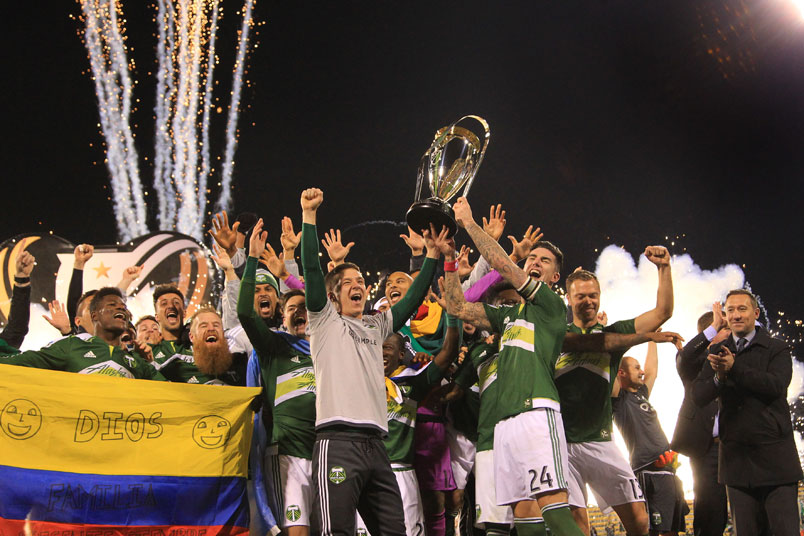 By Jeff Rueter – SAINT PAUL, MN (Dec 7, 2017) US Soccer Players – The Portland Timbers seem to be a team on the cusp of reaching their potential. Joining MLS in 2011, Portland seemed poised to tap into the success their northern neighbors were already having. Promising early returns showed up in fits and starts through their first two seasons. Then, Caleb Porter signed on as head coach in 2013. The Timbers won the Western Conference that season, losing in the conference finals. Portland became something of an odd-year team, winning MLS Cup in 2015, and topping the West again in 2017.

In many ways, the Timbers successes track alongside their star midfielder, Darlington Nagbe. Like the team itself, Nagbe took a couple of years to reach his lofty potential. Consistency wasn’t his forte in early years. Reunited with his college coach Porter, he became one of the most well-rounded midfielders in Major League Soccer.

Last winter, Nagbe nearly left the Rose City. A deal with Celtic fell through. Instead, it’s Porter who’s cutting ties, abruptly exiting the club after five years at the helm following a playoff exit to the Houston Dynamo.

Portland is far from the only team who’ll have a new coach in 2018. Five other teams have changed directions this offseason, with their new bosses falling into two main categories.

Two of them have Premier League experience. LAFC landed Bob Bradley’s commitment long before the winter, and he represents the only new hire thus far with MLS coaching experience. His last stop with Swansea City ended before he had a single transfer window to help alter his side’s roster. Remi Garde’s prior post was with Aston Villa, during the side’s most recent EPL campaign in 2015/16. He’ll be looking to recreate his Lyon magic with the Montreal Impact.

The second group seems to prefer potential and room for growth over previous results. The New England Revolution signed Brad Friedel in something of a surprise move. The USMNT legend is a well-known commodity from his days between the posts and as a color analyst on FOX. His only previous coaching experience was with the USMNT U-19 team and as an assistant for the U-20s that won the CONCACAF Championship.

Meanwhile, the Colorado Rapids will try to return to promise under the guidance of Anthony Hudson. A former USL player, Hudson most recently took the New Zealand National Team to the brink of World Cup qualification. The last club he coached was England’s Newport County when they were playing non-league football.

Both schools of thought have shown to be successful in MLS over recent years. A “proven” winner abroad doesn’t always translate to the league. For every Tata Martino, there’s a Ruud Gullit. In many ways, Bradley seems the closest thing to a safe bet to succeed with his new club, as the other four will have more to prove.

Back in Portland, the last update given to the media about the Timbers’ coaching search came on November 29. General manager Gavin Wilkinson claimed the club wanted to find their new head coach by the end of the calendar year, picking from a pool of eager candidates. That they have choices is hardly surprising. Portland is one of the most attractive markets in the league just based on public support.

What they’re not is the hot new thing in MLS. The expansions into Orlando and Atlanta have shown that cities with less soccer history can fall in love with the game. Minnesota sold out their final four games of the season. With Allianz Field opening in 2019, the groundswell will only continue to build.

While Portland was able to win a title in 2015, the club and its fans alike don’t seem to be content. The Sounders were able to follow suit in 2016, and on Saturday will have a chance to pull off a rare title defense. In recent years under Porter, the Timbers seemed to be one of, if not the most talented teams in the league. Depth was always a concern along with players losing focus during the game. That’s cost the Timbers crucial points and playoff results.

If Portland is going to take the next step and become one of the true elites in the league, they can’t settle. The hire could come from the domestic lower leagues, where the likes of Marc Dos Santos and Gio Savarese are available. They could turn their gaze abroad, following in the Martino mold to find someone with a South American pedigree to match their designated players.

Whatever the case, this is a pivotal moment in the Timbers’ history. Given their patience in hiring a coach, they seem to understand what’s in play.