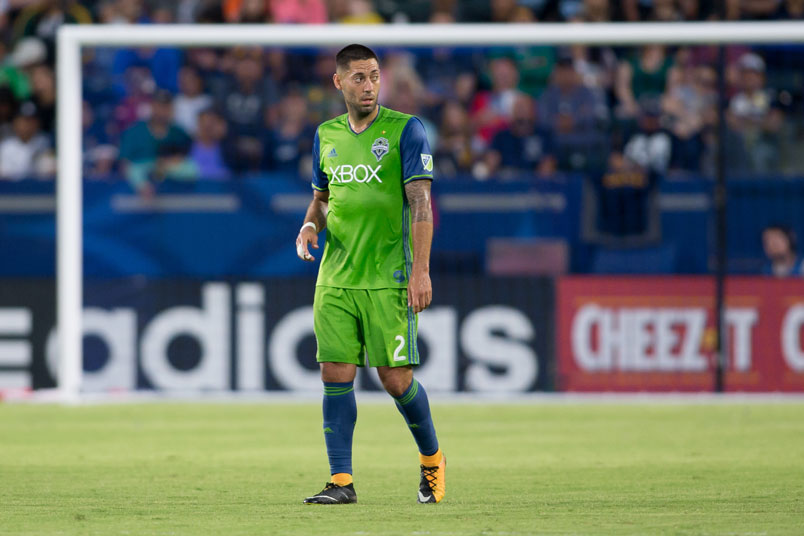 By Charles Boehm – WASHINGTON, DC (Dec 1, 2017) US Soccer Players – Soccer fans and analysts often engage in a dour sort of ageist arithmetic about players. The ones in their mid-to-late 20s are deemed “in their prime.” Those on the north side of 30 tend to not get the same respect. Anyone under age 20 or so is inherently more valuable because of their upside in the years ahead.

These calculations are all too easily applied to careers when a national team misses out on a World Cup like the USMNT recently did. Ditch anyone older than 23, some proclaim and get an early jump on Qatar 2022. These are dangerous generalities, of course, as the deciding game in the Seattle Sounders vs Houston Dynamo Western Conference final series reminded us at CenturyLink Field on Thursday night.

Houston’s crafty Uruguayan attacker Vicente Sanchez, who is reportedly set to announce his retirement, was arguably his team’s best player in a losing cause. Sanchez carved out several dangerous moments one week before his 38th birthday. 34-year-old Clint Dempsey scored his third goal of this postseason as the Sounders continue their bid to defend their MLS Cup title.

Dempsey’s career MLS playoff stats now stand at seven goals and three assists. He appears to be on course for a major role in next week’s MLS Cup final rematch with Toronto FC after missing Seattle’s 2016 run due to a heart condition.

“It’s always great to be playing in the big games,’’ Dempsey told reporters postgame. “That’s what you dream about as a kid. For me, if I’m not making an impact, that’s when you’ve got to hang them up, so it feels great to be able to make an impact.’’

It seems as if we’ve been talking about Dempsey’s age forever. Perhaps that’s due to his pioneering role as one of the first USMNT stars to return home from abroad and sign a superstar contract in MLS. That 2013 decision confounded many pundits, some of whom extrapolated that he must be over the hill or close to it to make such a move. Instead, he proved to be a trendsetter in that regard. In retrospect we must salute both his self-awareness and longevity.

Four years later, he remains a menacing attacking presence for both club and country. Dempsey is now a seasoned and evolved version of the player that first seared into our collective consciousness as a brash young talent with the New England Revolution. He might not be quite as quick or as eager to race from end to end as the old days, but his soccer brain is as sharp as ever. Sniffing out space and executing clever decisions at high speed. Tormenting defenders in and around the opposition’s penalty box. Keeping his fingers on the pulse of the game at a level of sophistication that’s rare in US soccer history.

Earlier this year data-crunching soccer journalist Michael Caley wrote a piece for ESPN on “the age curve,” an analytics concept that seems to measure how players mature, what skills wax or wane along the way and which positions ripen at what rates. It’s a key asset for clubs seeking to limit their risks and maximize their returns on aging players. It also offers some insight on how and why the likes of Dempsey and Sanchez manage to keep on keeping on.

Goalkeepers and center backs tend to enjoy the most longevity, and it’s not hard to see why. Their responsibilities require high levels of decision-making, leadership, communication and tactical intelligence, allowing them to outwit and outlast younger, faster counterparts. You might expect it to be the opposite for attacking players, and in some departments it is. In the bigger picture, it’s not quite the case.

“The aging curve for attacking players shows a tendency for players to take fewer shots as they age,” writes Caley, “but to increasingly get on the end of better chances and therefore make up the difference … While shot-taking, tackling and dribbling will likely fall off [with age], more refined skills like creative passing and finding space for big chances can keep a player going past the usual peak of 26 or 27 years old.”

That quote helps explain why Caley rates striker as third on the list of “least age-sensitive” positions. That succinctly distills Dempsey’s essence, doesn’t it?

Like some of the all-time greats before him, the lanky Texan has learned new tricks and sharper ways of seeing things as his body ages. It’s made him enduringly pivotal to Seattle’s pursuit of hardware, a priceless player both on his own and in combination with his gifted teammates. Recent reports suggest that it’s also earned him a new contract from the Sounders. That’s a small triumph given how many observers speculated that last year’s Dempsey-less championship run had made him expendable.

The idea of calling only youngsters into the USMNT for the next four years is a tempting one. However, the prospect of fresh-faced up-and-comers competing with, and learning from, a true lion like Dempsey should strike a chord, too.

A momentous cup final rematch with USMNT teammates Michael Bradley and Jozy Altidore and the rest of their historically good TFC team may serve to tease out another dose of Dempsey’s best. Even if that’s by now a familiar sight to US fans, it should still be a welcome one.