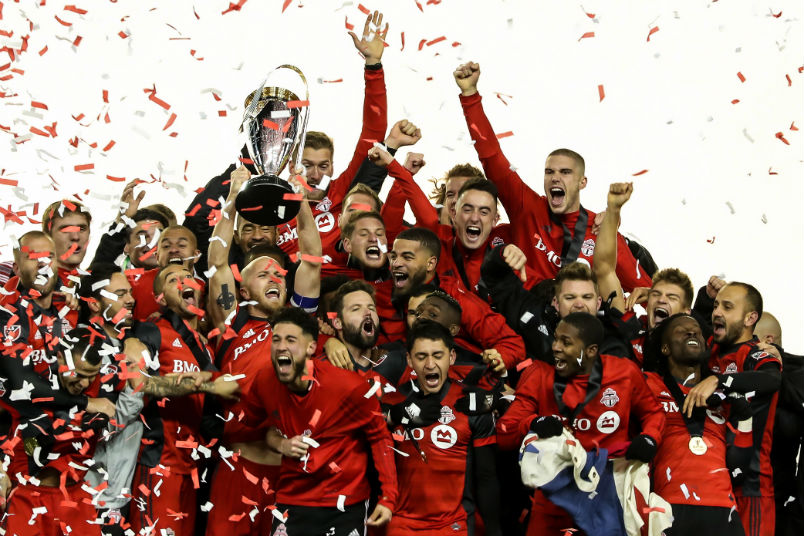 By Jason Davis – WASHINGTON DC (Dec 20, 2017) US Soccer Players – Toronto FC just made history over the course of the 2017 MLS season. Toronto became the first Canadian MLS team to life the MLS Cup, part of a triple haul of trophies. They also set the MLS record for most points earned in a season.

The Reds outscored every one over the course of 34 games while giving up the second fewest goals across both conferences. Toronto’s +37 goal differential was the second best the league had ever seen. Only a shootout-era LA Galaxy was better in that category. The quality and depth of TFC’s squad represents a high water mark in MLS history. It’s the result of increasing spending and committing to attracting a better level of talent.

Which is why Toronto FC is the best hope the league has had of breaking through on the international stage of the CONCACAF Champions League in a number of years. Toronto won every competition they entered in 2017. Their next stated goal is to win the Champions League and take this region’s ticket to the Club World Cup.

If TFC is going to end Mexico’s vice grip on North America’s top club competition, they’re going to have to earn it. No one suspected TFC (or any MLS team) would coast to a final. Monday night’s draw for the 2018 edition of the competition laid out a difficult path for the MLS champs.

CONCACAF changed things for 2018. MLS and Liga MX teams enter in the round of 16 now, likely facing each other by the quarterfinals. Since Toronto is the Canadian champion, they drew one of the four American MLS teams. They’ll face the Colorado Rapids, a ninth-place team in 2017 currently executing a change of head coaches with a roster in desperate need of a rebuild. The Rapids qualified for the CCL thanks to their point total in 2016.

A major impediment to MLS success in the Champions League has always been the timing of the knockout rounds of the tournament. The format change did nothing to fix that problem. Toronto does get the benefit of facing another MLS team who will be similarly situated in the preseason when the round of 16 games commence in February. For the other MLS team in the competition – New York Red Bulls, Seattle Sounders, and FC Dallas – there will be no such advantage. New York, Seattle, and FC Dallas are the favorites in their matchups, but the margin for error will be smaller.

Toronto’s prize for getting by the Rapids? A likely date with Tigres, Mexico’s biggest spenders and newly crowned champions of Apertura 2017. Like TFC in MLS, Tigres raised the bar in Mexico by capturing a European player in his prime when they brought over Andre-Pierre Gignac in 2015. The club has won three of six possible championships since the Apertura 2015 and are one of the region’s powers.

It’s not much better for any of the other MLS teams should they get to the quarterfinals. Seattle faces Santa Tecla of El Salvador in the Round of 16 ahead of a possible final eight showdown with Chivas. FC Dallas has Panamanian opposition in Tauro FC to start. If Dallas advances, they’ll likely face Club America. For the Red Bulls the challenge is beating CD Olimpia of Honduras. If they do, Club Tijuana could await them.

The was never going to be an easy path for any of the MLS clubs in the Champions League. Hoping for a good draw, or imagining a run to the title that didn’t go through the giants of Mexico wasn’t an option. There’s not going to be a run of upsets clearing out the Liga MX clubs in the round of 16. This is a tournament that is once again about MLS vs Liga MX, with the Mexican clubs the heavy favorites.

Since the change to the Champions League in 2008, MLS teams have made the final twice. Liga MX clubs have won all of the finals. Toronto FC proved to be one of the best MLS teams of all time. The smart pick remains on the Reds crashing out of the tournament before the championship round. That is also true for the rest of the MLS contingent. TFC’s quality and depth might not be enough to get them to the semifinals. There’s a better than good chance that FC Dallas, Seattle, and New York all meet the same fate.

There’s no shortcut to winning the Champions League for MLS. It’s the difficulty of winning in Mexico and the quality of Liga MX teams. MLS has committed more resources. More spending has resulted in more top-level players and a greater ability to fill the bench with solid reserves.

Toronto FC embodies that progress. With more spending power, they reached heights never before reached by an MLS team. However, that success came in MLS. The Champions League is a stiffer challenge, and achieving continental glory means overcoming a deficit of talent even with payrolls higher than ever before.

The Champions League is unkind to Toronto FC. It’s unkind to every MLS club because they’ll be forced to face Mexican opposition eventually. Until proven otherwise, we can’t expect much more than the status quo.