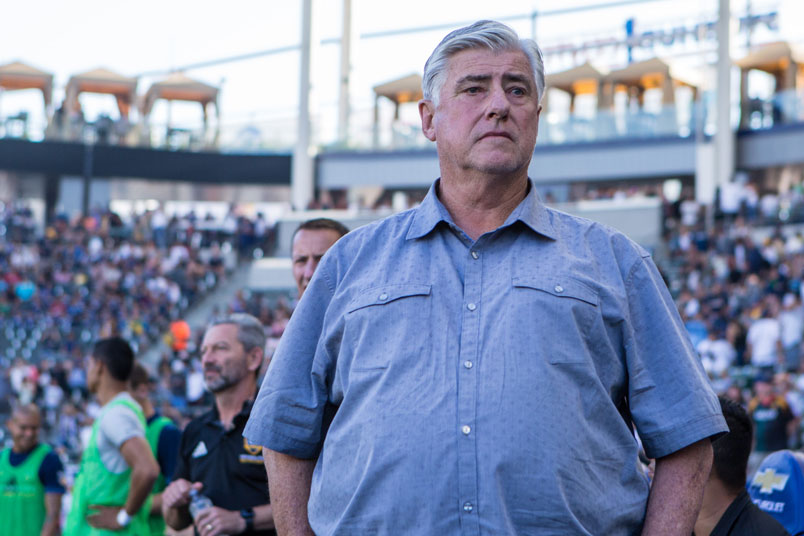 By Luis Bueno – RIVERSIDE, CA (Dec 6, 2017) US Soccer Players – The 2017 MLS season was a disaster for the LA Galaxy on many levels. The Galaxy was the worst team in the league, fired their head coach in July, and won a paltry three home games. Bad loss followed bad loss. In a season centered on player development, the Galaxy ended up horribly exposed. What happened to the club’s reputation for developing young talent?

Youth was not served last season. There’s no indication things will change. If 2017 taught us anything, it’s that the Galaxy doesn’t have the answer for how to develop players for this league.

Before the season, the club was ready to move forward with the youth. Players who had spent time with both LA Galaxy II and the Galaxy’s first team needed to play big roles. Players like Jose and Jaime Villarreal, Jack McBean, and Nathan Smith would get expanded roles contributing more to the team.

That’s how it went early on. McBean started the opener with Jose Villarreal coming on as a substitute. Smith and Jaime Villarreal were on the bench. Unfortunately for LA, that project stalled almost immediately. McBean played 18 games and scored twice in the same game. Smith and the Villarreal brothers played sparingly.

Curt Onalfo was their coach with LA Galaxy II. His promotion as Bruce Arena’s replacement was the direct link to the player development model. The indications were in place early on that turning Galaxy II into Galaxy I wasn’t working. That would cost Onalfo his job. He wouldn’t be the only one.. Once the season ended, the Galaxy bade farewell to five Homegrown Players – McBean, both Villarreal brothers, Smith, and Raul Mendiola, who played just 36 minutes with the first team this season.

All five were highly-touted prospects at one point. McBean joined the Galaxy at age 16. Onalfo compared Mendiola to Andy Najar when Mendiola was a budding prospect.

Also gone from the organization are LA Galaxy II players Alejandro Covarrubias, Ryo Fujii, Tyler Turner, and Robert Castellanos, all Homegrown Players. Covarrubias, 26, is LA Galaxy’s II all-time appearances leader and had been with the lower-division club from the beginning. Fujii graduated from the LA Galaxy Academy, the club’s corresponding high school program, and played in 58 matches over three years. Turner and Castellanos were draft picks from recent years. While the quartet was in positions to succeed, none of the four were able to take the next step within the club and ultimately the return in their investment yielded little to the organization.

Despite all the attention the club has placed on its academy and reserve team, the Galaxy has just three Homegrown Players on its roster now – Hugo Arellano, Bradford Jamieson IV, and Gyasi Zardes. The Galaxy has three players who made their impact on LA Galaxy II before moving up to the first team – defenders Dave Romney and Daniel Steres and forward Ari Lassiter. Although none are Homegrown Player, all are local and joined LA Galaxy II, found success there and moved up to the first team.

Still, the Galaxy seems set on returning to how things normally work in MLS. Sigi Schmid took over as coach and added the GM title. He brought in his son Kurt to as the club’s director of player personnel and scouting. Kurt Schmid held a similar role in Seattle, and is well thought of in MLS circles. Both father and son seem set to rebuild the club the old-fashioned way. Spend on foreign talent while bringing in tried-and-true MLS veterans. That is the best formula for trying to compete next year. Relying on youth to help carry the club forward would be a misguided approach.

What that means for the Galaxy’s developmental aims is a different issue. It’s one of approach. The Galaxy may not be able to put a timeframe on any of the youth players’ development and thus will have little in the form of expectations. Perhaps youngsters in the LA Galaxy’s system feel too much pressure knowing they are being pushed to fill spots once held by the likes of Donovan and David Beckham. That may doom them from the start.

Then there’s the competition. LAFC has a youth program already in place with players competing at young age groups. They’re still seven years or more from having a chance to contribute to the first team. The Galaxy cannot afford to give away players to LAFC at any point in the developmental process, especially when there’s the temptation to limit the focus on youth.

The expectations placed on the younger players and the youth system in general ahead of 2017 was too much. It did not help that the clubs star players had their own difficulties in 2017. Young players need stability, and that certainly wasn’t the LA Galaxy this season.

What the Galaxy can’t afford to do is once again rush the timeline. That’s their challenge not just for 2018, but moving forward long-term with player development.