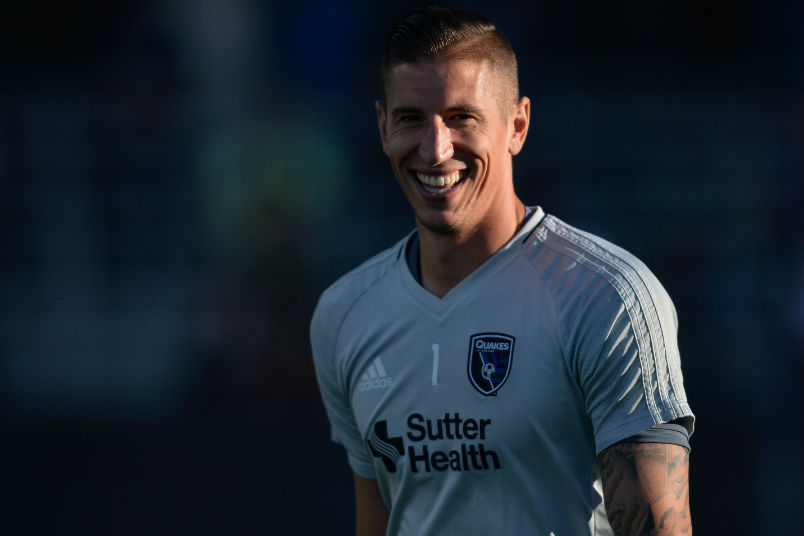 By Luis Bueno – RIVERSIDE, CA (Dec 20, 2017) US Soccer Players – Over the years, the LA Galaxy have had numerous standouts at many positions, from play makers to goal scorers to tough-as-nails defenders. It’s been awhile since goalkeeper was in that category. Not surprisingly, it was the goalkeeping that let the team down on many occasions during the tumultuous 2017 season.

Perhaps addressing their greatest need, the Galaxy started their offseason rebuild with goalkeeper an obvious question mark. That meant wiping the slate clean. Unfortunately for the Galaxy, so far it’s stayed clean.

The Galaxy hasn’t been able to acquire or reach terms with a potential starting goalkeeper, or any goalkeeper for that matter. It is a bit of a risky move, but the Galaxy apparently felt it necessary to make such a drastic change to the position.

LA’s offseason has been progressing along, with the club acquiring some notable players, mainly defenders Rolf Feltstcher from Cardiff City and Jorgen Skjelvik from Norwegian side Rosenberg. It is likely the two newcomers will comprise half of the starting defensive unit come 2018.

Who plays behind them is a mystery. The Galaxy has tried twice to acquire a first-choice keeper. So far, they haven’t been able to seal the deal. The club reportedly was unable to work out a trade for beleaguered Vancouver Whitecaps goalkeeper David Ousted. The issue was the league’s rules on finances and the Targeted Allocation Money (TAM) designation.

The Galaxy did make a trade for a goalkeeper though, acquiring the rights to ex-Quakes keeper David Bingham. The Galaxy gave up a total of $200,000 in allocation funds to acquire Bingham’s rights. However, Bingham has not yet signed with the club. Bingham is reportedly examining options abroad. The situation with the Galaxy though would be strong for him. Bingham would be an instant upgrade over the revolving door of goalkeepers the Galaxy had a year ago. He would also reunite with former head coach Dominic Kinnear, who is an assistant with the Galaxy.

So far, though, that has not happened. If Bingham departed for an Old World club or any club outside of MLS, the Galaxy would have paid a high price to acquire a player’s rights.

Perhaps the Galaxy felt it wise to place all of their hopes in Bingham. If he joins, he would be the best goalkeeper the Galaxy has had since Kevin Hartman. In the club’s early days, goalkeeping was a solid position because of Hartman’s abilities.

Since trading away Hartman in 2006, however, the Galaxy have had a cavalcade of goalkeepers. Standout Panamanian goalkeeper Jaime Penedo called the Galaxy home for two years and helped the club win MLS Cup 2014 but left due to a contract dispute the next season.

Throughout all of that turnover and mediocrity, though, the Galaxy won multiple MLS Cups. After Hartman’s two MLS Cup titles, the club’s entire roster went south. The club had to rebuild. In all places across the field, the club solidified itself. Josh Saunders was in goal for the Galaxy’s MLS Cup 2011 and 2012 wins but those teams are remembered for their tough defending and clutch goalscoring. Saunders was good enough to start then.

The Galaxy does not need good enough anymore. The club needs to break the decade-long stretch of uncertainty and so-so play at goal. A year ago, the team suffered across the board. The goalkeeping position was not immune to those ails. Brian Rowe started out the season in goal. Clement Diop and Jon Kempin saw ample playing time throughout the season. In fact, it was Diop who played the most, with 15 games played to Rowe’s 14 and Kempin’s 7. The goals allowed numbers though were ghastly for the trio. The club allowed 67 goals, second only to Minnesota’s 70. Each goalkeeper finished the season with two clean sheets.

Those players did not have problems finding employment elsewhere. Montreal nabbed Diop in the MLS Waiver Draft on December 13 while Columbus dealt for Kempin the same day, sending a fourth-round SuperDraft pick the Galaxy’s way for him. Rowe moved north. Vancouver traded its second-round selection in the 2018 SuperDraft for Rowe.

What LA wants right now is someone who will take the reins and bring some stability and leadership to the position. Clearly, the Galaxy feels Bingham can fill that role. Bingham, 28, was San Jose’s first-choice ‘keeper for the last three seasons and has played in three games with the USMNT. Were Bingham to sign with the Galaxy, he could easily be the club’s first-choice keeper well into the next decade.

However, if recent history has shown anything, it is that the Galaxy can win with average keepers or even instability in that position. The Galaxy has many other holes that need addressing. A striker capable of scoring 12-plus goals would be a great addition. As would depth at forward and defense. Mostly, the club needs players who can be leaders and help stabilize the locker room. A few MLS veterans could provide stability where it is needed the most.

Guiding the team out from the darkness that was 2017 into 2018 will be no easy feat. Getting a starting goalkeeper now would help move the offseason forward. It would also address the questions left there by a rocky 2017 season.