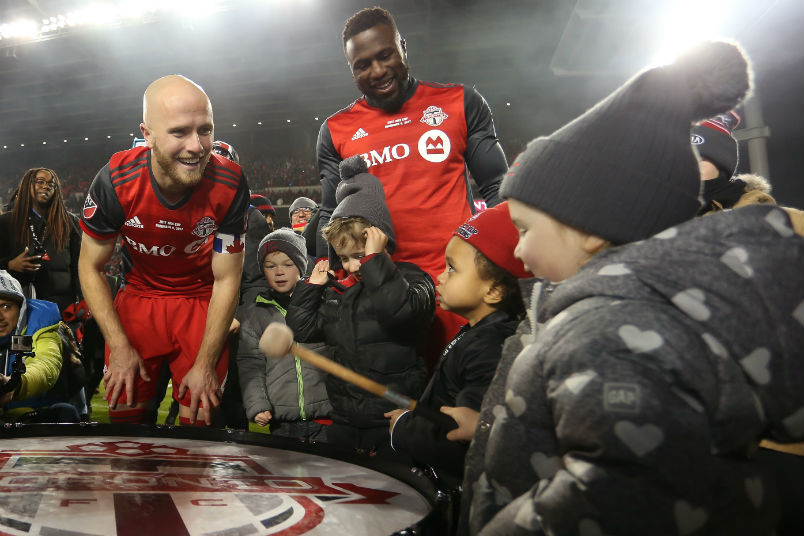 By Jason Davis – WASHINGTON DC (Dec 13, 2017) US Soccer Players – When Toronto FC joined Major League Soccer more than a decade ago, the league was only just launching into something that could be called the “modern era”. 2007 was the first year of the Designated Player rule, a groundbreaking step by MLS leadership that allowed clubs to sign high-priced players with famous pedigrees. Dick’s Sporting Goods Park opened in Colorado, bringing the number of soccer-specific stadiums across MLS to five, including Toronto’s own BMO Field. Toronto was the latest MLS team to join the league with vocal supporters already in place.

Off the field, the new club was a massive success. On the field, they were a disaster. Toronto won just six games, finishing at the bottom of the both the Eastern Conference and the combined league standings. Their -24 goal differential was the worst in MLS. It took them more than 383 minutes to score the first regular season goal in club history.

Finishing last in an expansion year was far from a shameful thing back in 2007. The problem for the Reds is that progress towards the playoff places and a chance at an MLS Cup was almost non-existent. From their inaugural year to 2014, Toronto never did better than fifth. They failed to make the postseason on every occasion. The best the club could do was a couple of near misses in 2009 and 2010, when they came in fifth at a time when the top four in each conference qualified. In those first eight seasons, six different permanent head coaches trod the sidelines. A new program—one that the club assured fans would finally bring glory—launched on what seemed an annual basis.

To be succinct, Toronto FC was a bad club run badly that played in a nice stadium in front of fans loyal despite rampant incompetence.

How things have changed.

Those loyal fans packed BMO Field to the rafters on Saturday, in greater numbers than even in the first years. A renovation raised the capacity of the stadium, adding a roof to the three main stands. BMO Field has a European feel to it now. It’s a proper stage for the loud, coordinated support that Toronto FC fans bring to the game.

Those fans played a significant role in the second consecutive MLS Cup to take place in their venue. After last year’s disappointment, the Reds’ fans brought their energy to the early stages of the game as their side took a stranglehold on the proceedings. TFC was so good over the course of the first 45 minutes that only the heroics of Stefan Frei in the Sounders goal prevented the home team from taking a multiple goal lead.

The lack of a lead at halftime elicited a nervous energy in the BMO Field faithful. As the second-half drifted and an hour of play came and went, fans could be heard wailing with distress at every turnover and misplaced pass. There’s no telling what the players themselves were thinking while looking for the breakthrough, but the emotion of the crowd was obvious. Even the blustery cold of a Toronto December night couldn’t mute the anxiety emanating from the stands.

The goal finally came in the 67th minute on a perfectly executed counter by Major League Soccer’s best team in 2017. After turning over the Sounders in their half, TFC strung together a series of one-touch passes the ended with Jozy Altidore chipping the ball expertly past Frei.

It meant catharsis at BMO Field. After 120 minutes of goalless soccer in last year’s loss and a dominant, but fruitless performance through two-thirds of a second final, a single goal and a lead was all it took to send the fans into rapture. Remember, the preeminence of TFC is a recent phenomenon. Many fans have clear memories of the worst days.

Toronto general manager Tim Bezbatchenko said on Friday that the malaise was “deep” when he arrived at the club in 2013. Pulling TFC out of that pit of despair required a new commitment to spending, yes. It also required smart use of the tools available to MLS teams to cobble together a roster capable of winning. Bezbatchenko not only achieved that feat, the assembled a group that set a new record for points in a season on their way to a triple haul of trophies.

MLS time is compressed, simply because the league is young in comparison to most of the world’s biggest sporting competitions. Toronto FC isn’t the Boston Red Sox pre-2004, the Chicago Cubs pre-2016, or the Cleveland Browns. They are a team that attracted a level of support unique in 2007 MLS and proceeded to cause that suffering for nearly a decade.

Toronto FC matters in Toronto in a way MLS teams often don’t in major cosmopolitan cities. A combination of factors means that the seventh largest metropolitan area in North America has embraced the club more than many American MLS fans might realize. Winners generally draw big crowds, but it’s a good bet that many of the people in the building on Saturday attended games during the lean times.

After so much pain and so much incompetence, those fans earned the right to go a bit crazy when Altidore scored. Whether it was worth the wait an individual matter, but there’s no doubt they enjoyed it.