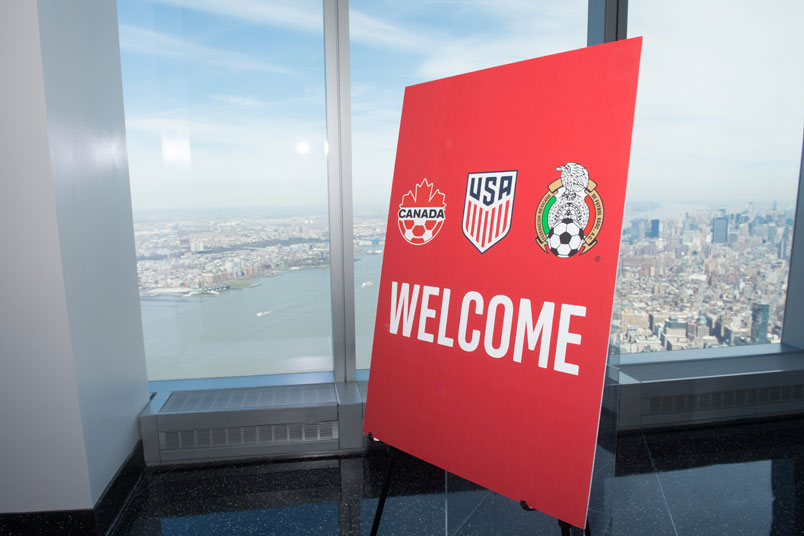 By Charles Boehm – WASHINGTON, DC (Dec 15, 2017) US Soccer Players – You’ve probably already heard about the US, Canada, and Mexico partnering to launch a sprawling bid to host the 2026 World Cup. The three nations have submitted an ambitious plan for the first edition of FIFA’s expanded 48-team tournament. They’ll find out in June whether the world’s favorite sporting event returns to North America for the first time since 1994.

The “United Bid Committee” briefed reporters on the status of their efforts a few hours before last week’s MLS Cup final in Toronto. Here’s a few points of interest to get you up to speed on the process.

The heads of the Canadian, Mexican, and US soccer federations are out front: Steven Reed, Decio de Maria, and Sunil Gulati, respectively. The nominal head of the pack is committee executive director John Kristick, a longtime soccer exec who’s worked on FIFA-related projects for decades. Kristich had a leadership role with the United States failed 2022 World Cup bid.

He leads a four-person “executive team” that reports to a 14-member board of directors highlighted by several heavyweight names, including retired US players Carlos Bocanegra and Julie Foudy.

Wondering about Gulati’s situation in light of his decision not to seek re-election as USSF president in February? That won’t have any bearing on his 2026 role. He’ll spearhead this process regardless. Based on his assertive statements at the press conference in Toronto, he’s no figurehead.

What are the specifics of the bid?

At present, 32 cities and metropolitan areas across the continent are in the bid package. 25 of those are in the United States, four in Canada, and three in Mexico. Those numbers will be trimmed down later in the process. For now, the organizers want to keep a “big tent” approach that gives all the contenders hope and maintains a broad base of support and interest.

“Our goal is absolutely to include as many as we can because the final decision on whether the World Cup is played at 12, 14, 16 venues, that won’t be taken until sometime in 2021. So we have a lot of time to continue to raise the awareness,” said Kristick in Toronto, emphasizing a “spread the wealth” mentality. “There’s no city in our bid that’s not capable to host a World Cup.”

As of now, the bid is based on existing stadiums and training complexes. However, that can change with new facilities opening over the next few years. No new stadiums will be built specifically for World Cup 2026, a reflection of the region’s strong existing sports infrastructure that the committee hopes will make their bid more appealing. Many of the proposed venues are NFL stadiums.

“We can focus on building the game, not stadiums,” said Kristick, noting that FIFA has said it favors existing stadiums over new builds, mindful of the costly “white elephants” that have marred the legacies of past tournaments.

Canada and Mexico are slated to host 10 games each, with the rest in the United States. FIFA’s members will vote on 2026 hosting rights in mid-June 2018, with the four bidding nations excluded from voting. FIFA officials will tour the venues this spring.

Why are Canada and Mexico getting so few games?

It’s the USA in the driver’s seat here. This country has a far larger population than its neighbors, and more wealth, infrastructure, and media heft to mobilize. Canada and Mexico are along for the ride, cognizant of how difficult it would be for either or even both together to compete against the Americans.

“The joint bid is much more compelling than if any one country tried to do it on their own,” said Canada’s Reed. “The fact that we’re getting 10 matches out of the 80 I think is really exciting for Canadians across the country. The reality is, we would’ve been hard-pressed to go it alone with a 48-country competition. I think we should really be pleased.”

So this united bid is the product of a desire to project cooperation and friendship, both figurative and literal. The bid committee hopes it sends a positive message to FIFA and the world, while also building its economies of scale.

“We’ve always had a very special relationship with these two federations,” said Gulati. “They’ve been partners for a long time, and the countries have been partners… so the message that hopefully this sends about relationships and international issues is extraordinarily important.”

Proud of their rich soccer culture and rare history of hosting two prior World Cups (1970 and 1986), many Mexicans have scorned their modest role in the 2026 bid, as de Maria dryly acknowledged in Toronto.

“Thirty seconds after I said Mexico is going to get 10 games, my mother was very famous,” he said, sparking waves of laughter in the hotel conference room.

“Hopefully if we get the blessing from FIFA to organize this, at the end of the World Cup in ‘26, I’m going to find people in the street that are saying bad words to me, saying ‘why 10?’ But there are going to be 95 percent saying ‘thanks, we had the third World Cup in Mexico, we enjoyed it, we showed the world that we can do it together, we sent a clear message to the world that half a billion people for once got together, understand each other and opened their arms to receive the rest of the world.’ But the number 10 is going to follow me for the rest of my life.”

Short answer: No, but no promises.

“At this stage the requirements are natural grass,” said Gulati. “But this tournament is a long way away, and given the improvements that are happening all the time in artificial [turf], we don’t want to predict. But as of now they’d be on natural grass. That’s certainly the expectation that we have.”

Many American soccer fans are still smarting over FIFA’s stunning decision to award World Cup 2022 to Qatar instead of the States. That decision has skirted controversy and corruption allegations ever since.

This is officially a two-horse race for 2026. Morocco is the only other bidder, the North Africans making their fifth attempt to host the big event.

On paper, it might look like a mismatch: A nation of some 34 million about the size of California with their own societal issues. After Qatar, nobody is taking things for granted when it comes to FIFA. Suspended former FIFA boss Sepp Blatter has already voiced support of Morocco’s bid while criticizing the North Americans.

“This isn’t going to be a computer-generated program that spits out an answer of what the best bid is,” said Gulati in Toronto. “So we’ve got to campaign. There’s [207] countries that get to vote on this.”

Expect to hear the figure 104 a lot over the next few months. That’s the simple majority of votes the winning bid will need.

What about FIFA’s issues?

It’s up for debate whether the organization has truly corrected its culture of corruption. The united bid committee insists that it closely evaluated the reformed bid process and feel comfortable with its levels of transparency and regulation.

“We wanted to see what the rules would be, and we’ve seen those – and some of those included restrictions on behavior of bidders; we’re glad those are in place,” said Gulati. “One of those was a public vote announced at conclusion, and that’s in the rules. And the number of checks that FIFA has put in on compliance, both internal compliance – we’ve had to hire an outside law firm that we pay to watch our own compliance – and John’s just come back from meetings with FIFA and throughout those meetings FIFA had outside compliance people to monitor. we’re essentially not allowed to have conversations anywhere with FIFA voters unless we document them and report them to FIFA. So we are fully confident that this is a far better process than FIFA’s ever had before, and that’s why we’re in.”

Added Kristick: “FIFA knows that the spotlight is shining very, very bright…. I feel much better about where we’re at for this process going forward than, certainly, the last one.”

What about fans having to cover all of North America?

This topic came up at the press conference. Gulati contended that despite the enormous distances between many proposed host cities, smart scheduling could make 2026 a less strenuous experience for fans than Brazil 2014 and Russia 2018.

“When you’ve got more teams and more venues, it’s easier to place groups,” he said. “Imagine a group, just for the purposes of discussion, in Seattle and Vancouver that’s following a team for three games. That would be a pretty easy trip, whereas traveling from Manaus to Rio [de Janeiro] wasn’t quite as straightforward. That’s part of it, air transportation is better. We think there’s a way to put the schedule together that minimizes that.”