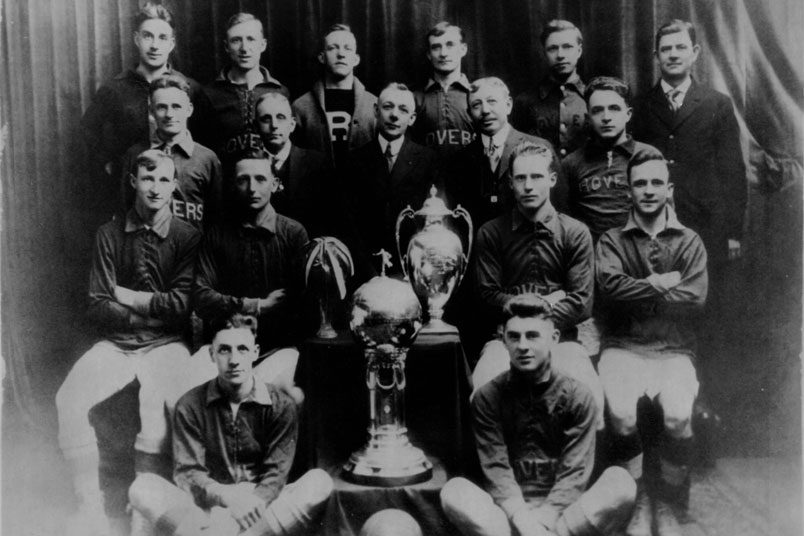 By Clemente Lisi – NEW YORK, NY (Jan 8, 2018) US Soccer Players – It’s difficult to imagine today, but Fall River, a town with a modern-day population of just 88,000, was once one of the hotbeds of American soccer. Once a center of textile manufacturing, Fall River was home to many Scottish, and, in years later, Portuguese immigrants. They brought their love of the game to our shores. Located about an hour outside Boston, the men who played in Fall River – and for a team called the Rovers – would help grow the game during the early part of the 20th century.

Throughout the 1880s, Fall River became a bustling municipality. It had a population of about 20,000 and attracted European immigrants in search of jobs. Along with Kearney, NJ and St Louis, Fall River became one of this country’s soccer strongholds. A vibrant economy, fueled by a burgeoning textile industry, gave the place the nickname “Spindle City.” The result was a steady stream of Scottish immigrants, primarily from Glasgow. Following a meeting in February 1884 among a group of soccer enthusiasts Fall River Rovers FC was founded.

The Rovers became a powerhouse in the late 1880s. They won back-to-back trophies in 1888 and 1889. In 1891, The Rovers, as well as the Fall River Olympics, Pawtucket Free Wanderers, and East Enders separated to form the New England League. The Rovers won the American Cup in 1907 and were crowned league champions two years later. The team switched leagues several times in the ensuing years, including playing in the Eastern Soccer League (in 1910, the only year the league operated) and the Southern New England Soccer League (1910-1921). Although they never won the league title (the Rovers finished runners-up in 1917 and 1921), the team did capture the league cup, known as the Times Cup, in 1917. The SNESL was one of five regional leagues operating in the country at the time.

The Rovers featured several star players. The biggest was striker Thomas Swords, who in 1916 captained the US National Team in its first official match against Sweden. Swords would go on to make just two official appearances for the United States in an era where internationals were still a novelty. He had two long stints with the Rovers from 1904-09 and a second from 1914-20. Goalkeeper Chick Albin, who started in net for the team in three US Open Cup finals, played for the Rovers from 1915 to 1922.

The team also exerted its national dominance by winning two straight US Open Cups – the 1916-17 and 1917-18 editions – both against the Bethlehem Steel, considered one of the most talented teams in the country. Bethlehem had defeated the Rovers in the 1916 final in a game that pitted two of the country’s two biggest industrial centers. The Rovers, a team made up primarily of American players, ultimately got the best of them in the ensuing years. For the Rovers and its fans, it was sweet revenge for the defeat in the 1916 final played at Coats Field in Pawtucket, Rhode Island.

The tense rivalry was also not immune to violence. Steel relied heavily on players from Scotland and the 1916 US Open Cup final attracted 10,000 fans to Pawtucket. The 1916-1917 edition of Spalding’s Official Soccer/Foot Ball Guide reported: “The fans came to Pawtucket from all parts of New England by autos, train, and electric cars, and soon they created a jam at the box offices so great that hundreds clambered over the fence, not so much to evade fare as to get a vantage point before the best seats were gone. The gatemen found it impossible to keep pace with the rush and a good many dollars strayed away from the USFA coffers because of the unpreparedness.”

With the large crowd made up of mostly Rovers supporter, a penalty kick awarded to Steel in the 80th minute ignited a fracas in the stands. Tommy “Whitey” Fleming converted and Steel lifted the trophy. That call – along with a penalty kick denied to Rovers by referee David M. Whyte in the game’s dying seconds after a Steel handball – led to a field invasion and violence between fans.

The Bethlehem Globe reported, “Even as he did he was struck in the back by a fan who had been in the lead in the wild rush at the referee. His failure to call what the Rovers thought was a penalty kick for their team seemed the last straw … The Pawtucket police headed by Lt. DA Ballou drew their clubs and rushed to the assistance of the players who were doing their best to protect the referee, especially (Fall River defender Frank) Booth who was beaten black and blue. Bottles began to fly and the tumult didn’t cease until one of the officers drew his revolver.”

In 1922, the SNESL and the powerful National Association Football Leaguer merged to form the American Soccer League, effectively creating this country’s first national soccer league. As a result, the Rovers were disbanded and a new team called Fall River United was formed. The team played in the 1921-22 season, finishing sixth out of eight during the inaugural ASL season. A new owner renamed the team the Fall River Marksman and the club played until 1931. The Rovers name was revived one last time, during the 1933-34 ASL season.