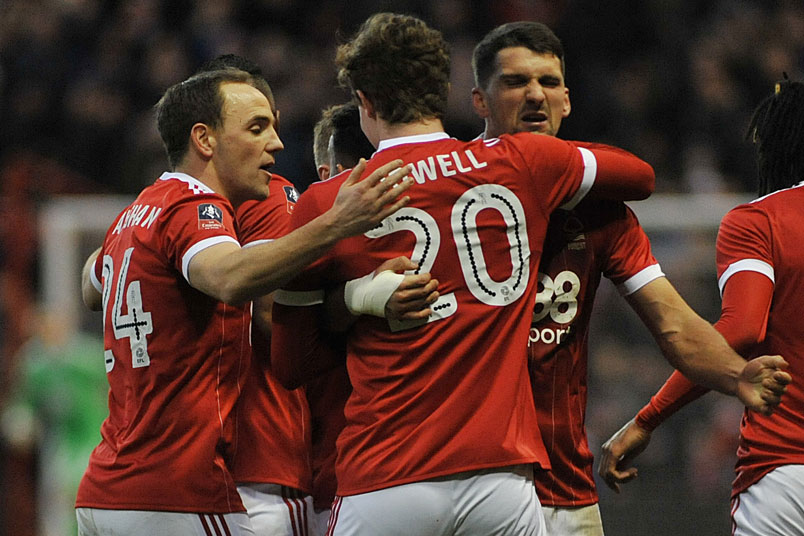 By J Hutcherson (Jan 9, 2018) US Soccer Players – Credit USMNT player Eric Lichaj for adding something extra to the Third Round of the FA Cup. Lichaj’s two-goal performance in Nottingham Forest’s win over Arsenal wasn’t enough. As he told the broadcast team following the game, he needed a hat-trick to convince his wife that their house needs a dog. He tried his best, asking to take a penalty in pursuit of that puppy goal.

That’s the magic of the FA Cup, not just an upset but a feelgood story from the player that made a difference in that upset. Arsenal goes out, another issue in another season sure to be full of them. Forest moves on, away to Hull City in the Fourth Round where a win wouldn’t necessarily be an upset. That’s how the FA Cup works, dropping in the Premier League and Championship clubs in the Third Round and letting the draw do the rest.

Forest returns to Championship play under a new manager, with former Middlesbrough manager Aitor Karanka taking over. The Karanka era immediately follows what could be the biggest game Nottingham Forest plays this season, another quirk of the cup schedule. Though nobody would confuse them with a club only interested in cup runs, a team in Nottingham Forest’s decidedly mid-tier position will take what they can get this season.

“Our objective is clear,” chairman Nicholas Randall said in a press statement announcing the Karanka hire. “We want to continue building this fantastic football club and lead it to a bright future. The wonderful supporters of the club deserve success and a return to the Premier League. We are all working hard off the pitch to achieve this goal and we believe that Aitor will ensure that we can get the job done on the field of play. I want to thank (caretaker manager) Gary Brazil, his staff and the players for their professionalism and loyalty in the last few days. In particular, the performance against Arsenal was truly outstanding and shows the potential of this fantastic club.”

That’s always the problem with the magic of the FA Cup. Parsing meaning from a one-off game in a knockout competition is rarely straightforward. It requires focusing on the opposition as well as yourself. That’s especially true if that opposition is in the top half of the league above you.

“It would have been foolish to play the game Arsenal wanted us to so we had to go on the front foot and get in amongst them,” Brazil said. “We didn’t want to give them space or time on the ball or allow them to dictate the game. Our first ten minutes showed our intent and we really set the tempo of the contest. I thought our senior players, Eric, Mance, Armand and Vaughany led by example today and the younger players then followed suit. They gave us a platform to go and build on and allowed us to put in a really strong performance against a very good team.”

Certainly a better team than Forest plays in the Championship, but again there are caveats. The FA Cup has become a byword for squad rotation and trouble for the bigger Premier League clubs. Their focus is elsewhere, even when they go through to the later rounds of the competition. Arsenal plays Chelsea in the semifinals of the League Cup with the opening-leg on Wednesday. The opponent changes things, turning a competition that’s a respectable fourth on both of those teams’ list of priorities into something more. Well, at least in theory.

It would take a lot for any elite manager to convince people that the priority is the League Cup. Not at any point in recent memory. The other side of the bracket is Manchester City vs Bristol City, with the Manchester club surprised at their performance in the quarterfinal round.

Squad rotation concerns, priorities, and the other team playing their game of the season is the reality for the cup competitions in England. That’s the game, different from the league or the European schedule. That applies to the underdogs as well as the favorites.

Nottingham Forest moves on in the FA Cup needing to adjust to a new manager and what’s a trickier Fourth Round. Hull City is seven places down the table from Forest, already in a fight to avoid successive relegations. They’ve gotten no traction in the Championship, Nottingham Forest beat them 3-2 at KCOM Stadium on October 28, one of a dozen losses to go with nine draws. Forest has 14 league losses, but ten wins to keep them in 14th-place in the 24-team league.

That might be what’s really magical about the FA Cup, a competition so ingrained in the sporting culture that there aren’t any excuses. The strongest teams know that this is a tournament that doesn’t necessarily play to that. The underdogs may end up favorites in a later round. It’s a breaking of assumptions about domestic soccer even if it still carries with it the same excuses.