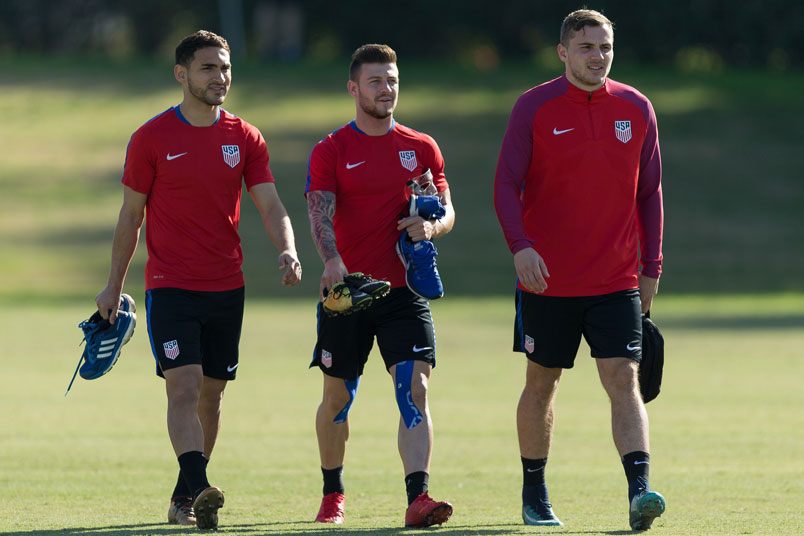 By Clemente Lisi – NEW YORK, NY (Jan 15, 2018) US Soccer Players – A new year means a new start for the USMNT. 2018 is about the USMNT building on the positives and moving on from last year. A roster loaded with up-and-coming young players is together in Carson, California kicking off a transitional year for the USMNT.

January is always a time to see new faces and this year is no different. USMNT interim coach Dave Sarachan, longtime assistant to Bruce Arena with loads of MLS experience working with young players, will weigh his options over the next two weeks. This group of mostly-MLS players prepare to put all that work into use during the first game of the year on January 28 against Bosnia and Herzegovina. That game at StubHub Center is the first in a series of key friendlies this year.

“Obviously, this is a unique January camp in that we’re solely preparing for the future and to give opportunity to players that have a future in the program,” Sarachan told USSoccer.com last week. “We didn’t bring in a lot of the veteran players for that reason.”

There are competitive games on the 2018 schedule with the CONCACAF League of Nations, a chance for the USMNT to use this year to lay the groundwork for the future. It will mean reenergizing the veterans and finding the right youth players and give them playing time and experience. Despite a series of unknowns (such as who will be US Soccer president and who will be named head coach), here’s how this camp looks regarding goalkeepers, defenders and midfield/attack.

This is a country that has a tradition of producing quality goalkeepers. The focus now is who will be that next quality goalkeeper to emerge for the USMNT. Bill Hamid is one of four goalies called into camp and the front runner to get the start for the US later this month. He already has four caps. The three other goalkeepers, Toronto FC’s Alex Bono, New England’s Cody Cropper, and the Columbus Crew’s Zack Steffen, have yet to appear for the USMNT.

Hamid could very well become this team’s third-choice goalkeeper behind Tim Howard or Brad Guzan, a position various players have auditioned for in the past few years. This list of contenders, however, is a formidable one. All have excelled at some level in MLS. Standing out most is Steffen. At age 22, he had a great run of form in the MLS Cup playoffs last season. Steffen is young enough where he will be around for at least another decade to 15 years given the career longevity of goalkeepers.

Any of these ‘keepers could easily become a starter for the USMNT when competitive games roll around. The January camp will allow these players to renew their fitness levels as well as practice and learn from one another. Friendlies are a time for Sarachan, and whoever is head coach down the line, to test players and get them some valuable minutes. Even for a country with a strong pedigree for producing world-class goalkeepers, there is nothing the USMNT should take for granted when it comes to nurturing young talent.

After just one season in the pros and call-ups for the USMNT at the 2013 FIFA U-20 World Cup, DeAndre Yedlin was part of the January camp in 2014. He ultimately made the World Cup roster for Brazil 2014, and the rest is, as they say, history.

Yedlin’s story illustrates how important January camp can be and the potential there is in these annual get-togethers. Is there a future Yedlin among the group of nine defenders currently in camp? That’s the question.

All of these callups certainly have the potential. The pair of Real Salt Lake players – Danny Acosta and Justen Glad – are both looking for their first caps. There’s also Sporting Kansas City’s Ike Opara and Chicago Fire’s Matt Polster who are also uncapped and could figure sometime down the road.

Toronto FC’s Justin Morrow, who has three caps, is part of the reason why the Canadian club is now in the conversation as one of the best MLS teams in history. Morrow finished second in the running for 2017 MLS Defender of the Year (losing to Opara) and as a wing back scored eight goals last season. He adds flair to the attack and stability in the back on the left. This could be the camp that puts Morrow into the USMNT fold going forward.

The question isn’t whether Clint Dempsey will return to the roster, but in what capacity. This camp will shed very little light on this question, but can certainly help Sarachan look at other options in the middle of the park and the attacking third. This is where any team wants depth, both in midfield and on the wings. It’s no coincidence that the roster’s vets play in these positions.

LA Galaxy winger Gyasi Zardes at 37 caps is the most-seasoned player in camp, followed by New England striker Juan Agudelo with 27, Seattle Sounders forward Jordan Morris at 24, and DC United midfielder Paul Arriola at 15. This camp won’t feature either Dempsey or Michael Bradley, but it will create options off the bench down the line. That’s what past January camps have often been about, and this one won’t be any different.

Dom Dwyer, who became a US citizen last year, was also called into camp but forced to withdraw last week because of a hamstring injury. This is a camp loaded with young players, many of whom shined for the USMNT at last year’s U-17 and U-20 World Cups. The aim is to keep developing these players at youth level so that they can be integrated into the senior team.

The talent pool is pretty deep in this part of the field. Along with Christian Pulisic and Weston McKennie, both just 19 years old, and 22-year-old Kellyn Acosta (all of whom are not in this camp), there are lots of talented young players for Sarachan to work with in person this month. One pair of midfielders to look especially close at are New York Red Bulls Tyler Adams and Toronto FC’s Marky Delgado. Long overlooked Minnesota United striker Christian Ramirez, meanwhile, gets some attention this month. He’s a talent that will come into better focus over the next few weeks.

All Sarachan can do is look at the players he has right now, not the ones he doesn’t. With that in mind, there’s plenty of talent to be excited about on this roster.