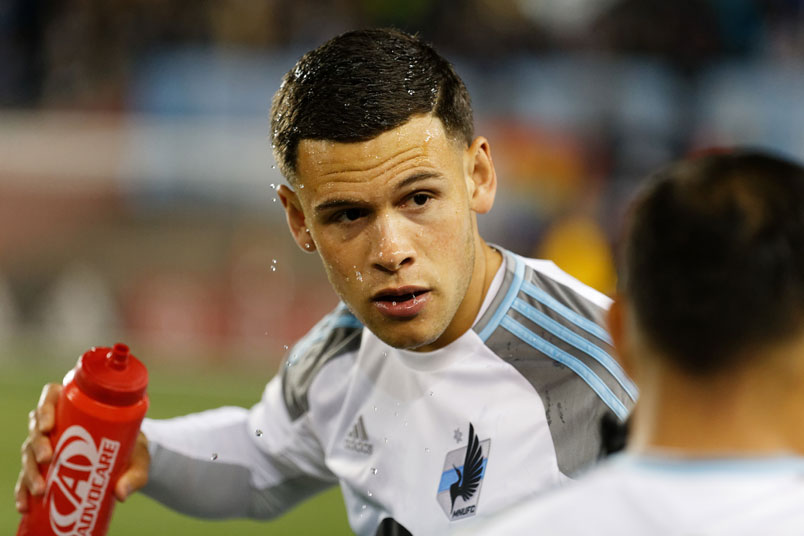 By Jeff Rueter – SAINT PAUL, MN (Jan 11, 2018) US Soccer Players – It’s safe to say that Christian Ramirez has had to earn every opportunity he’s gotten in his career thus far. The son of two Colombian immigrants, Ramirez was born in California and spent ages one through seven in Colombia, the oldest of four kids. His family settled into a two-bedroom apartment, dreaming of finding a better opportunity in the United States.

Despite earning a scholarship at UC-Santa Barbara, Ramirez transferred to Concordia University in California to get more minutes. Ramirez broke out by scoring 41 goals in two years at the NAIA school. Still, the professional calls weren’t coming. Despite two MLS trials, Ramirez left college without a secure club option. He impressed in a tryout with the Charlotte Eagles, earning a $500 signing bonus with the USL side in 2013. It was enough to catch the eye of Minnesota United, then in the NASL, who signed the striker to serve as the understudy to Pablo Campos.

The rest, as they say, is history.

After winning the 2014 NASL Golden Boot and forming a lethal partnership with Miguel Ibarra, Ramirez became the hipster’s choice as a potential USMNT strike option. Jurgen Klinsmann even sent scouts to watch Ramirez, though they ended up recommending Ibarra.

Ibarra earned his first cap while Ramirez continued to round out his game. Over the next two years, he went from being an outright poacher to improving his timing and increasing his upper-body strength. Despite scoring 51 goals across three NASL campaigns and receiving offers from numerous Liga MX sides, Ramirez still had detractors about his chances in Major League Soccer.

It didn’t take long for Ramirez to silence those who doubted him. He scored the club’s first MLS goal, coming on as a substitute in their first match, and became the first-choice starter every match he was healthy. As the goals kept flowing (14 of them, to be exact), Ramirez celebrated most with his trademark celebration: waving a cupped hand around his ear, symbolic of silencing his critics.

He may as well have been holding up a sign that read “why not me?” as well. While Bobby Wood, Jozy Altidore, and Clint Dempsey had their call-ups etched in stone when healthy, the fourth striker slot for the US was a revolving door in 2017. Jordan Morris came and went as his form fluctuated, and Chris Wondolowski served as a regular veteran presence. Dom Dwyer got a chance as soon as he was eligible. CJ Sapong and Juan Agudelo made returns after extended absences from the program.

It’s easy to argue that the biggest snub among the forward pool was Ramirez. Since January 2014, he’s scored 65 league goals. That’s higher output than any US striker, no matter the league. He added some final-third passing to his game, including one particularly silky assist to longtime best friend Ibarra.

Finally, Ramirez earned his first call-up this week for the USMNT’s January camp. With Dwyer’s absence due to a hamstring injury, Ramirez will be competing with Agudelo, Morris, Sapong, and one-time prospect Rubio Rubin for minutes against Bosnia and Herzegovina. January camps are prime opportunities for players to breakthrough, meaning Rubin and Ramirez may be increasingly likely to get a runout in the friendly.

After his climb up the US soccer ladder, it’s a certainty that Ramirez won’t coast through this camp. Even as the goals were freely flowing this summer, he was one of the hardest workers in training for Minnesota United. Every time a USMNT camp roster was released, fans’ eyes zeroed in trying to find Ramirez (or, as he’s known by the Loons faithful, “Superman”) among the call-ups. While he was a snub all through 2017, he continued to state that representing the USA was a lifelong dream of his.

Now, the 26-year-old will have his dream actualized with a USMNT program in transition. Each cycle, there’s been a place for a veteran who has a nose for goal. Wondolowski, Alan Gordon, and Herculez Gomez are recent examples of this archetype. With his knack for scoring, improved hold-up play, and his tireless work ethic, there’s plenty of reason to believe this is the first of many call-ups for Christian Ramirez.