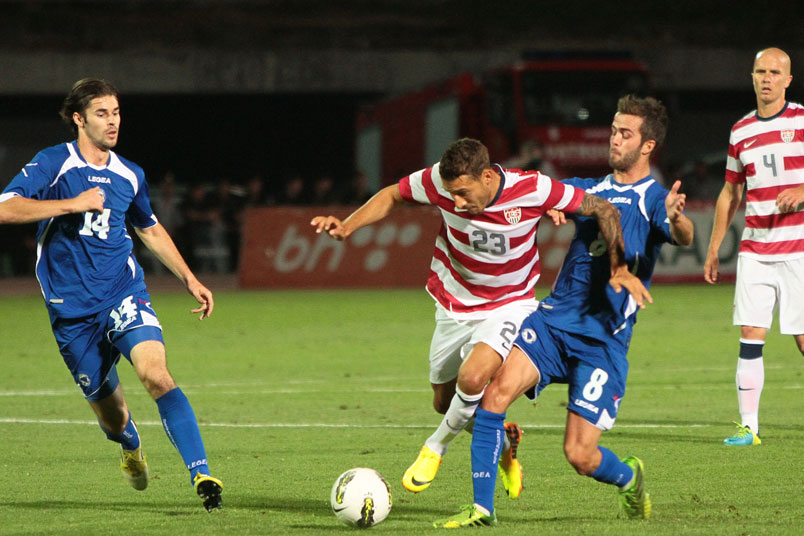 By Clemente Lisi – NEW YORK, NY (Jan 22, 2018) US Soccer Players – The USMNT plays its first game of the year against Bosnia and Herzegovina. A part of the former Yugoslavia, the now-independent nation has a long sports history. The capital city of Sarajevo hosted the 1984 Winter Olympics, only to be engulfed in a brutally violent civil war less than a decade later that resulted in its independence.

Amid the ethnic tensions, Yugoslavia eventually split into six separate nations by the mid-1990s – Serbia, Montenegro (which split from Serbia in 2006), Croatia, Slovenia, Macedonia, and Bosnia-Herzegovina. Yugoslavia had a proud soccer history. It reached the semifinals of the 1930 World Cup and finished fourth at the 1962 edition. They were also twice runners-up at the European Championship in 1960 and ’68. The country succeeded at youth level by winning the 1978 Under-21 European Championship and 1987 World Youth Championship. They also reached the pinnacle of club level success when Red Star Belgrade won the European Cup in 1991.

The United States has a history of playing nations that emerged from the former Yugoslav republic. Many of those matches have become memorable – such as the 2010 World Cup clash against Slovenia – while others have faded away into the archives. Nonetheless, many of these games marked an important milestone in this country’s soccer history.

The connections don’t end there. One of this country’s most-successful National Team coaches of the last 30 years was Bora Milutinovic, a Serbian-born former player. He guided the United States to a second-round berth at the 1994 World Cup. Another connection to Serbia was former US international Preki. Born in Serbia, Preki became both an indoor as well as MLS star before taking US citizen and earning 28 caps for his adopted country.

With the USMNT scheduled to play Bosnia and Herzegovina this coming Sunday at StubHub Center in Carson, California, here are five memorable matches from the past against teams that were once a part of Yugoslavia:

As tensions started to flare in the Balkans and Yugoslavia doing away with one-party rule, Croatia split off from the rest of the country and decided to field its own National Team in 1990. The USMNT, already on a European tour, was scheduled to play Poland when Croatian businessman Jure Klaric put down the $90,000 needed for the Americans to subsequently travel to Zagreb to play Croatia in its first-ever friendly. The game took place on October 17 at Maksimir Stadium in Zagreb before 30,000 fans.

Croatia won, 2-1. The lone American goal came via Troy Dayak 10 minutes from time with the USMNT already down two goals. Dayak had come on after halftime for Paul Krumpe. The American lineup that evening, put together by coach Bob Gansler, featured many of the same players who had been part of the World Cup just a few months earlier: Tony Meola in goal, Marcelo Balboa anchoring the defense and the frontline of Peter Vermes and Bruce Murray. The game also marked the debut of the now-iconic Croatian team’s red-and-white checkered jersey.

The USMNT hosted Macedonia on May 16 at Spartan Stadium in San Jose before 24,000 fans. The Americans, coached at the time by Steve Sampson, featured Kasey Keller in goal and Brian McBride (substituted in the 63rd minute by Roy Wegerle) upfront. The lineup also included Tab Ramos (who was subbed out for Preki in the 60th minute) as well as Cobi Jones. Even with all that talent, the Americans were shutout that day. The story before the game was the players Sampson could not play, all due to injury, including Eric Wynalda, Earnie Stewart, and Claudio Reyna.

The friendly, in preparation for the 1998 World Cup finals in France, was supposed to get the Americans better acquainted with a team that was similar in style to Yugoslavia, fielding a National Team at the time made up primarily of Serbians. The match against Macedonia ended 0-0, with the Americans squandering six very good scoring opportunities.

The 2010 World Cup in South Africa would help soccer reach new heights of popularity in this country as well as feature some epic matches. One of those games was the USMNT’s 2-2 draw with Slovenia on June 18 in the second match of the first round. The game was not without controversy. Bob Bradley’s men, down 2-0 at halftime, played their hearts out in the second half. The result was a comeback that nearly resulted in a victory amid chants of “U-S-A, U-S-A” that rang out at Ellis Park in Johannesburg that evening.

While the draw kept the team’s hopes of advancing to the second round alive, it was a disallowed goal scored by Maurice Edu with just four minutes left in the game that made headlines. The decision by referee Koman Coulibaly of Mali didn’t make much sense. There was never an official reason for the decision. USMNT player Landon Donovan, speaking to reporters after the game, said: “I don’t know how much English (the referee) speaks, but we asked him numerous times in a non-confrontational manner to explain his call but he just ignored us – or maybe he just didn’t understand.”

The USMNT lined up against Bosnia and Herzegovina for a friendly in Sarajevo on August 14 in their first-ever meeting. By the time the game was over, Jozy Altidore had set several records. In a game the US won 4-3, Altidore recorded his second consecutive career hat-trick and became the first American player to score a goal in five straight matches.

Down 2-0 at the half, the US rallied in the final 45 minutes. The game also marked the USMNT debuts of John Brooks, Bobby Wood, and Aron Johannsson, an American raised in Iceland who was persuaded by then-US coach Jurgen Klinsmann to play for his native country. It was another striker, however, who made the difference before 24,000 fans at Asim Ferhatovic Hase Stadium. Altidore’s three goals – in the 59th, 84th and 86th minutes – propelled the USMNT to victory. For the USMNT, this was the first-ever come-from-behind win on European soil.

Last January 29, the USMNT took on Serbia at Qualcomm Stadium in San Diego before a crowd of nearly 21,000. The match ended scoreless as the Americans could only manage one shot on goal. Bruce Arena had experimented with Graham Zusi as right back and Greg Garza on the left, an overall positive experiment. The US backline did a solid job of keeping the Serbian attack at bay.

Darlington Nagbe had one of his strongest games in a USMNT jersey, coming close twice in the first-half. In goal, Nick Rimando got the shutout with a pair of saves, both in the second-half, to preserve the draw. The game also marked Altidore’s 100th cap.