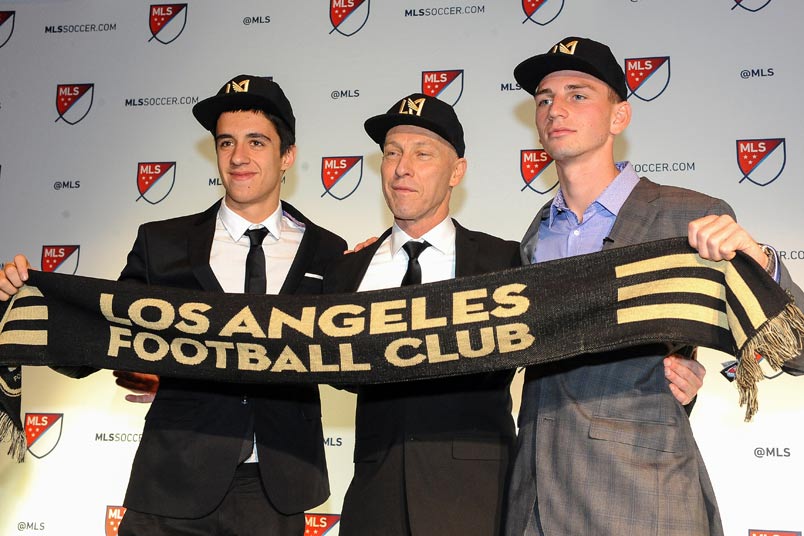 By Luis Bueno – RIVERSIDE, CA (Jan 24, 2018) US Soccer Players – Before the start of training camp, LAFC announced its first-ever coaching staff. Bob Bradley took the head coaching job last year, but the rest of the staff waited for January. Among his hires were Ante Razov and Zak Abdel, both formerly of Chivas USA. Bradley, who had played an integral role in the club’s early days, brought back two members of the now-defunct outfit to help guide LAFC.

Perhaps in some circles, fear permeated. If this is what the new club is like from the start, it may look a lot like the old one. Maybe, as Chivas USA supporters clung to in their final season, the dead really do inherit the city.

It only took until the start of training camp, though, for any concerns to subside. After one day, Los Angeles became a true two-team town. The fledgling rivalry began to take shape and showed that this 2.0 version of the LA derby is much more real than the old one ever could have hoped to have been.

The old version was never any of that. Chivas USA was always in the Galaxy’s shadow. Training at the same facilities always meant that Chivas would be unable to escape that tag. Only winning helped some of that fade away. When the winning days of 2006-09 stopped, for the most part so did Chivas USA.

LAFC is not the second coming of Chivas USA. LAFC is training on the campus of UCLA, some 25 miles northwest of StubHub Center, or about 45-60 minutes away in LA traffic. That is a stark contrast to the five-minute walk it used to take to get from Galaxy training to Chivas USA training.

Perhaps the biggest difference with LA’s second team was the lack of questions and focus on LA’s first team. The interest surrounding LAFC is there because of what the team can offer and not how it will compete with the Galaxy. There was no competition before, but this time the teams are more worried about themselves than what the other one is doing.

Galaxy players talked about collecting rent from Chivas USA. Players would often say they hated the other team getting the upper hand on them because they saw each other so often. In the parking lot, in the hallways, on the training fields. Unless players drive past one another on the 405, that is not happening anymore.

Each team will have very distinct preseasons and none of them will revolve around the other. The Galaxy will spend the first week of camp at StubHub Center before relocating to Arizona. There, the Galaxy will play Real Salt Lake in a friendly before heading back to Southern California for friendly matches against NYCFC, San Jose, and Vancouver as well as USL side Fresno FC.

LAFC meanwhile will stay home, where the club will play MLS sides Toronto FC, NYCFC, and Vancouver before an away game at Sacramento Republic FC on February 25 to close out the preseason.

Another relic of the old days was the constant player movement between clubs, which mostly went from the Galaxy to Chivas USA. In fact, the first player Chivas took in its 2005 expansion draft was Galaxy product Arturo Torres and that movement continued all the way through to the end.

LAFC has not looked to the Galaxy for players. LAFC has brought in Walker Zimmerman (FC Dallas) and Benny Feilhaber (Sporting KC) via trade, Marco Urena (San Jose) and Tyler Miller (Seattle) via expansion draft, Jordan Harvey (Vancouver) as a free agent, and Aaron Kovar (Seattle) on loan. Save for assistant coach Kenny Arena, Bruce Arena’s son, not much has come directly from the Galaxy.

Still, the Galaxy cannot help but to try and lay claim to ownership of the city. The club’s 2018 marketing campaign features the tagline and hashtag “Since ’96” as a reminder to everyone that the Galaxy has been around since the league’s inception. At the team’s jersey reveal event Sunday, former Galaxy players Mauricio Cienfuegos, Carlos Ruiz, Alexi Lalas, Kevin Hartman, and Cobi Jones were present, donning their respective old jerseys, perhaps as another reminder of the Galaxy’s storied past.

LAFC though has countered the Galaxy by playing up teams’ respective locations. LAFC’s new stadium is inside the Los Angeles city limits. The club’s current training grounds are in Los Angeles proper. The team will move to its permanent training facility at some point this season on the campus of Cal State LA. That’s also in LA proper.

The Galaxy has never actually called Los Angeles home. From 1996 to 2002, the club trained and played in Pasadena. After opening the Home Depot Center in 2003, the Galaxy moved right through Los Angeles and into the South Bay. StubHub Center and its massive training facility sit on the campus of Cal State Dominguez Hills, which are all in the city of Carson. The Galaxy does not even have Los Angeles in its name. The club’s official name is “LA Galaxy” not “Los Angeles Galaxy” and has been that way for some time.

LAFC was quick to point that out. When MLS released club schedules earlier this month, LAFC referred to Carson as its away opponent on March 31 and August 24, the dates when LAFC will visit StubHub Center for games against the Galaxy.

Two teams in Los Angeles, or Southern California depending on the perspective, is happening in earnest once again. Just a few days into the 2018 MLS preseason has shown that this rivalry will blossom into what the previous one didn’t. It’s now a true battle between two distinct teams offering their own unique brand and philosophy. This is how derbies turn into clasicos, and it starts in 2018.