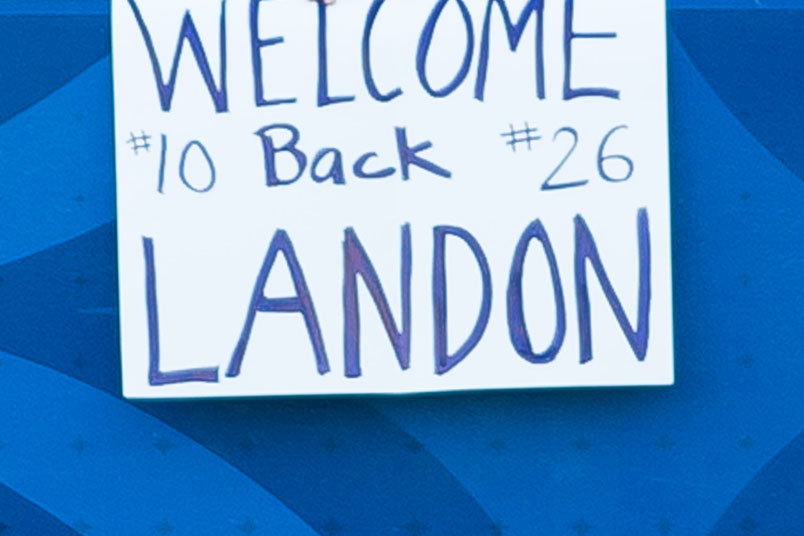 By Luis Bueno – RIVERSIDE, CA (Jan 17, 2018) US Soccer Players – All of us have heard at one point or another that good things come to those who wait. This may be true, or it may be a nice way of telling someone to sit down and wait their turn. Either way, the saying rings true for Landon Donovan and his supporters. Donovan has come out of retirement for the second time, but this time he is not returning to the Galaxy or MLS. This time, he is giving North American soccer what it has desired and needed for many years.

Donovan is now a member of Leon, presented to the Liga MX club’s supporters and media on Monday. Donovan and Liga MX is a better match than any dating app can ever hope to make. Donovan’s attributes and skill has always seemed well-suited for the open style of play preferred down south. Finally, both sides of the border will get to see it all play out.

Now, though, it’s still enticing. Donovan can’t possibly be match fit at this point. Having gone more than one year without playing competitive soccer, it is not reasonable to expect Donovan to step right into Leon and start dominating the way he did with the Galaxy. Even when he returned to the Galaxy for the latter part of the 2016 season, Donovan was not quite the same player he had been when he left.

Certainly, he’s aware of his lack of high-level fitness. He even joked to Leon fans during his presentation that he would need oxygen tanks at the ready. Still, during his time with the Galaxy, few worked harder than Donovan. Few, if anyone, was in as good of physical shape as he was.

Donovan looks more like a soccer player than a retired soccer player. He looks like he maintains his fitness at a high level. Donovan is a hard worker and plays that way too. With the Galaxy, he constantly drifted back and defended and was up near the goal when the Galaxy would recover the ball.

One of the most important goals he ever scored was due in part to his work ethic. Against Algeria in the 2010 World Cup, Donovan raced past two Algerian defenders on a counterattack in the dying moments of the group stage before slipping the ball to Jozy Altidore. After a save on a shot by Clint Dempsey, Donovan was alone in front of the goal. While the Algerian defenders stopped, Donovan did not.

It’s that lack of complacency, that drive, and determination that has forever separated Donovan from the rest of the pack. To think that at 35-years-old Donovan will not be able to rekindle that and find the motivation to succeed is not only foolish but probably fuel for his fire.

Donovan naysayers have always been loud. His critics used to point out that while he scored big goals for the Galaxy and the USMNT, he could not compete at the biggest stage. Donovan silenced his doubters after he torched English Premier League opponents with a pair of successful loan stints at Everton in 2010 and 2011.

In MLS, Donovan was able to help lift the Galaxy out of David Beckham’s shadow in leading the club to the 2014 MLS Cup title, two years after Beckham retired. Once Donovan left, the Galaxy fell apart. The club has not been the same since.

Donovan is an important player because of the intangibles he possesses and his touch and awareness and physical attributes. Donovan turns 36 in March. We know that some of those physical attributes will not be the same. Time does that to the greatest of soccer players. Time will not slow down Donovan’s awareness level. Nor will it keep Donovan from wanting to succeed in a new frontier.

To succeed in Liga MX will mean winning over fans who, despite Donovan’s inactivity with the USMNT over the last four-plus years, still hold a healthy amount of rancor toward him. Mexican fans also respect him. Donovan won some fans over already simply by showing up. According to published reports, more than 6,000 fans turned out for Donovan’s presentation in Leon on Monday.

It is unclear when Donovan will suit up for Leon, but he likely will not play a role for a few more weeks at least. When he does start training and start to get his soccer fitness back, Donovan will need to prove himself. He will not be given a starting spot but will have to earn it. Leon is not a desperate club trying to stave off relegation and reaching for one last marketing push before falling into the obscurity of the second division. Leon is a team that reached the playoffs last season and has started this season off with two wins in two games.

Leon is also battling for a playoff spot along with every other Liga MX club. The short-season format means that Leon has just 15 games remaining in the Clausura and the need to gain as many points as possible is there. If the team hits a dry spell and Donovan is close to or at match fitness, expect to see Donovan gaining ample playing time.

Once that happens, we’ll finally know what Landon Donovan can mean to Liga MX. His vision and awareness, touch and passing ability will be on display in a league that will welcome it.

Even at 36 and with as much inactivity as he has had in recent years, Donovan will succeed in Mexico. His return will be worth it. Everyone has shown patience to get this far. A little more and many positive things will certainly follow.