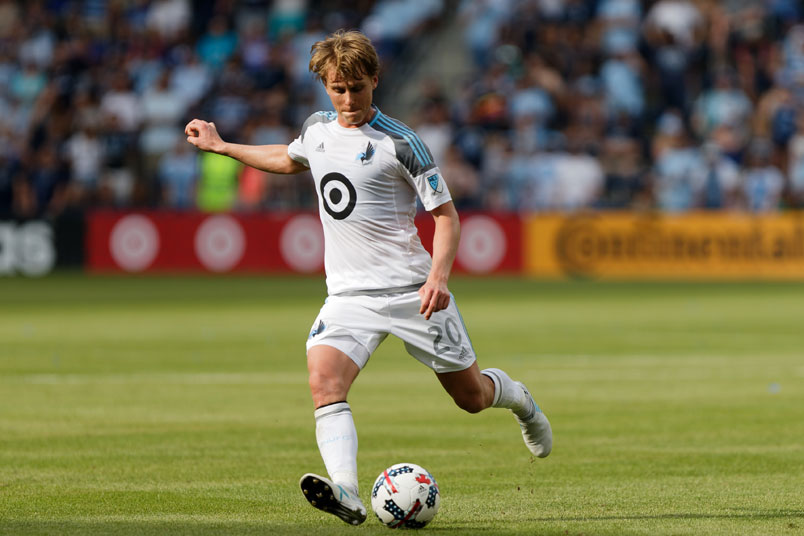 By Jeff Rueter – SAINT PAUL, MN (Jan 4, 2018) US Soccer Players – In many ways, 2017 was the most eventful year for Major League Soccer thus far. For the first time in nearly a decade, the East was the dominant conference of the two. Trade announcements included the amount of allocation money swapping hands, allowing for more detailed analysis of these moves. Between the Gold Cup and World Cup qualifying, every team had to navigate international call-ups and keep their rosters sharp.

On the field, the quality of play improved once again. Established stars like Diego Valeri and Sacha Kljestan continued their dominance. Newcomers like Nemanja Nikolic and Victor Vazquez took to the league with aplomb. Even the kids, most notably Miguel Almiron and Tyler Adams, grabbed their chances by the scruff of the neck.

With a new year brings new potential for breakouts of under-heralded players. 2017 saw its fair share of players trending upwards, from defenders like Aaron Long and Brent Kallman to box score contributors like Dominique Badji and CJ Sapong. With the 2018 season still two months away, here are five early candidates to make the leap.

For the Homegrown forward, it’s never been a question of talent, as much as opportunity. Jamieson signed with the Galaxy in 2014 and only saw 519 minutes of senior team action in his first three years. He saw that number increase dramatically after Sigi Schmid took over in 2017. With a Los Angeles side in transition, the striker made 11 starts, scoring three times and adding an assist.

Fellow prospect Jose Villarreal was traded to Orlando City this winter, increasing Jamieson’s chances at minutes. His rise also comes in the midst of a rough patch for previous starlet Gyasi Zardes, who was played at left back briefly at the end of the year. The Galaxy finished the year as the worst team in MLS. It was the first time they’ve finished that low in league history.

It’s certain they’ll aim to improve this year, and key pieces are already in place. Both Jonathan and Gio dos Santos return, as does French winger Romain Alessandrini. That still leaves a prime attacking role open in Schmid’s system. With pace, size, and improving finishing, Jamieson may be part of the answer to the Galaxy’s woes.

While the Galaxy’s season was historically bad, Minnesota United’s featured possibly the worst first month of any expansion side to date. The Loons stumbled out of the gate, conceding five or more goals three times in their first four matches. The team licked its wounds quickly, retooling the roster throughout the entire season and relying on league veterans like Sam Cronin, Marc Burch, and Ethan Finlay to find respectability.

One sore spot was a poor contingency of Scandinavian-based players. Goalkeeper John Alvbage and Bashkim Kadrii saw their loans ended early. Vadim Demidov’s albatross of a contract will still be on the Loons’ books for 2018. Even Josh Gatt, signed from Molde, failed to get a minute of time before being traded to Colorado.

One player remains in contention for minutes, Finnish international Rasmus Schuller. The midfielder spent the second half of the year on loan to HJK after having his position overtaken by Ibson. The Brazilian midfielder was a standout, but turned 34 this past November. If he starts to show his age, Schuller seems poised to reclaim a starting role. With his vision, passing ability, and increased confidence after his loan, the Finn would be a good bet to grab hold of that chance.

Last week, I reported on Orlando City’s interest in Sacha Kljestan. The teams finalized the deal this week, with Orlando sending two players to Red Bull Arena. The first, attacker Carlos Rivas, will try to remedy his poor finishing accuracy and crack the Red Bulls’ rotation.

The second, Tommy Redding, seems more likely to claim a starting role. The US youth international was seen as one of the Lions’ best prospects, making his move to New York even more puzzling. At 20, the center back is just coming into his own, seeing his decision-making starting to catch up to his athleticism.

From Long to current Vitesse via Chelsea man Matt Miazga, the Red Bulls have a history of trusting young domestic center backs for valuable minutes. Their current core includes Aurelien Collin and Damien Perrinelle. Both Frenchmen are over 30, leaving the door open for the younger Redding to stake his claim for minutes.

The Lions made a good bit of business that flew under the radar, signing two-time NASL Golden Boot winner Stefano Pinho. Orlando will be the Brazilian’s fifth team in as many years, but his nomadic past hasn’t been due to a lack of talent. Having come up through Fluminense, Pinho broke out in 2015 with the now-defunct Fort Lauderdale Strikers. After a year in Minnesota, he returned to prominence last year with Miami FC. Now in the top-flight, the pacey striker has a skill set that should carry over to the next level. If Orlando is going to finish above the red line, it’ll depend on it.

Orlando may have undergone the most dramatic facelift thus far in the East, but up in the Pacific Northwest, the Timbers are embracing a new look of their own. Mainstays Caleb Porter and Darlington Nagbe are gone, and Fanendo Adi is linked with a move to China.

Portland took an encouraging first step to staying among the West’s elite by signing former New York Cosmos head coach Giovanni Savarese. Among the most successful coaches in the US lower divisions’ history, the former MetroStar won’t be satisfied by less than a playoff berth in his first year at the helm.

Nagbe’s exit leaves a massive hole in the Timbers’ lineup, with his ability on the ball able to do the work of a central midfielder and a winger, seemingly in unison. While he may not have the same pace as the US international, Jack Barmby’s ball control and on-field awareness make him a prime candidate for increased minutes. The former Leicester City man saw his time take a dip in his second year under Porter, but with a new head coach comes a new chance at a first impression. The 23-year-old from England can play centrally or out-wide, allowing him to fit into whatever formation Savarese prefers with his new club.

As long as Diego Valeri is in Portland, the Timbers will be a playoff contender. Barmby may be a crucial piece to helping get the Savarese era off to a strong start.