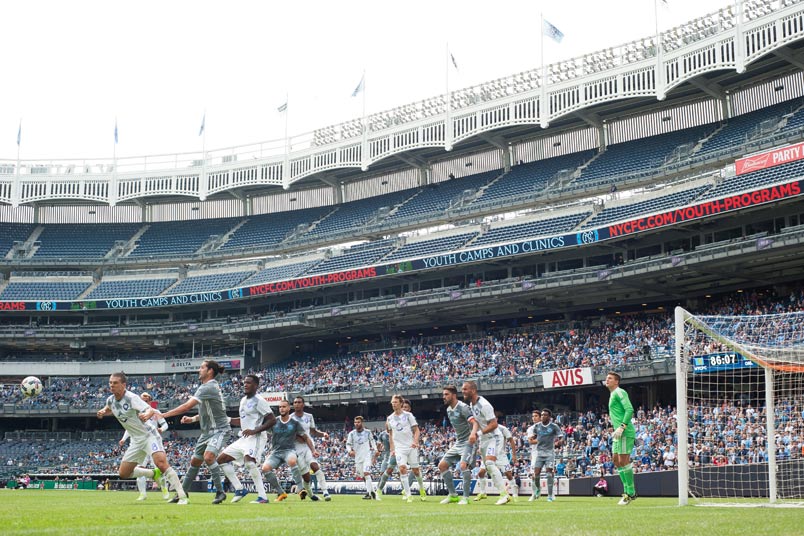 By Jason Davis – WASHINGTON DC (Jan 31, 2018) US Soccer Players – Two of the most active clubs during a busy MLS offseason happen to have come into the league together back in 2015. NYCFC and Orlando City have been on divergent paths since an inaugural year that saw both come up short of the MLS Cup playoffs. NYCFC is now among the Eastern Conference elite. Orlando City is still chasing a first-ever playoff berth. Both are showing plenty of ambition as training camps open and the transfer season hits its climax.

Patrick Vieira’s NYCFC fell to Columbus in the Eastern Conference playoffs despite a 2nd-place finish in the regular season. Back-to-back playoff disappointments mean something of an overhaul of the roster heading into year four. David Villa remains as the leading attacking figure for NYCFC at the front of the formation. The 2016 MLS MVP will be surrounded by a revised cast of characters this year, with Jack Harrison departing for England and Khiry Shelton traded to Sporting Kansas City.

There are holdovers. NYCFC will need more from Jonathan Lewis in his second season. Rodney Wallace figures to again be a menace on the wing when given a chance. Maxi Moralez fits in perfectly as a new addition last season in the center of midfield. He’ll carry most of the creative passing load in front of holding midfielders Yangel Herrera and Alexander Ring.

The retirement of Andrea Pirlo after three strange seasons in the Big Apple opened up a chance for the club to go after a younger, more dynamic player to fill a Designated Player slot. The club signed Jesus Medina, a 20-year old Paraguayan who caught the eye of NYCFC’s sister club Manchester City before landing in MLS, to fill the slot. Medina is fast, technically sound, and appears capable of matching the level of fellow Paraguayan Miguel Almiron in terms of impact in his first season. He’ll likely start on the left side.

Sporting director Claudio Reyna naturally heaped praise on Medina when announcing the signing, saying the midfielder will fit well into the club’s preferred style of play. With the narrow confines of Yankee Stadium when City is at home, Medina’s ability to navigate tight spaces and move the ball quickly will serve the side well. Working in combination with Moralez and Villa will be of primary concern.

Medina is NYCFC’s flashiest signing this offseason, but the club also added depth at forward and turning over the right back spot. On paper, the club has improved, and they’ll again be favorites to make the playoffs.

As busy as NYCFC’s offseason has been, it doesn’t hold a candle to the revamp happening in Orlando. After two years on the job, Orlando City coach Jason Kreis is anxious to get the Lions into the postseason. That ambition prompted a series of big moves over the winter, with players arriving from both inside and outside of MLS. The overhaul also includes a messy and high-profile exit for a player who has been central to the club’s efforts since entering MLS in 2015.

First, the messy exit. Cyle Larin’s choice to press the issue over the MLS-standard contract options Orlando City held on the forward ended with a transfer to Besiktas in Turkey just this week. The Lions negotiated a fee for the Canadian but expressed anger over the way Larin and his representation forced the issue. Considering their acquisition of Dom Dwyer last season and the moves made during this transfer window, it’s unclear if Orlando is upset because they couldn’t keep Larin or because they lost leverage with Besiktas.

Either way, Orlando acted like a club ambivalent to Larin’s presence in 2018. Dwyer returns for his first full season, and the club acquired an arsenal of attacking talent to play behind him.

Sacha Kljestan is worthy of the first mention because of his best-in-MLS assist totals over the past three seasons. Orlando traded away two promising young players to get Kljestan, an indication of their intent for 2018. The midfielder fills the void left by the departed Kaka and should improve the Lions’ ability to create chances.

As should Josue Colman, a 19-year old Paraguayan who joins from Club Cerro Porteno. Colman cost the Lions an undisclosed seven-figure sum and represents the club’s attempt to tap into the South American player market, perhaps with an eye towards a future sale. The playmaker may take some time to acclimate to MLS, but he’ll be counted upon to add to a dynamic element to the Orlando City attack.

Colman is something of an unknown. Justin Meram is not. The 29-year old attacker arrives in Florida after spending seven productive years in Columbus, where he scored 13 goals and collected five assists in 2017. The Crew acquiesced to Meram’s trade request and found a willing partner in Orlando City who shipped $1million in allocation money Columbus’s way. Meram figures to slot into the wing spot he manned in Ohio or underneath Dwyer in a two-striker setup.

The club also added a couple of new professionals in Cam Lindley and Chris Mueller, players who appear ready to earn first team minutes as rookies.

On Tuesday, Orlando continued the allocation spending spree by sending $400,000 in TAM to FC Dallas for the top spot in allocation order. With that spot, the club acquired former Sporting Kansas City midfielder Oriol Rosell.

Rosell returns to MLS after three-and-a-half years on the books with Sporting in Portugal. Just 25, Rosell is an above-average defensive midfielder with excellent passing skills and strong soccer intelligence. He joins a team currently rich in central midfielders, though it stands to reason that Orlando will thin the group before the season gets underway via a sale.

Orlando still has work to do defensively. Even so, what they’ve already done will change things in 2018. Orlando’s spending means that they’re all in on this season. They’re betting on a big return.